Most people aren't familiar with this little island off the coast of England in the Irish Sea.  People have been living there since 6500 BC.  That's quite a long time ago.  Originally part of Norway(??), it was ruled by Scotland and occasionally England.  Today, it is an internally self-governing Crown dependency.  One of these days I should visit.

My grandfather and his relatives came from the Eastern side and lived in Ramsey, Maughold and Ballaugh towards the West coast.  As you can tell, my interpretation of the spelling from my book was not totally correct.  I rather like the "Calf of Man" at the very Southern tip and of course Chicken Rock. 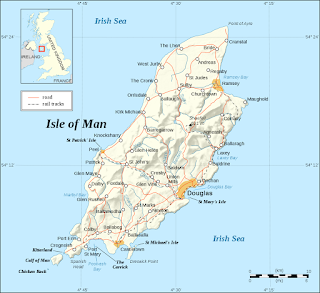 My relatives (whoever they were) that researched this project could only go back as far as John Steffen or maybe it's Stephen to the early 1700's.  His wife's name is not listed in any of the parish records.   His first born son John, lived in Ballaugh and married Catherine Craine.  John, Catherine and their baby son John (see? there are three Johns there) died within two months of each other.  Cholera is my guess.  Their only other child, a daughter also named Catherine, then just five years old, inherited everything.

Unfortunately, the guardian appointed to handle the estate for the five year old, sold it all and ran off with the money.  Ten years later, he was arrested, taken to court and ordered to make good any losses to the Estate, which of course never happened.  I guess there have been scoundrels since forever.

This is the Isle of Man flag ... weird, right?  I've always known of the three legged running man ... it was embroidered on every handkerchief in our house.  There was no such thing as Kleenex, you used a hankie!!  A "pressed" hankie that I ran through the mangle iron.

The crest shows the crown of England and birds of the countryside.  Their motto ... and I have no idea where THIS came from ...    is "whichever way you throw it, it stands". 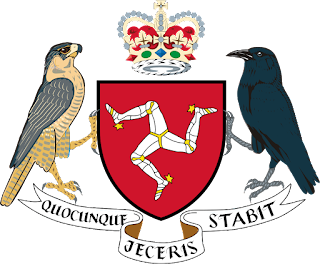 There were many children along the way who died in infancy.  I guess that's why they all had so many.  The late 1700's were known for sickness and disease.  Cholera, scarlet fever, distemper, chin cough and stitch (whatever that was).  I have found two children who died in accidents on the beach, I assume of drowning.  How sad.

My great great grandparent's brother Bill Crellin died in Ceylon while in the Army and his brother Thomas died in a shooting accident on the farm.  Occupations are listed from Landowner to Ag Laborer, with a servant or two thrown in for good measure.  In those families that had success in life, all of their children were listed as Scholars in the census.

There were a couple of wine merchants, contractors, a tailor or two and even a grocer.  Later on, the War took it's toll on many family members.  All of the able men fought in both Wars, many never to return.

One of my more interesting collections, salvaged literally from the garbage can where they had been discarded, is a packet of letters sent during the war, between family members and their sons, with sections blacked out.  I'm going to pull those out and see whose name is on them.

I never had any idea just how much information was out there on the internet.  All, or at least most of those parish records from the churches and census records from the late 1700's are all available on-line, unlike in the old days when my relations traveled to the Isle and went through the records page by page.  You just have to be careful with names and pay particular attention to dates.  In my family, there are probably 20 Isabellas, Johns and Janes, with many having the same last name.

I took a big load off my shoulders yesterday by completing all that accounting work in one fell swoop.  Six solid hours of sitting at a computer inputting information.  It wouldn't have taken quite so long, but she had upgraded everything on her computer ... making it difficult for me to figure out the new programs, not to mention the missing bank statements.

At any rate, I'm done for the year (except for MY accounting).  Like the mechanic who never works on his own car, I have a hard time doing MY year end work.   For now, it's time to sit back and enjoy Christmas week with my puppies.