Terrible picture of a phone, but it's hard to take a picture of your phone using your phone, right?  Back in the old days of Dell Computers and Microsoft Windows where I worked ... even before Windows had numbers ... if anything went wrong, you could hit Control-Alt-Delete and a screen would come up listing everything that was happening on your computer.  If a program was giving you problems or had locked up, you could just highlight it and hit DELETE.  Magically, THAT program would close down, leaving everything else running.

Problem solved!!  Open the program again and everything would work perfectly.  Oh how I pine for the "old" days.  Yesterday however, I did discover that Control-Alt-Delete is still alive and kicking in my phone.  I know it went for a swim recently, but has been working just fine ever since.  That is until last night when I put it on the table and it went black.  Uh oh ... that's never happened before.

Nothing I did could revive it.  I pushed every button twice, plugged it in, shook it ... everything I could think of ..... and nothing.  It's a terrible BLACK HOLE feeling.  I have no communication with the world AT ALL!!  What if something happens?  How did I live previously with no cell phone?  I suppose I could use Facebook on my computer.

I'm now imagining trying to get a new phone before Christmas ... good luck with that ... and I'm sure the price tag will cause a heart attack.  I gave up and sat dejected on the couch.  About an hour later, it hit me.  Control-Alt-Delete!!!  YES!!  I can do that with my phone!!  I held down the two keys at once for a count of ten and held my breath.  A little Apple light appeared!  SAVED!!!  I'm so excited I'm doing a little dance.  What a load off my shoulders.  It's now working just fine!!  Sometimes that old tech stuff still works!!

It's a good thing it was working when I cooked that turkey so you could see my beautiful bird.  I said there was good and bad ... here's the good part.  I cooked it uncovered at 350 for 1-1/2 hours.  It was nicely brown and beautiful when I covered it with foil and placed it back in the oven.  Verne said about 3 hours total.  WRONG!!  Here comes the bad part.

In another hour, I checked the temperature for the 145 degree "perfect" mark.  I watched in horror as the arrow climbed all the way up to 180.  I yanked out the gauge ... no use watching it go further.  RATS!!!  I sat the bird on the counter and waited.  Fifteen minutes later when the temperature was probably closer to 200 rather than 160, I cut it up.  The bad news .... it was WAY overdone and not the least bit juicy.  Tender, but dry as the Sahara Desert. 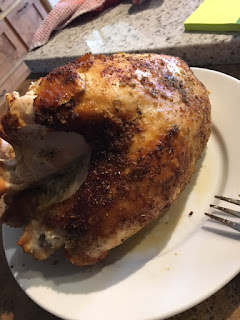 It tasted delicious, you just needed a glass of water with every bite.  Maybe lots of gravy will help keep it from the graveyard.  I dumped all the drippings into a saucepan and made delicious gravy like my Mom used to, adding a couple cups of potato water for a little more flavor.  I actually even cooked some broccoli and made these up for the freezer.  Instant dinner!! 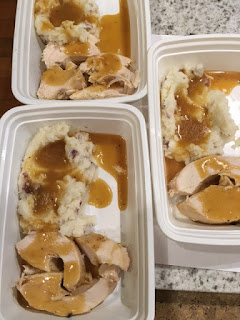 So for the second time, I was pretty dejected.  I had such high hopes for this bird.  My advice is to cook the turkey until it's brown, cover it with foil, then check the temperature every half hour or so.  I'm determined to fine tune this recipe since I love turkey so much.  You will probably see this again.

In other good news, I'm typing this morning, which means I survived the 60 mile drive in the horrible rainstorm last night.  There's nothing worse than driving at night with my bionic eye lenses ... unless it's driving at night when it's raining cats and dogs!!  That's tomorrow's story!!

Posted by Nancy Kissack at 6:54 AM