It Was a KNOCKOUT in Round One

Kitchen appliances and I were not meant to be in the same room.  I'm not sure why that is, but they definitely have something against me!!  Since it was so cold and rainy yesterday, I decided to make those cinnamon rolls my Mom was known for.  It's easy, right?  Although MUCH more time consuming than I ever remember. 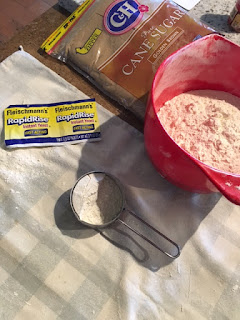 So I mixed everything up, paying particular attention to the temperature of the water/yeast mixture, even going so far as to heat up the mixer bowl.  According to the directions, just add the flour and knead for 5 minutes.  Since I have this handy dandy KitchenAid mixer, I figured to make quick work of the kneading part.  What could possibly happen???? 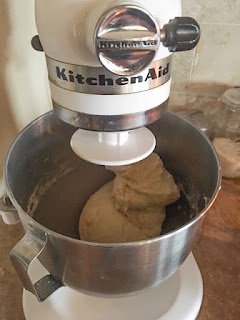 You can get your hand crushed ... that's what.  The dough was stuck up at the top of the dough hook, aptly named I might add.  I turned the machine off ... really, I did ... but was dumb enough to keep my left hand on the switch.  As I reached in and pulled the dough from the hook, my left hand accidentally hit the switch before my right hand was out of the bowl.  It was a knockout punch in the first round.  DING DING DING!!

The hook immediately caught my hand between the large round harder-than-steel white disk at the top and the edge of the steel bowl.  I'm pretty sure they heard me scream all the way into town.  I actually had the thought .... I'll just let that dough rest while I immerse my hand in freezing cold ice water ... which I did.  In no time, I couldn't feel a thing as it swelled up like a balloon.

The good news was that I moved my fingers almost immediately, so I assumed nothing was broken, more or less.  I tried to keep it up in the air to lessen the damage, but there was an entire batch of dough in the mixer that needed to be attended to. 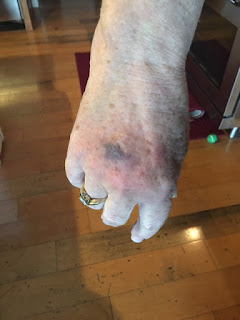 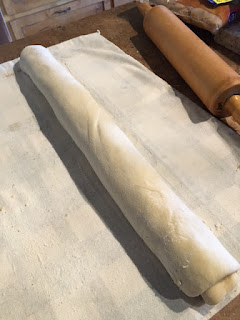 Have you ever tried to cut with a sharp knife left handed?  I wasn't giving up, no matter how awful they looked.  Into the pans for another rising and baking.  In the meantime, I sent a picture of my hand to my Nurse Patty for her official opinion.  Yup I crushed it, keep it iced and in the air. 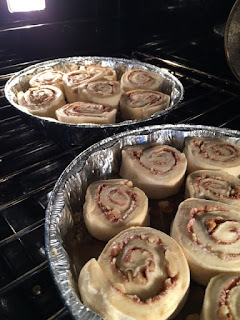 It's actually much better this morning, in spite of the lovely shades of black and blue.  One knuckle has returned and I can almost make a fist.  The rolls came out great, but I was rather distracted by my hand and didn't get any nice pictures.  You'll just have to come to the RV Rally in Indio California to see them in person. 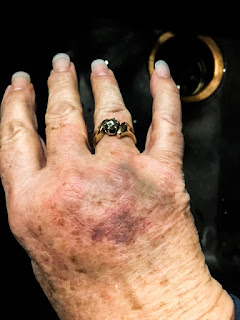 Not taking any chances at all, I tossed a California Pizza Kitchen pizza in the oven for dinner.  My cooking skills aren't the best when I have TWO hands ... I'm not going to try and cook with only one. What can I say .... it was edible ... although I've never seen a pizza that had toppings laid on ultra thin like this one.  I would have fixed it up, but that would require two hands to grate the cheese.  I'm not going there. 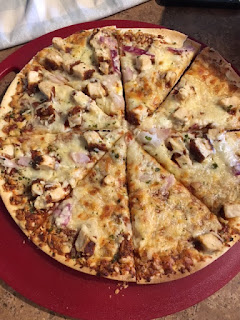 To make things even better, since it's Christmas and all, I woke up with a sore throat.  As you may be aware, it's just normal for me to end up in the Emergency Room on Christmas Day.  I don't have much time to heal up before takeoff, so I'm spending the entire day on the couch with the puppies and a bottle of wine!!

MERRY CHRISTMAS EVE TO EACH AND EVERY ONE