For those of you with grandkids, you will probably be singing that song all day now.  The Disney movie FROZEN played on television yesterday and today I feel like she came to the Central Valley.  At 27 degrees the last two nights, I am definitely FROZEN.  This is my white frost encrusted horse corral ... giving me a sense of what it's like to live back East.

My house wasn't much better at 62 degrees when I got up.  Who the heck set the heater THAT low?? 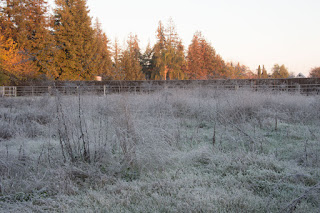 Having wrapped the presents for the Elks kids, yesterday was S-Day.  Santa Claus was coming to town and we needed to get ready.  First up ... get the soldiers to stand at attention.  This is just the cutest decoration I've seen.  I may have to find one of these for my house.  At this party, the Grinch is Santa's helper, but unfortunately, he wasn't any better at pronouncing the kids names than Santa was. 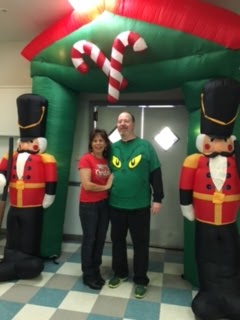 We set up plates and plates of cookies and got the ice cream out of the freezer.  After six tries, looking in every drawer in the kitchen, I finally found ice cream scoops the size of Montana.  That created a slight problem when our little plastic cups were no more than Manhattan.

For some reason, I keep getting stuck with the project that requires lots of calculations, like figure out how much water it takes to make hot cocoa with 78 ounces of mix.  There I was, boiling water on the stove again!! 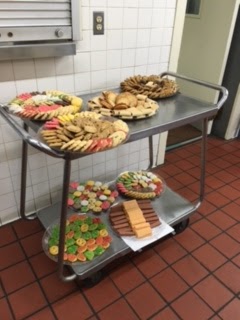 Once Santa got a good start, we brought out the food and the cocoa.  I have to say that was the best cocoa I've ever had!!  Seems like no one ever sits down with a cup of hot chocolate any more.  I even topped everyone's cup with a shot of ......... whipped cream.  It was suggested I use peppermint schnapps, but this was a kids party!! 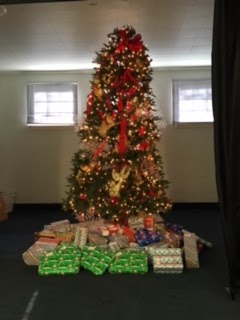 When all was said and done, there were 85 happy kids running around like crazy, stoked up on sugar enough to last at least a couple of days.  Honestly, I think this party was more for the Grandparents than the kids.  They all had a blast taking pictures, wiping cookie crumbs off their laps and cleaning up hot cocoa from the floor on their hands and knees.  Fun, right?? 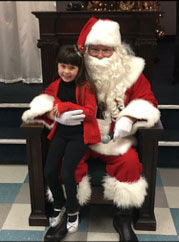 It is an interesting phenomena that when it comes to serving the food, there are ten volunteers who show up at the last minute.  When the line dwindles down to nothing, they magically disappear.  It's the same three of us who bus all the tables, pick up all the trash and wash everything down.

In the end, there were only two of us to clean all those 125 ice cream dishes.  I didn't mind at all because he's the best looking guy around in my opinion.  I know what you're thinking because I thought the same thing, but alas, he's married.

What a mess ... and ice cream is not the easiest thing to clean.  Yes, we had a dishwasher, but it's old and tired, forcing the "wash before you wash" element into our routine.  Two hours later I was finally out the door.  My puppies were thrilled to see me, but being gone so long required an hour on the floor playing the ball game.

I want to thank everyone who mentioned statins for lowering your cholesterol may not be all they are made out to be.  I'll keep aware of any symptoms and head back to the doctor if need be.

I've waded through some of My Grandmothers information.  It's definitely difficult to follow when there are eleven children each having five children and so on down the line.  For now, I'm going to go stand in front of my fireplace and warm up.   I'm FROZEN!!!  Let it go, let it go, let it go ............