It's funny about RV'ing ... you meet the nicest people.  Even better, they become like family that you get to visit every so often, especially at Christmas.

A few years ago, having barely met Barbara and Tom Westerfield, they took me under their wing and on a tour of the United States.  Pretty crazy, right?  Turns out when they are not on the road, they live about 70 miles away ... perfect for dinner dates.  As luck would have it however, I picked Thursday, which became the predicted rainiest day of the year in California.  This time they got it right.   Tom really did smile, I just wasn't fast enough with the phone in this picture in Maine I think!! 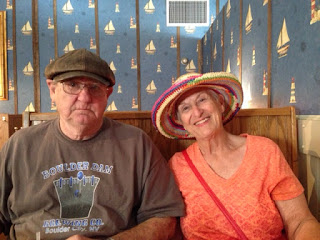 I left home in my big truck for safety's sake.  Baby is her name and she's a big, heavy 3/4 ton diesel Chevrolet truck.  I LOVE my truck.  She's gotten me out of some bad scrapes over the years and is still running strong with 103,000 miles on her.  It was barely spitting rain droplets when I left.

In case you didn't know, Thursday is truck day in Central California.  They all get together and schedule their loads on the same day so as to clog the freeways.  The further South I got, the more rain there was, so I just tucked in behind a couple of trucks and cruised along.  In no time, my windshield wipers were working overtime.  They didn't help at all.  I should have replaced those rubber thingies a year ago, not to mention the film inside on the windshield that hasn't been washed in three years.

No problem though ... I made it to the quilt store in Clovis where I planned on spending a few hours.  Fourteen yards of fabric later (enough to back four quilts) at a big discount, I was done in no time.  Two hours to kill before meeting the Westerfields at Macaroni Grill.  This is Barbara and I at the Albuquerque zoo. 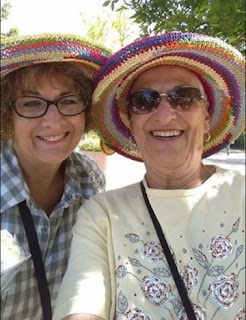 By now the rain is really coming down ... like cats and dogs ... and my poor little umbrella just isn't doing the trick.  After a little shopping, I headed over to the appointed spot to wait it out.

That's when I spotted the big red box.  After skirting around the water dripping from the ceiling INSIDE the restaurant, Barbara presented me with salted caramel toffee bark.  YUM YUM!!!  This box steps into the spotlight in no time at all. 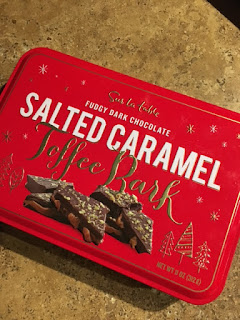 Dinner was okay .. not the best I've ever had and the service was iffy (we had to ask for bread several times and never did see the grated cheese), but the company MORE than made up for it.  There is a new GREAT grand baby in the family with another one on the way.  Time flies when you're having fun and in no time, I had to get home to the puppies who had been locked up for eight hours.

Turns out they had an even longer wait.  By now it's dark and my bionic eye lenses kicked in, meaning I can't see much of anything.  The concentric circles in my eyes make lights appear much bigger and brighter than they really are ... and that includes the reflections in the still pouring down rain.  No problem .. I'll just go slow.  And so I did .... until I remembered the red box I left on the seat in the restaurant.

I was about five miles away in 5:00 traffic, but I wasn't going to leave that candy.  After a trip through the entire parking lot of Children's Hospital looking for an exit ... I only wanted to turn around ... I made it back to the restaurant.  The nice manager had my candy in his office.  Back on the even more crowded roads, if that's possible, I slowly made my way on to the freeway.  California needs to put a LOT more reflectors on the highway to delineate the lanes.

There's a country crossroad that links the two freeways.  The alternative of 45 stoplights wasn't an option.  Trouble is, my eyes are even worse on a two lane road.  A two lane FLOODED road where the white line is just a ghost, if visible at all.  By now there is water everywhere in depths ranging from two inches to six.  With a long string of traffic coming my direction, I never could see the road well enough to miss the lakes.  Consequently, to the consternation of everyone behind me, we went 40 mph.  The only place I might have pulled over would have required a tow truck to pull me from the mud.

At long last I hit the second freeway and made it home in one piece.  It poured the entire way!!  The best part of the whole trip besides dinner with wonderful friends and the red box now calling my name, was the free truck wash!!

I've since heard from Jan Mains, long time RV driver, that yellow glasses help you see much better in rainy conditions.  I'm buying three pair, one for every vehicle.  It really doesn't bother me to drive in such conditions, but I'm sure it bothers everyone else because I go slower!!

It's Christmas time at the Elks, which means wrapping presents for every member's kids.  Santa arrives tomorrow, so that will be today's plan of attack.  I think I'm finally getting in the spirit!!