Mostly alive yesterday morning, by noon I was again camped out on the couch for the count.  I try very hard not to over-medicate myself.  Bad idea.  Take all those drugs you can so you will feel better.

There IS something to say about being so miserable you can't concentrate on television.  Instead, you can grab a nice hot cup of water (the lemon and honey are long past gone) and try to read.  Unfortunately, the brain was too muddled for that complicated past-time.  I kept reading the same page over and over.

Even my usual companion, an iPhone 6, got tossed on the table.  Sleep would have been nice, but that wasn't to be either.  At long last I picked up my phone again to see an Eagle Cam video.  In five minutes I was hooked.  In ten minutes my battery was dead.  I drug all of my blankets and supplies to the kitchen counter where I plugged in.

If you haven't seen this, it is pretty amazing.  Like watching paint dry at times, but amazing none the less.  Dick Pritchett has a live feed ... just click on his name.   There are four Eagle Cams in Southwest Florida that have been watching since 2012.  This picture is from this morning, just after M15 and Harriet traded places.  This is Dad. 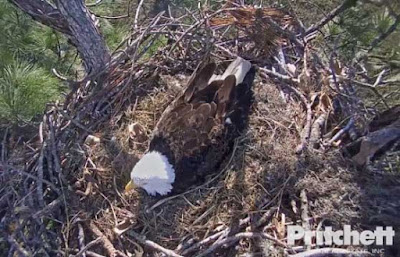 Ozzie and Harriet mated for life, but Ozzie got in a fight with an owl (don't trust me here ... I'm going on the word of Facebook people) and did not survive.  Harriet flirted with many local natives before picking Male 2015 ... or M15 for short.  Now they have a nice little abode and TWO eggs, just about to hatch.  I snapped THIS picture yesterday as Harriet was turning the eggs over, which they seem to do every hour or so. 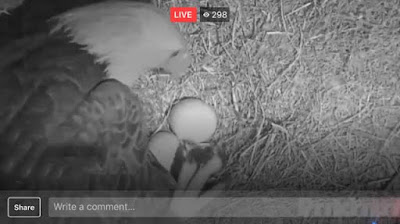 Feeling terrible, and with nothing else to do, I sat glued to the phone.  People are monitoring these cameras day and night.  When the eagle moves, they zoom in to see as much as possible.  It was dark in Florida, but they have an infrared cameras (thus the black and white pictures).

Although it is not visible here, as I watched in amazement, one of the eggs pipped.  In approximately 8 hours, there will be a new baby eagle in the world which everyone can watch on this live feed, if you have a couple of hours to waste.  At this particular moment, there are 46,583 people watching.  Crazy, right?  Do you think they are all sick on the couch like me? 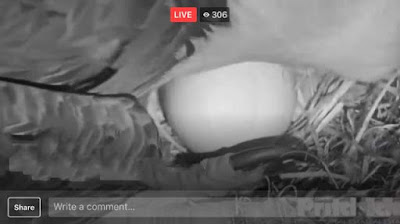 It's hard to tell Mom and Dad apart.  If you watch on Facebook, don't pay any attention to the fighting about whether it's Mom or Dad on the nest.  Who cares?  I'm just there to see the babies.  There are also trolls around causing havoc among those who are not the most computer savvy.  Just ignore them, or better yet, go to the Pritchett website and watch there.   The Pritchett site also has sound.  Facebook does not.

Being the good husband that he is, M15 has brought Harriet lots of food in the last couple of days.  When they switch, they usually take off and hunt.  At this point however, Harriet must be anxious about the pip, as she hasn't been going far away at all.

They just talked to each other with a few screeches, meaning move your butt, I'm coming in.  Mom Harriett just settled in and is doing a little housecleaning.  I could watch this for days!!!  I'll be on the couch with my computer and extension cord.