If there's one thing I love,  whether in the desert or the mountains, it's hiking.  When I learned there were hiking trails all around the park and over the hills, I was on it like a spider on a fly.

It was supposed to be a relaxing, do laundry day, but that could wait.  I headed out early in a short sleeve running shirt I found under the bed, only to be greeted by people in heavy coats.  I must have misread the memo. 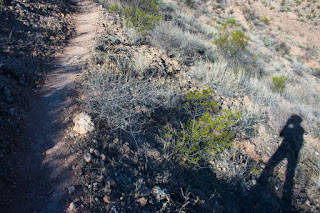 At the far end of the park, I ran into these babies ... Mr. Quail and his two wives.  These guys are just too cute!! 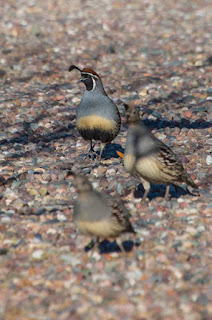 As I walked around the back of the construction building, I could hear birds everywhere.  They are quite vocal and obviously well fed, which doesn't surprise me.  Almost every site here has bird feeders out front. 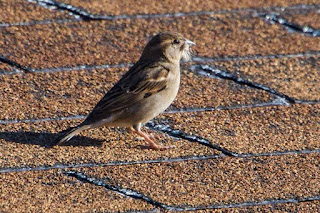 After traversing the desert around the entire park, I headed up the mountain to the water tower.  Good thing I wore my tenny sneaks because the trail is gravel slippery.  Even though I haven't gone up much in altitude, it sure gives you a beautiful view of the valley. 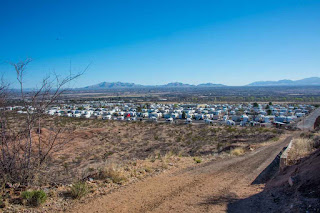 You can even see the trains paralleling Hwy 10 as they snake their way East.  That's the SKP park at the bottom of the picture.  Yes you can hear the trains occasionally, but just a distant whistle blowing. 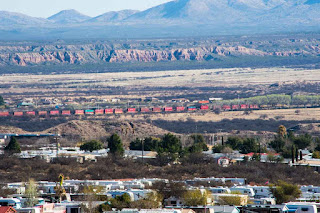 Keeping an eye out for rattlesnakes, the road turned to a narrow trail on top of the mountain ridge.  I was hoping to run into some critters, but even the birds abandoned this area.  I saw a few javelina tracks, but nothing else was breathing up there but me ... and I was sucking down the oxygen!! 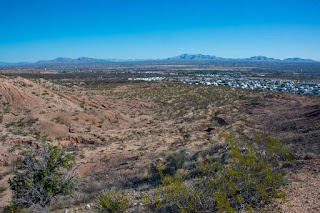 The thought did cross my mind that I was going to be sore after this, but the cactus in bloom made me forget all about it.  So far it's only been a three aspirin hike!! 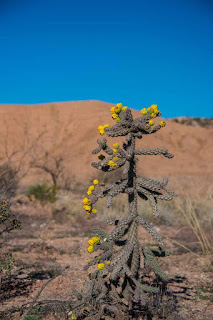 It appeared that you could hike all the way to Hwy 90 as I saw those houses I looked at previously, looming in the distance.  I actually found TWO trails, and was hoping to return on the second one.  Alas, even though I kept going just another 50 feet ... I never could find a way to get across the canyon.  I thought about going cross country, but the thought of lying at the bottom with a broken leg, didn't appeal to me much.

When I returned to the park, all those birds flying around caught my attention.  It's pretty hard to stalk a bird for photos.  You have to tippy toe a lot ... but I was finally able to capture several.  Of course I've no idea what they are, but they were pretty and each made a different kind of tweet. 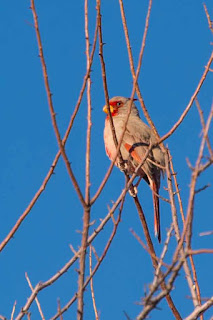 This must have been a very good tree ... it had about 7 nests ready for eggs.  It's funny how they were all in this one tree.  It must have been the best condo in the area. 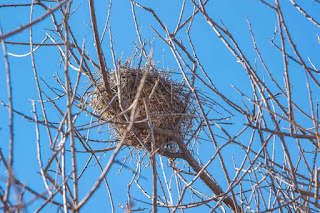 Many of the birds were easy to find due to their coloring!  This one wasn't the least bit afraid and stood his ground. 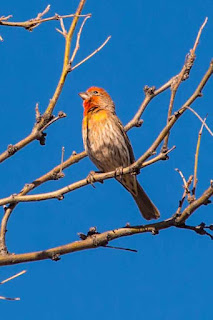 Back closer to the park, I could see the wash that takes flood water away had lots of tracks in it.  Since there were no clouds in the sky anywhere around, I walked along trying to figure out what made the tracks .... javelinas, dogs, humans? 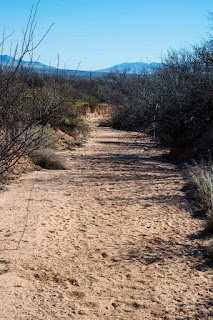 What I found were bunnies ..... LOTS of bunnies!!  I followed a couple to their holes, with several just running ahead and then out into the desert.  Finally one stopped long enough for a portrait.  Six in total ... cutest little white tails ever!! 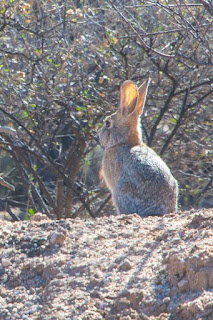 Just behind my rig was a tree full of birds.  I could hear them, but it was very hard to SEE them.  I finally caught this guy through the branches.  Once I looked closely, I found five close by in the same bush. 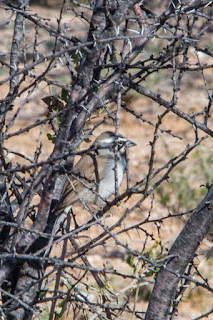 Okay .... last bird picture.  This was a beauty, just calling to his girlfriend like crazy.  Apparently she wasn't all that interested ...... 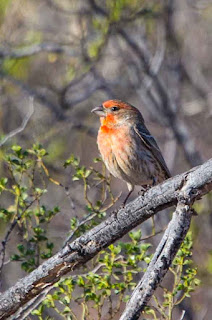 I spent the rest of the day doing laundry and seizing up on the couch.  Ever so often I would get up and stretch, in an effort to relieve some of the pain!!  Pizza for dinner help a little bit too!!

With a couple more aspirin under my belt, I'm headed to Bisbee this morning.  It's over an hour's drive, but there's a quilt store, not to mention the Copper Mine.  I hear it's an artsy town, but I've truly run out of room in my rig.  Hmmmm, I do still have the back seat of my car available.