What's All That Racket??

When I first arrived at the fairgrounds, I heard the sound of car engines racing.  Having spent some time around the race track at my home town, I knew it was what we called round-de-rounds.  That's guys spending lots of money on cars, then racing around oval dirt tracks for a $20 trophy.  That's a money-maker, right??

This was different ... what I was hearing was DRAG RACING ... and it was VERY close.  As my friend Lynn may remember, we spent time at the race track in Patterson with our 55 Chevys when we were in high school.  It was music to my ears!! 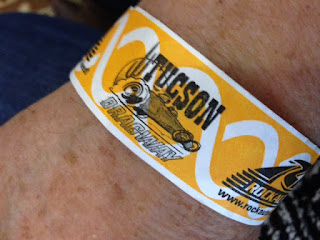 As soon as I could, I drove over to the track to watch and get some pictures.  Being it was late in the afternoon, they only charged me $5, saying it would be over in 90 minutes.  I was smiling from ear to ear!!

This is the first race I caught ... you can see the guy on my right red-lighted, meaning he left the line too early, an automatic win for the little yellow NiteMar car.  Many of these were street legal cars like this one. 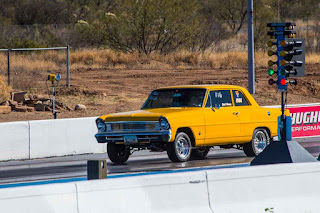 It's all about Ford and Chevy on the race tracks, with maybe a Chrysler hemi or two thrown in.  You can tell these guys have put lots of bucks and time into their cars! 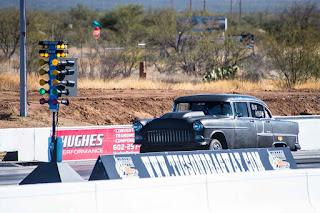 Nascar has taken over this little race track, and anyone who wants to race with the big boys, must get a license to do so.  It involves a medical check, a long application, fees for every level and a drive test.  Several of the cars today were being driven by newbys qualifying for their license. 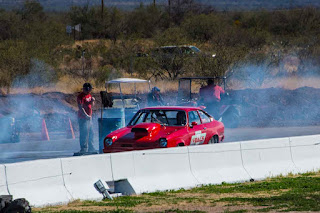 Surprisingly for a small local track, there were lots of big boy rails running.  Although the parking lot was full to the brim with trucks, trailers and motorhomes, the grandstand area was empty.  There was maybe six people besides me, so I crawled over every seat to the top in order to get better pictures. 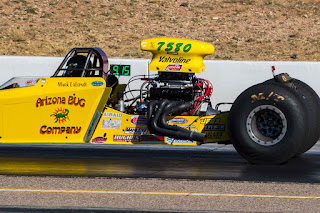 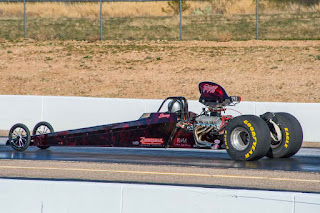 Sometimes the rails are paired up with street legal cars and trucks.  The much slower cars are given the green light long before the dragsters.  In the end, the dragsters always won!! 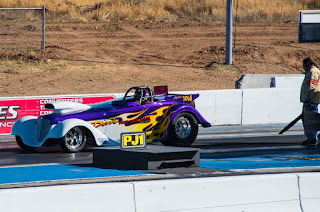 There was even a Ford F250 truck that raced a little Ford Falcon.  The truck won ... although it took him MANY seconds to get to the end of the track with a final speed of 101 mph!!  I'm pretty sure MY truck won't go that fast!!! 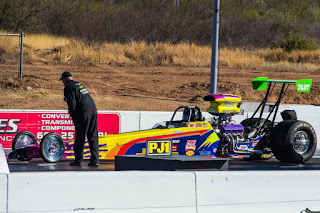 This guy had a little bit of trouble.  He did his burnout .... reving the engine with the brake on so the back tires spin and heat up, giving him better traction ... then killed the engine.  They pushed everyone in line back so he could get OUT of line, when the engine finally turned over again. 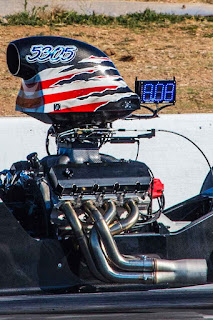 Once staged (front wheels on the line) he was able to make the run.  I love to see the slicks wrinkle ... this is the kind of shot I was looking for. 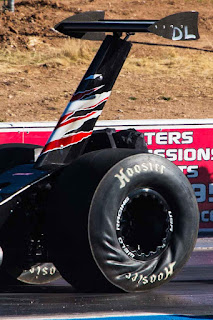 I was still smiling from ear to ear when I left.  It brought back many memories of racing my 65 GTO.  Wish I still had THAT car!!  Alas, it was stolen in Denver Colorado ... twice ... but that's another story!! 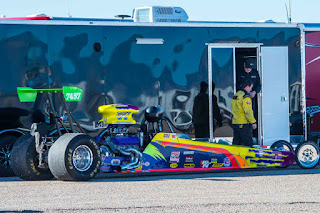 At these local races, the pits are open, allowing you to walk around and check out the cars up close and personal.  This one was loading up to head home with a lot less money in his pocket, kind of like me at the Desert Museum. 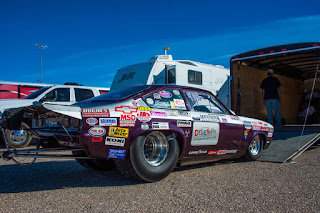 Yesterday was of course Super Bowl day.  I didn't really have a favorite, but decided to root for the Broncos.  What a game!!  The Panthers were SO favored to win, but they just couldn't beat Denver's defense!!  You GO Broncos!!  And kudos to Peyton Manning for making it all about the team and not himself and this record setting game.