Tubac is a little town south of Tucson, well worth checking out, even if it is now more of an artists haven.  Originally settled by the O'odham people, it was one of the stops on the Camino Real, the Royal Road to the California Missions.  In the 1840's, the Spanish and the O'odham Indians were attacked continuously by Apaches until everyone finally moved out.  In the 1900's it was populated again with farmers and ranchers.

The remains of the old Spanish Presidio still exist, along with a small museum.  Many of the original adobe buildings and homes are still standing, although sadly, some are in terrible disrepair. 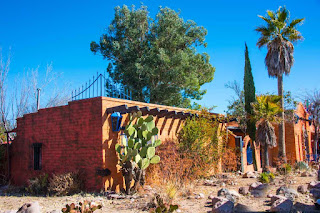 Tubac IS known for it's annual Festival Of The Arts, which just happened to be held last week.  Patty and I weren't passing THIS up.  It's a biggie ... the entire town is closed down and the streets filled with easy-ups as people sell their wares.  Some come from as far away as Colorado, just to set up here, so you KNOW there was good stuff. 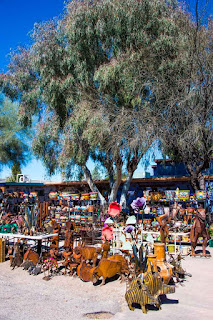 Not that there isn't enough cactus around, but if you just can't find the exact one you want, you can buy these varieties.  They're actually pretty amazing .... all made of metal!! 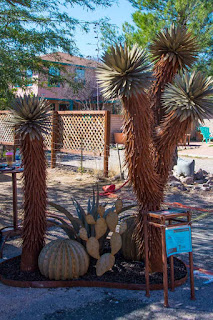 Four long streets were filled with vendors, selling everything from handmade clothing to the most amazing paintings, and of course many different kinds of jewelry.  Don't bother with your checkbook,  two or three credit cards will suffice. 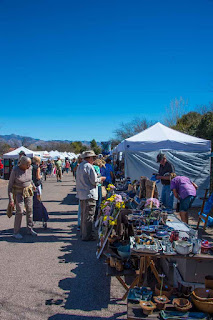 Here's an artist at work.  This piece was just amazing!!  She carved this beautiful little dog from clay, including a large collar.  By the time she gets done, you will see each individual hair on it's body!!  It's amazing how real it looks.  Once done, she will cast it in bronze.  Personally, I liked the clay version!! 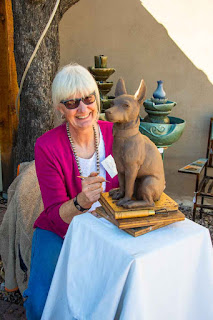 All of the regular stores were open, several we have never been in ... surprising, right? ... but we opted to hit all the outside vendors ... we can see inside any time!! 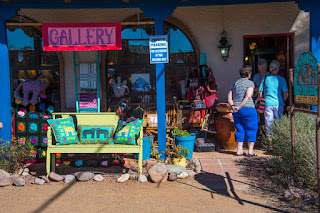 We walked back to the pottery shop by the Presidio, where I picked up another set of dishes.  Now I can have THREE people to dinner, four including myself.  All the new Talavera is dishwasher and microwave safe, as well as being lead free. 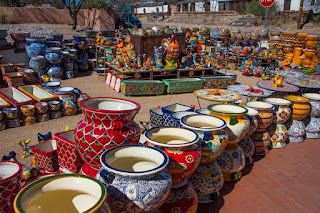 For all you woodworkers out there ..... this lamp is made from wood, with a copper shade.  Anyone want to give it a try?? 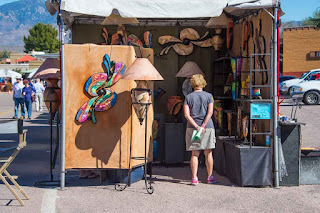 As we walked around, we found two Indians who make their own flutes.  Now those are amazing pieces of art.  I have five I think .... and I love to play them, although I'm not very good at it.  I almost had six!!  It's something that takes lots of practice, with the music coming from your head, or maybe from a cd you heard.  When I asked how he made that sound, one gentleman showed me how by controlling my breath.  I wish I could have stayed for a lesson or two, but we were headed home.

This gentleman played Mardi Gras music on his metal flute.  Were it not for the cactus, I would have thought we were in New Orleans!! 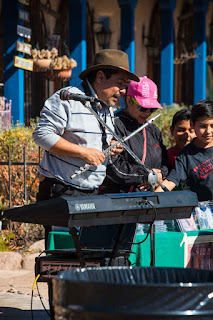 Most every building here has a bell ... I imagine to warn everyone of Apache Indian raids.  It's a beautiful little town you should definitely visit, even if there isn't much going on.  In case you want to set up shop, there's a commercial building (a really GREAT one) on sale for $495,000.  It even has an apartment upstairs.  I'm tempted, believe me ..... but the temperatures are quite a bit warmer this far South. 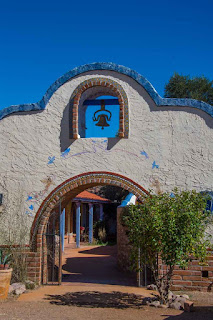 Back at the rig, with no air conditioning, poor Cooper was panting due to his long poodle hair, so I took a pair of clippers to him.  Unfortunately, they aren't the best pair I own, and he now has two bald spots on his back, but he's cooler to be sure!! 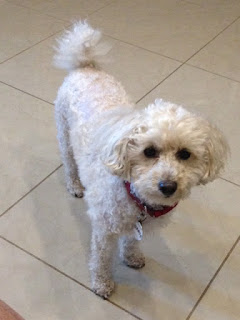 Happy Valentines Day to everyone ... I hope your sweetheart got you something sweet!!  Cooper, Jessie and Jonathan are my Valentines and each one is getting a treat today!!  AND ... there's a big barbecue happening at the Chance Ranch, to which I'm bringing a big potato salad.  Guess I better get busy!!