Going To The Dogs!!

After having seen enough of the stuffy horse show on Saturday, I wandered over to where I heard there was some kind of dog show going on.  An agility course?  Not knowing exactly what to expect, I headed for all the barking.

There was no crowd for this event, not even one spectator.  Just a lot of dog owners having fun with the babies!!  As I went inside the big covered arena, this poodle was jumping high with his ears flopping in the breeze, barking all the way.  I guess he was having a LOT of fun!! 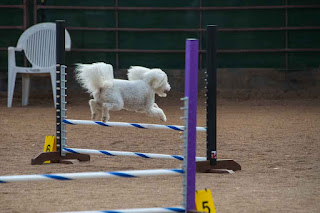 It didn't take long for him to get a little distracted however.  Off he ran towards the Judge, who sat quietly in his chair.  Finally, lured away with a treat, he went back to the course and finished it with tail flying.  I probably shouldn't have laughed, but I can SO relate!!! 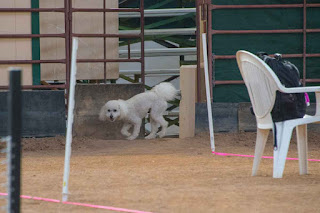 Now THIS is a beauty!!  They all sat patiently at the start line for all of two seconds, before chasing after that elusive treat.  There were apparently several divisions, from amateur on up.  Even though it appeared to be a competition, everyone was very laid back. 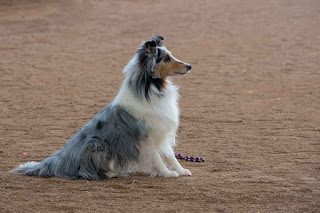 Many dogs were going so fast I had trouble getting them in focus!!  This was another barker!!  If they happened to hit the top rail, and some did, it was replaced by an army of owners.  No volunteers here!! 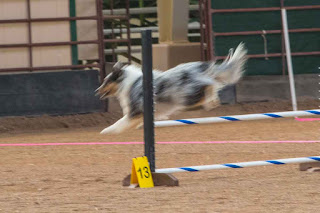 Some jumped from   W   A   Y    back and some jumped just as their nose touched the bar.  In this course they had to make 12 jumps and run through one tunnel.  You couldn't help but smile!!! 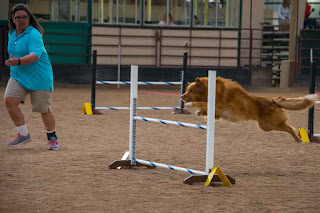 Not a single dog missed the tunnel ... not even the little black poodle, who after making the first jump, played racehorse around the entire course, barking at the top of his lungs.  He jumped up on the judge and almost escaped out a gate before the owner could get him stopped.  Even she was laughing as she gave him a great big hug ... the poodle that is!! The taller the dog, the taller the jump.  This whippet easily cleared the jump and was spot on all around the course.  Even though several of these owners were wearing Dog Agility Club shirts, they were more than willing to give me tips, show me the treats they give (all made in the USA) and allow me entry to take all the pictures I wanted!! 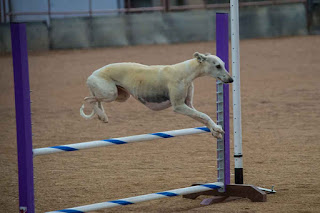 The shorter dogs, like a miniature corgi, only had to jump the bottom bar.  There might have been a few purebreds here, but most looked like mutts to me.  I just saw a lot of people who were having a GREAT time with their puppies.   Honestly, I don't even know if they were being judged.  I never saw anyone writing anything down.

After they finished the first jumping course, they moved over to the bigger agility course.  Thirteen obstacles in all, including four tunnels, many hoops to go through and two ramps they had to climb up. 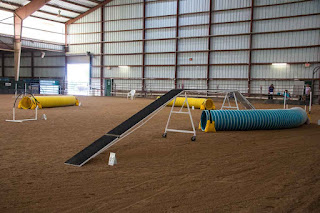 This gal had to go help with the setup, so I volunteered to hold her baby.  What a sweetheart!!  She slobbered all over me in no time!!  I'm guessing this wouldn't be something Jessie would be good at.  She'd be trying to bite every dog in sight!!  She would't be alone however, there actually were a couple of rasty babies who wanted to bite. 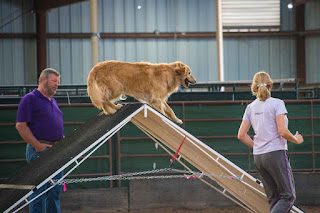 Cooper on the other hand, just might like to try this.  It's great exercise for the dogs as well as the humans, who are running trying to keep up!!  There was even one little old lady, I'm guessing in her 80's, who went through the course in a flash!!  She said the secret was to get a dog with short legs! 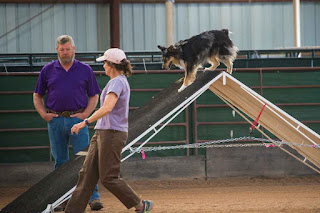 Now THAT was fun!!  So much so, that I went right out and bought some of those treats for my kids. I have to say in two short days they can "sit" and "stay" on command, as well as "wait" for the treat as it lays on the floor in front of them.  I may be on to something here!!  I just need a few dollars to make the jumps (I took closeup pictures) and to buy a tunnel!!!

At this point, I do unfortunately have to inform you that I was mis-informed.  On two separate occasions, the gals in the office told me Saturday was Gay Pride Day.  I even repeated it and they said yes.  Turns out, it was VAIL Pride Day.  I'm not sure if they were incorrect or it was their strong accents.   I only found out when I picked up some trash and saw an advertisement.  It didn't matter either way, everyone sure seemed to be having a good time!!

I was thinking I would try one more time to visit the Arizona State Museum, that is before I woke up with a sore throat. Everyone, even the natives, seem to be having allergy problems.   This may be just a lay-around, practice being a couch potato kind of day.