This One's For The Boys!!

The Pima Air and Space Museum is definitely one for the books.  It's the third largest in the world, but the LARGEST in the world supported by private donations.  My feet and back will tell you it's just downright BIG!! 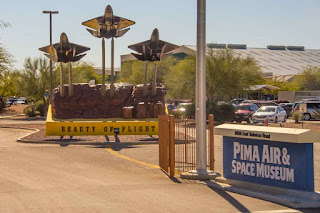 Since Dan and Patty had not visited this museum, Dan went early to get tickets for the bus tour of the Boneyard.  That's where they stash planes until they are used again, or dismantled for parts.  Eventually, they are cut up and sold for scrap.  It's mind boggling how many airplanes and helicopters they have here!!  This is a C5A that can hold four buses like the huge one we are on. 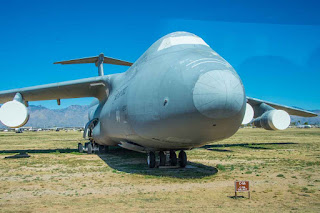 Many of the aircraft have signs telling what they are.  I truly hope I get the names right, but apologize in advance for any I get wrong.  There were SO MANY!!  Here's my favorite ... B52G and the later B52H. 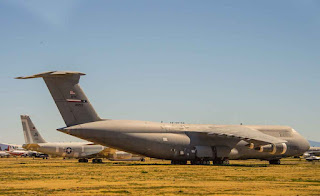 These aircraft are so massive you almost can't get a picture from the front and still see it!!  As a kid, I lived just outside Castle Air Force Base in California.  We saw these babies flying every day.  They always looked like they were going 10 mph, ready to fall out of the sky.  On Open House days, we went to see them take off ... almost running out of runway before they lifted up. 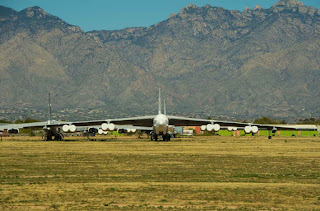 There are of course a few I didn't get names for, this being one.  It is HUGE and I think he said it spent a lot of time in Alaska.  We weren't allowed to get off the bus, so window picture taking it was!! 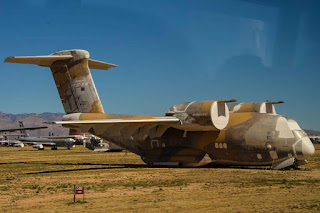 Mile after mile of airplanes are kept here, with the man in charge knowing exactly what they are and the location of every single one.  He even authorizes taking parts off some to keep others in the air.  It's much cheaper than manufacturing parts for those still flying.  All these planes are kept until the newest approved version is in the air. 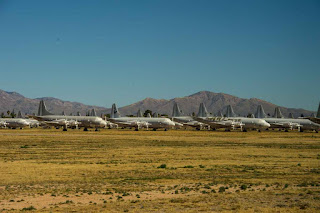 You've got to love all the artwork painted on the sides.  This one carried lots of electronic equipment to see what's happening in the sky and on the ground. 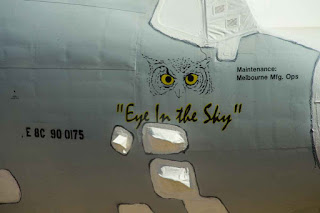 Through the reflection of the glass on the opposite side resides the F-11 7 Nighthawk Stealth Fighter, which you can't see, because it's ..... well ..... stealthy!! 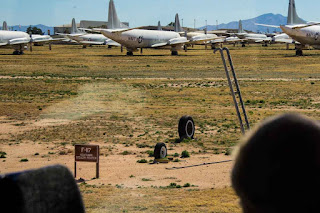 While we were driving along, a Fairchild A10, the defender of choice, flew over the base.  It's interesting to note that these planes are VERY quiet.  They take off around here constantly, but you usually can't hear them.  They can carry six 500 lb bombs and have a gatling gun that shoots an entire crate of 30mm ammo every second.  In case you were wondering why they always take off in pairs, it's because the student pilot flies the first plane while the instructor flies behind him in the second plane, giving him maneuvers to accomplish and instruction on HOW to accomplish them. 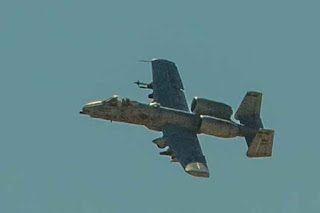 Back on the ground, we walked through three of five buildings, not counting all the planes they have on the grounds outside that you can tour.  Wear your tennis shoes ... it's a lot of walking.  Here's one of the Air Force Thunderbirds, with a Blue Angels jet outside. 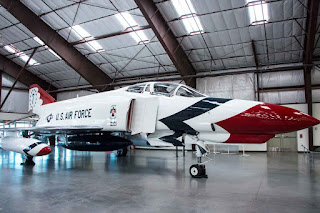 There's just so many to see and I took way too many pictures.  Here's one of the seaplanes, so you KNOW how big these buildings are. 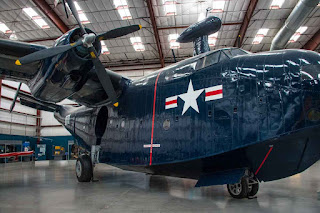 This is the jet that flew in the Tom Cruise movie ... woohoo Tom!!! 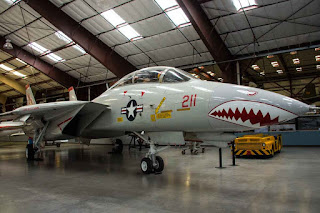 and the Lockheed SR-71A Blackbird ... fastest bird in history.  It goes from California to Washington DC in about an hour!!  Super sleek and beautiful!! 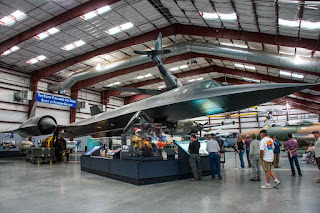 There's SO much more to see, but I'm breaking it up into two days.  This one shocked me!!  The word Merced caught my eye first, since I've lived just outside there for 60 some years.  Then I recognized the picture of the Old Courthouse that I helped renovate.  OMG!!!  These are all pieces of aircraft that were painted by the crew, this one being from a B52G Bomber.  Although the plane is now gone, they have saved the artwork.  How cool is THAT!!!!! 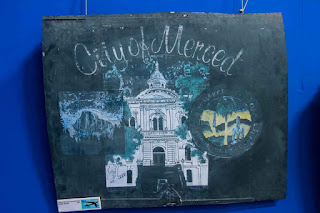 Here's a Lockheed S-3B Viking, a torpedo bomber in Squadron 21. 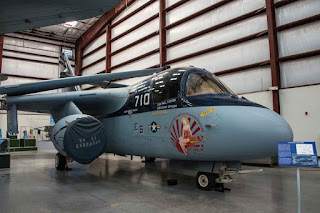 Here's the amazing artwork from THAT plane!!  It's even prettier in person.  Even if you think touring an aircraft museum is not your thing, definitely stop in here and check it out.  There are docents everywhere willing to answer any questions and give you personalized tours with stories about every single plane, many they have even flown. 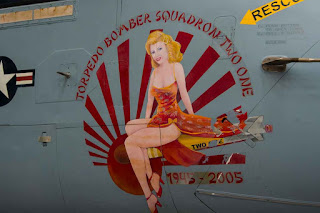