Bring On The Wind!!

Yesterday was kind of different ... up early with no place to go.  That was the plan however, as I dumped my tanks and began putting things away for my move this morning.  I'm going East, or is it South ... whichever direction it is, to Benson.  I seem to get turned around easily in Tucson since they put the mountains on the wrong side.  I've always traveled North and South between two mountain ranges.  Here, you travel East and West between two mountain ranges.

At any rate, tired of my cooking I made a quick trip to Frys for some sushi.  They make the best crab rolls and even give away slices in the store.  If you act like you are shopping and go around the store a couple of times, you can get a free lunch!  I bought this one and brought it home however.  Not exactly cheap at $9.00, but delicious!! 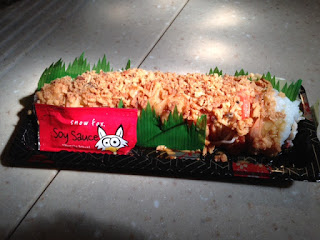 On the way back, I stopped in at Walmart for some water and picked up several balls of yarn so I could try out a new pattern I found.  It's supposed to be the color of the Indian clay pots I've been collecting.  With a project like this, I don't spend near as much money in gift shops and I don't eat as much, since crocheting requires a little concentration ... and lots of puppy patience, as they are always getting tangled up in the stuff. 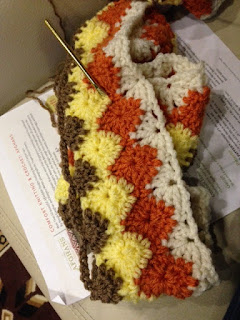 It was a beautiful day, so as I was cleaning the rig, I had the door open with my fan on.  Bad idea!  Suddenly a huge gust of wind came through, picking up several pounds of dirt from the road construction work at the entrance to the parking area and throwing it right through my door.  Even the puppies were coughing!!  So much for a clean rig!! 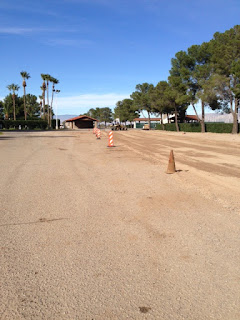 About 4:00 I ventured out to visit one more home for sale.  I picked up this one on the MLS site, where it had pictures and everything!!  This is what I found upon arrival however .... nothing ... nada!  That house in the back is NOT the one for sale.  Next to the real estate sign was a box with flyers.  In big letters it said TO BE BUILT.  Really?  Then how did all those pictures of the inside of the house show up on the MLS site??  This MIGHT be a possibility however ... it's got paved roads and will be a solar house, costing half as much as mine!! 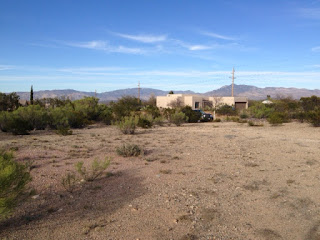 On the way home, I stopped in at the Chance residence for a quick dinner of soup and salad, but as soon as I got in the door, I heard those two words I can't refuse .... MEXICAN FOOD???  Uh, YEAH!!!  So off we went to our favorite restaurant for the Deluxe Burrito!!

To make it even better, Miss Patty knows how bad my cooking is, so she always stocks up my freezer when I'm leaving.  I came home with four bags of home cooked black beans and an entire deboned chicken I can use to make tacos and whatever.  You can't have a better girlfriend than that!!!

This morning, just because I'm moving, the winds have kicked up to over 20 mph.  I'm not in a hurry to get out of here, but as the morning goes on, the winds are supposed to get worse.  Not that I'm driving far, it's only 29 miles, but wish me luck anyway!!  See you in Benson!!