These Boots Are Made For Walking!!

Have you seen this before??  Maybe looks like the Earp Brothers at the "Corral"???  I happen to be very familiar with these guys, as they make some of the fanciest boots in the West.  Actually I was looking for T-shirts .... really, I was!!  It's hot here during the day and all I brought was long sleeve shirts.  "You aren't from around here, are you?  It's WINTER you know!"  Okay then, I guess I'll just have to look at the boots!! 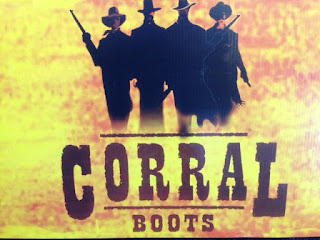 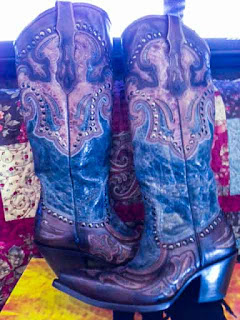 Back at the rig still scrounging for T-shirts, I checked out the SKP Co-Op park.  Unlike many Escapees parks in California, this one in Benson draws people from all over the United States .... Wisconsin, Michigan, Texas ... I see lots of different license plates, as well as many from Canada.  This isn't a laid back group at all .... they are going and doing continuously!!  Their schedule of every day events fills an entire page, not to mention the special dinners and entertainment they provide.

So when Lynn and Dave Cross suggested I purchase a ticket for the Fish Fry dinner, I was right on board.  Almost everything around here is done by volunteers, including the dinners.  I have to say it was DELICIOUS!!  Sorry I forgot to take a picture, so I did the next best thing ... I took a picture of the cook!! 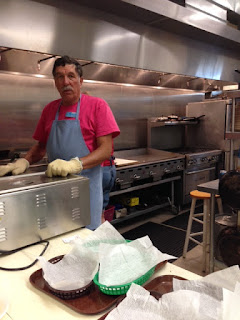 Here's the great way this SKP park works ... probably 90% of the work is done by those same volunteers.  They do an amazing job of landscaping the entire park and are presently installing a beautiful water fountain up by the clubhouse.  They recycle, have yard sales and all kind of money making propositions, which they then use to maintain the park, keeping their maintenance fees very low.  Believe me, they do an amazing job!

Once dinner was over, Lynn escorted me around to several of her friends places to see their casitas.  Most every site has one, but they are all totally different, even though all are only 288 square feet.  The rows in this park are set on different levels up the mountainside, so everyone has a great view of the mountains at sunset.  This is actually the sunset in the EAST before the real sunset in the WEST. 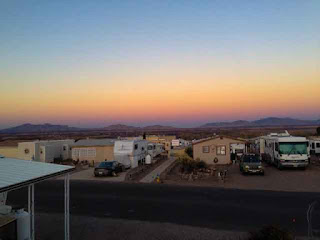 Yesterday, Kartchner Caverns was on my list, but when I checked in, I found you are not allowed anything but your car keys in your pocket.  No photography AT ALL, and they were booked, so I cruised on down to Sierra Vista.  Fort Huachuca Army Base lives there, along with a quilt shop I was interested in seeing.  When I arrived, there was still snow on the mountains.

I have to say this area doesn't suit me.  It gives me a feeling of isolation, of being WAY too close to the border as evidenced by the helicopter and six Border Patrol trucks hauling people off to jail, and I know you'll think this is weird, but there's no cactus.  That's right, just scrub trees.  No beautiful barrel cactus or saguaros or cholla.  If I'm going to live in the desert, I want to see cactus!!

I finally found the Squirrel's Nest ... not to say that quilters are squirrels ... but I could have nested here for quite a while.  This place has all MY kind of material, although a little pricey. 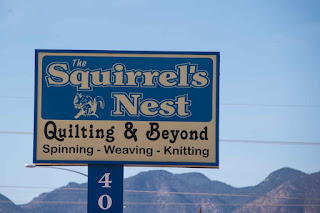 Wouldn't you know I forgot to bring the two pieces I already purchased for a quilt with an Australian feel, but that didn't keep me from snatching up these.  I know better ... don't buy without a pattern in mind, or at least know how much you need ... but this kind of thing isn't available where I come from.  I'll figure out something later!! 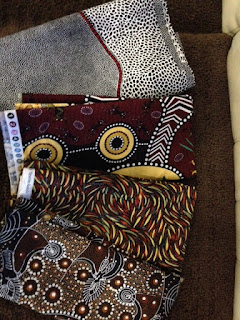 As I walked out the door, I felt someone looking down on me ... YIKES!!  The BIRDS!!!!  I thought it was a good time to get out of town, so I walked around the pole and jumped in my Jeep as quick as I could!!

I saw several subdivisions on my way to Sierra Vista, so thought I would check them out on my way home.  They all had huge rocks along the driveway.  I've no idea what it is, maybe someone can help me out here. 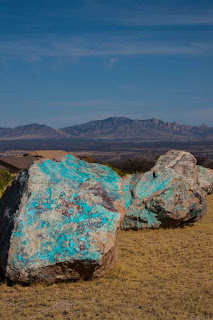 The views of the valley below were pretty spectacular, but the houses ... well they were just plain old houses, all too close together for my taste.  It looked like sales weren't doing very well.  These subdivisions were huge, with less than a quarter of it having houses actually built.  One beautifully gated facility had no houses at all.  Makes me wonder if they went bankrupt.  There are definitely some amazing sites however.  But see??  No cactus!! 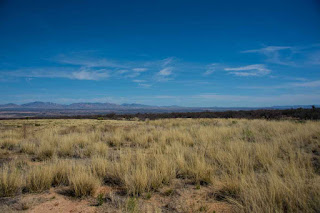 It's the elevation I'm sure.  I would be giving up cactus for cooler weather.  Definitely beautiful, but too isolated for a single gal.  It's a 40 minute drive to anything!!! 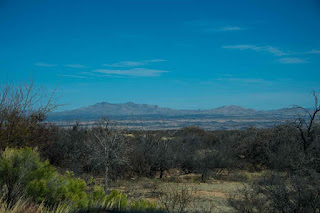 Today is relaxing laundry day as I gear up for next week.  I found the Rex Allen Museum in Willcox Arizona (one of my cowboy heros in my MUCH younger days) and I haven't yet been to Bisbee.  It's going to be a busy week!!