One of the main reasons I come this far South in Arizona is to visit Tombstone.  It was one of the last wide open frontier boom towns, sitting on the mesa above the Tough Nut Mine.  In less than seven years, it had a bowling alley, 4 churches, an ice house, two banks, three newspapers and an ice cream parlor alongside 110 saloons, 14 gambling halls and brothels, too numerous to count.

Before I drove the 22 miles however, I had to patiently wait for a parking spot at the SKP Saguaro Co-Op park in Benson.  First time visitors get to take advantage of a coupon, allowing one weeks stay for $50.  Otherwise, it runs about $20 a night.  There was an unexpected knock on my door around 9:00 ... Lynn had come to say the propane dispensary was open at a great price of $1.80 a gallon.  Right behind her was the parking crew with my notice that a spot was available!!

YAY!!!  After getting propane, I backed up the hill 80 feet or so and right onto the concrete pad.   I found out later, the owners of this site are off vacationing, so it's put in the rental pool for visitors. 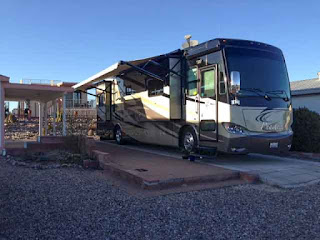 As soon as the rig and puppies were set up, I was off to Tombstone!  Next to Disneyland, this is one of my all time favorites.  I think it has something to do with cowboys!!  First stop ... the Courthouse!!  For $5.00 you can walk around the entire building, checking out the Sheriff's Office and Jail addition, as well as where all the taxes were collected.  It never did say what they DID with the tax money .... 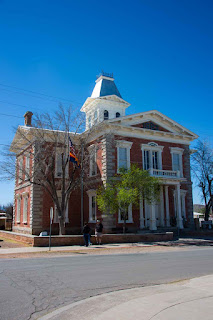 Upstairs is the Courtroom where the bad guys were sentenced to hard time.  Most were moved to the Yuma Prison, but those with only a few months time were kept downstairs. 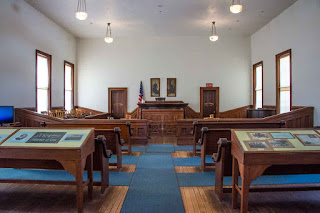 There was one gang of men however that looked out this window at the gallows where they would end their lives in 1884 when Sheriff Jerome Ward carried out his duty.  Five members of the Heith gang ended their lives here.  The sixth, Heith himself, was broken out of jail by a vigilante group and hung from an electrical pole.  The townspeople thought he should share the fate of his gang. 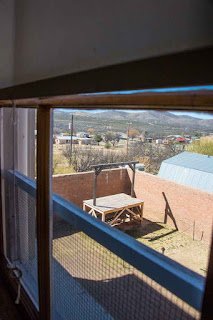 There's lots to see here, including this invitation to the hanging of the Halderman brothers in early 1900. 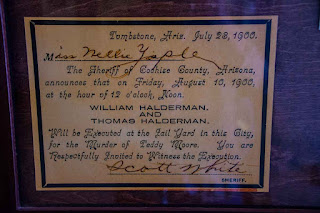 The original gallows were burned down many years ago, so this replica was built in the courtyard in the same location.  That doesn't look like fun to me!!! 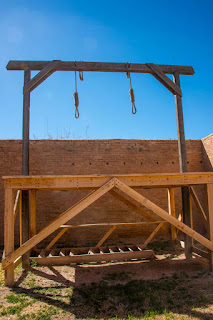 Among the exhibits inside is this gorgeous dress, worn by a school teacher.  I doubt this was everyday wear, but wow ... it's an amazing piece of handiwork.  More likely, the women wore something like the tan blouse. 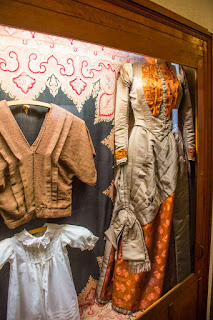 Ed Schieffelin is the founder of Tombstone.  He made his fortune in several silver mines, building the Schieffelin Opera House for ladies and gentlemen.  The Cowboys and riffraff  hung out at the Bird Cage Theatre. 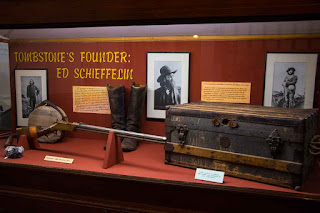 Here's an Assay Office setup, complete with furnace to melt and test the silver.  The ore was pulverized and burned in the furnace, resulting in a small button.  That was flattened and burned again to vaporize the lead.  The remaining piece was weighed and estimates made on the number of ounces per ton, hopefully making the miner really happy!! 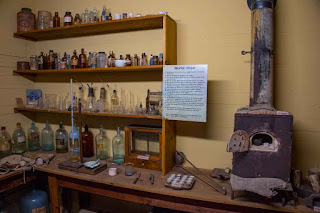 It was all about the mines in town and the money to be made.  Each of these certificates is from a different mining organization. 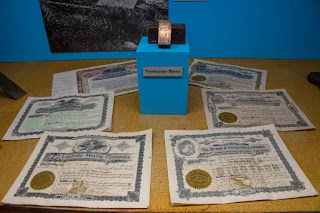 Tombstone didn't end up famous for it's mining however ... it had a lot to do with the gunfight at the OK Corral, as heralded by Hollywood.  The mining capitalists and townspeople were mostly Northerners.  The ranchers and criminal element, like the Clantons, were Confederate sympathizers, hiding out after the war and rustling cattle from the Mexican border 30 miles away, who came to be known as the Cowboys.  It was still the North against the South.

They spent a lot of time in this saloon owned by Big Nose Kate.  She was the girlfriend of Doc Holliday, who also spent a lot of time here.  What better place to take a break and have lunch!!  It's ALWAYS crowded, so my advice is to go early.  I was lucky to get a table on the little front stage where I sat taking pictures the entire time!! 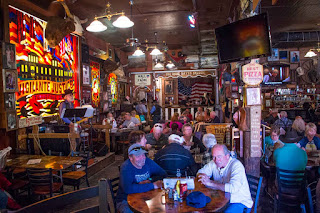 There is a little wait for food!  By the time my pastrami sandwich arrived, I was on a sugar high from the two glasses of pepsi I gulped down, making this image a little blurry!!  Boy was this sandwich GOOD!!! 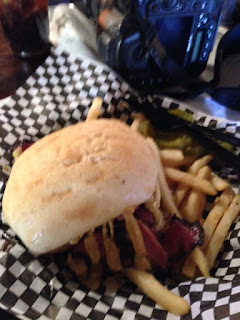 At the end of 1879, the Earp Brothers, Wyatt, Morgan, Virgil and Warren, came to town and clashed with the Cowboys.  It finally erupted into the gunfight you've all heard about, but it didn't happen on this street, or in the OK Corral!!  So all these year's we've been told a big fat story!!! 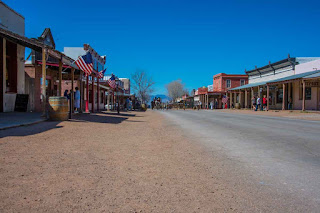 The actual gunfight occurred a block or two away on Fremont Street.  Several times a day however, the fight is reenacted by good guys and bad inside the OK Corral where you can't see unless you buy a ticket!! 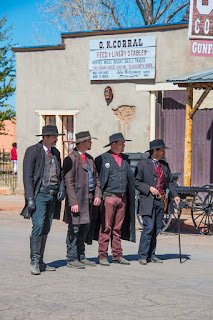 If you want a little tour of town, you can take one of MANY stagecoach rides.  This would be my choice with the most authentic coach.  The drivers talk the entire time, giving you lots of tidbits of history about what happened where. 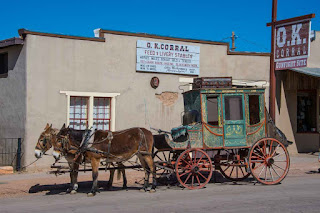 I of course, was only interested in the mules!!  I did check out many of the shops and stores where you can purchase really nice Bailey and Stetson hats, along with vintage looking clothing, but came home with absolutely nothing but pictures. 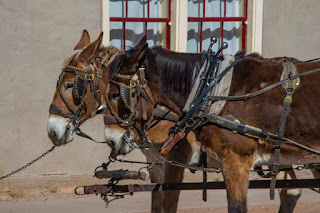 The one tour I really wanted to take was inside the Birdcage Theatre.  That is one place I highly recommend you tour for $10 each.  It's self guided and you can stay as long as you want.  It's still mostly intact and an amazing glimpse into years past you don't want to miss.  Original posters still hang on the walls and the original piano is still there, as are the girls cribs and the poker tables that kept busy for eight straight years.  Definitely a MUST SEE!!!