While Patty and Dan took off for appointments, I messed around yesterday morning with the puppies until I got my act together.  I was off again to look at property in the area and up towards the mountains.  One thing I realized immediately is the traffic in and around Tucson.  If you're driving the speed limit, they like to ride your butt until you pull over so they can speed!!  I spent a lot of time pulled over!!  I don't drive slow, but I don't like tickets!!

With nothing on the horizon, I stopped in at the fairgrounds to check on available spots.  I think the Gem and Mineral Show, now in high gear, is the reason for only 4-5 empty spaces out of 80+.  All of the 50 amp hookups were taken unless you wanted to park out front with no sewer.

It was my lucky day however!  Just as I pulled in, two rigs pulled out of the 50 amp section.  I flagged down the Camp Host and asked if I could reserve one.  When he said "sure", I ran back to the office and paid $118 for the week.  As I left, two MORE rigs pulled in, so I figured I better get moved.

I would have loved to stay longer at the Last Chance Ranch, but even though that RV park is the best in the country, it doesn't have a sewer connection.  The Ranch is just five miles down the road, so I'll still visit until I head further south.

I left my Jeep and drove up just in time for the Camp Host to help me park.  As I set up, I heard a knock on the door.  My neighbor Pam came by to say she just loved seeing single women at RV parks.  How cool was that??  I think we would have become friends, but she's leaving today.

She did mention to be sure and bring my water hose in at night.  With the temperatures so low, half the park forgot and their pipes froze up.  My neighbor in a fifth wheel was replacing his lines!!  This morning it's only 32 degrees with a nice strong breeze, but I'm sheltered on each side with rigs and by trees in the back.

Patty drove my car over later, and we returned to Algodones #2 (the Ranch), as we tried to duplicate the shrimp tacos.  Using a very small saucepan in order to use MUCH less oil, we lightly floured the shrimp, dipped them in batter and then the hot oil. 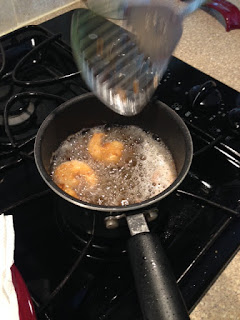 There were a few spatters here and there, but the end result was delicious tempura-like shrimp that made WONDERFUL tacos!!  Yes, it took a lot of time, lots of paper towels and a lot of effort, but they were worth it!! 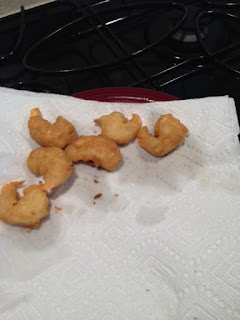 What the heck?  It's worked fine for the last week!!  At 10:00 I was outside with a flashlight, looking in the bay for the bag it came in, which held the second controller.  As it happens, the directions were there too.  It said plug in the blanket, then plug in the plug, which I had already tried.  Thank goodness the second controller worked.  Maybe I should have unplugged it before disconnecting the coach electrical?  I finally got to sleep about 11:30.   Of course that didn't have anything to do with my "wake up" time.

As I type however, I've been listening to a Hooty Owl in the trees ... I may try and see if he will say "cheese".  Today holds a quick run to the grocery store for Super Bowl snacks and dog food, as well as a long puppy walk.   I wonder what other trouble I can get into??