More of the wild blue yonder jets and bombers from our tour of Pima Air and Space Museum.  This is the North American F86E Sabre, the first swept wing jet flown in 1947 and the first to exceed Mach I.  Known as Joyous Joyce, she was flown extensively in Korea. 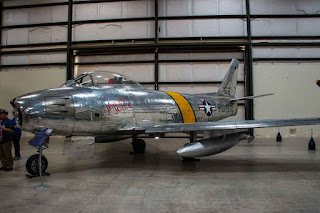 The F86 Sabre fought against this Russian made MIG 15.  The Russians were allowed license to build this jet from the British Government.  Surprise!!!  Although unexpected, this jet could never outfly the Sabre. 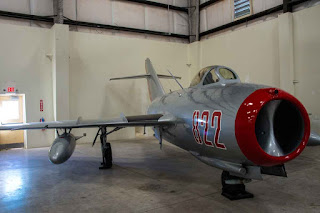 The stories told here by the Docents, mostly retired military personnel, are amazing to hear.  The pilots of many of these planes still tell their tales today.  Many of my high school friends were lost to the Vietnam war, so I appreciate the words from those who survived. 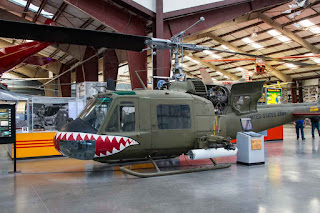 This is a closeup of the front of the A-10's you see flying around Tucson.  The front wheel assembly is offset to allow for the length of the gatling gun. 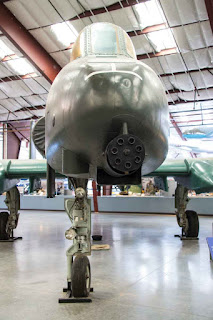 This is Sentimental Journey ... Betty for short (Betty Grabel that is)!  To read her story, click here.  This beauty flew in the Pacific theatre in 1944 before becoming the first ever to control drone planes for nuclear testing. 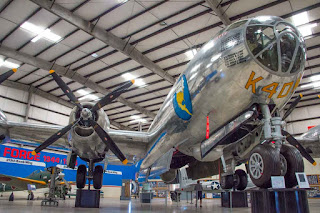 Finally sold for civilian duty with the expectation of maybe 100 more flights, she flew over 1000 fire-fighting missions.  Here's an up close and personal look at her bomb bays.  Finally, in 1978 she was brought back to Arizona to spend her retirement years. 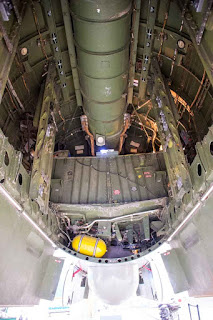 All the planes in this 390th Memorial Building were flown in World War II, including I'll Be Around, another B17 bomber.  This baby bombed the coast of Normandy, cut German supply lines, dropped food supplies to civilians and brought prisoners of war back to England where she was stationed from 1944-45. 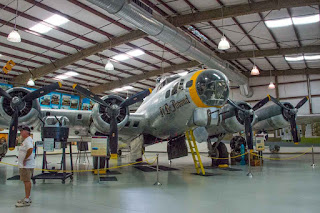 She still has a couple of dummy bombs in her belly, just so you can see how they were carried.  They have done an amazing restoration job on all of the planes here. 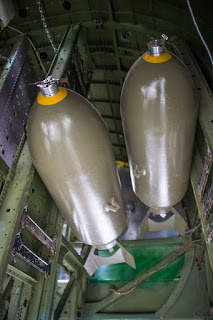 She was eventually transferred to the U.S. Coast Guard, before becoming a firefighter until her retirement in 1980 here at the museum. 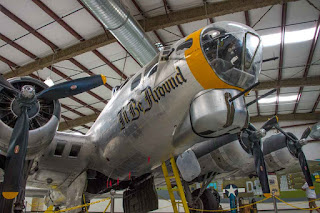 This C46 D Syracuse Shackrat was adopted by the U.S. Army in 1942 to haul supplies to China and India, and continued to fly in the Vietnam war in 1962. 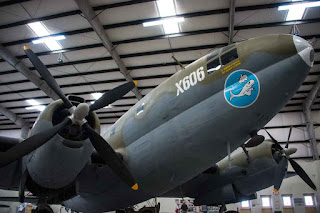 All along the outer walls of the memorial building are jackets worn by the pilots and crew of these amazing airplanes.  The lights and reflections make it difficult to photograph, so I recommend you go see them in person. 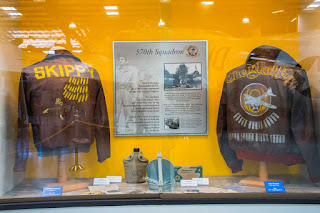 One entire wall shows pictures of the artwork on all those planes.  Most planes were personalized by the crew with girlfriends, sisters and dream girls on their sides.  Each picture shows the number of missions and whether the plane and crew survived the war. 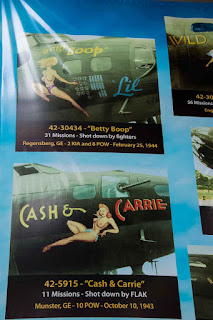 Now I'm not exactly a superstitious person, but I have had my share of ghostly encounters.  When I downloaded this image to my computer, I was shocked to see a human face on the right hand side of the gun turret where a dummy is laying flat on his back with his feet in the air.  I doubt this will be visible on the blog, but believe me, there's a good looking dark haired guy with a mustache peering out at me.  Very spooky!!! 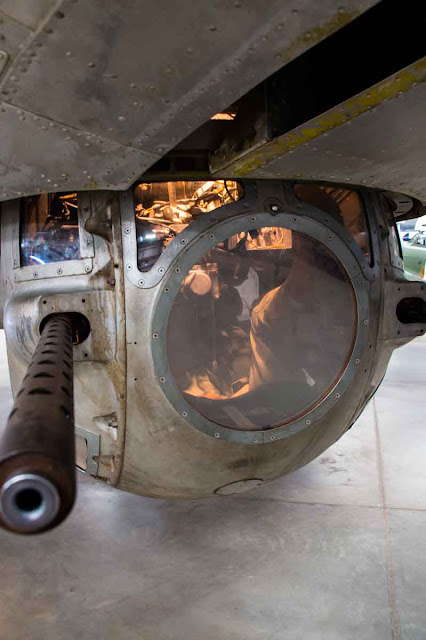 There's much more to see here ... we never did make it to the space part of the museum, nor did we walk around all the planes that are OUTSIDE the buildings.  This is one museum that requires TWO days to see it all.  Even if you aren't into military planes, I guarantee you will be amazed at the stories contained in these buildings.