There's always times in life when you have to eat your words.  It's not the least bit tasty, but yesterday I had to choke down all the bad things I've said about LaMesa RV.   Of course the EXACT store does make a huge difference.  I've bad-mouthed Yuma LaMesa something terrible ... well deserved I might add ... and even the Sacramento location is iffy ... but I have to give it up big time to La Mesa TUCSON!! 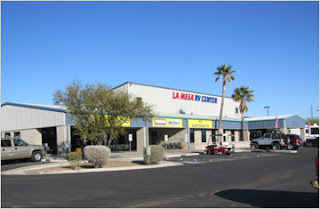 As you know, the weather here has gone from 25 degrees at night with daytime temps in the 50's, to a record breaking 86 when the usual for this time of year is 68.  My electric blanket went bye-bye and I turned the AC on for the puppies.  Funny thing though, the air coming out appeared to be 82 HOT degrees.  That's not good .... not good AT ALL!!

So you already know what I did .... I called Dan, which I'm beginning to feel badly about.  I'm sure he's going to get caller I.D. real soon!!  At any rate, he works part time at La Mesa transporting rigs not only around the area, but across the U.S. as well.  I'm hoping he has some pull to get me in, because this is their busiest time of the year.

Even though they are booked three weeks out, in two short days, I had an appointment with Dave Adams, Service Advisor.  There was no promise of a fix, just a diagnosis.  I was good with that!!  So yesterday I took my rig in, where I met some of the nicest smiling people.  That's a change of pace!  With a note pinned to the bird cage to not touch or risk the loss of a finger (yes, he really can bite your finger OFF), the puppies and I headed to the patio to await our fate. 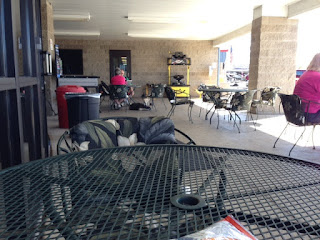 A little nervous, both puppies wanted in my lap, but there just wasn't enough room.  Jessie got her own chair pulled up next to mine, while I tried to sit on one cheek to give Cooper room.  Surprise!!  Both puppies were very well behaved, even though there were two other dogs just feet away.  We sat there for an hour while I tried to figure out how to get in for the free lunch, where dogs were not allowed. 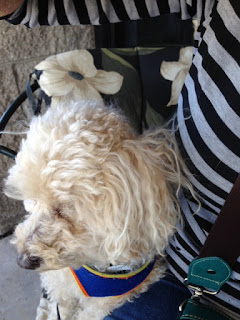 I finally walked up to the receptionist who gave me a lunch ticket.  When I explained I was alone and had two dogs, she went inside and asked the girl at the grill to come out and take my order.  Talk about service ..... ten minutes later she delivered my hamburger with all the fixings, a bag of chips and a tall pepsi.  All with a big smile!!

WOW .... this place is amazing!!  Another hour went by and Dave walked up to say the AC unit was toast!!  They ordered another one which will be here within four days.  Just make an appointment now for next week.

When I got to the cashier's office, she apologized there were no openings, but Dave stepped up and said he would get me in next Thursday.  I didn't even have to pay one red cent until the repair was complete.  I put the puppies in the rig and we were off!! 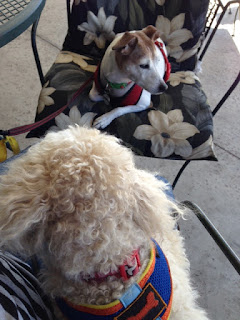 I know all service facilities are not equal and I owe a LOT to Dan Chance for getting my foot in the door, but this facility has seriously outdistanced any other LaMesa RV I've been to.  So if you are ever in Tucson and need repairs, be sure and ask for Dave Adams.  I sincerely think you will get the same good service I did.  Boy do those words taste bad!!!