The Wildest, Wickedest Place In The West!!

Who wouldn't want to check out the place touted as the wildest, wickedest place in the West?  That's why this particular theatre became so VERY popular in the late 1800's.  Opened in 1881, it was originally intended to be a respectable place like the Hutchisons had seen in San Francisco.  They even had Ladies Night, but that didn't seem to bring in the expected riches, so they cancelled Ladies Night and brought in bawdier entertainment for the rich miners. 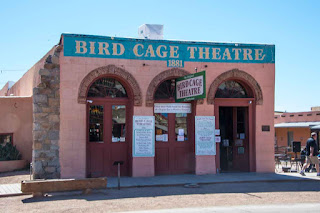 Just inside the door was the bar, not nearly as large as I expected.  In the bar mirror, you can see a large original oil painting of Fatima the exotic dancer, which hangs on the opposite wall.   It has six bullet holes in it.  In fact, bullet holes are all around you ... in the bar, in the ceiling and in the pictures.  I think they said something like 26 men were killed here.  Not a good place to get into an argument!! 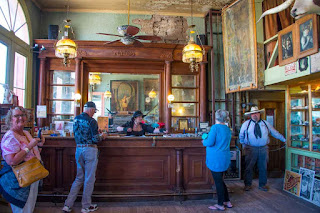 Up the right hand side are the steps used to get to the balcony above the bar and to the cages (or cribs) hung all along the upper walls on both side.  Fourteen I think they said.  It wasn't cheap to drink and play here .... beer was 50 cents on the floor, but $1.00 in the cribs, which were rented for $25 a night!!  The stairs leading up are badly worn, in spite of the cost. 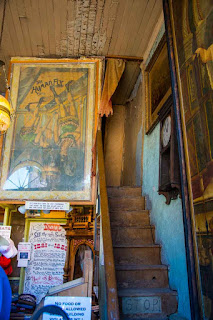 Looking at the stage, you can see the cribs on each side up top.  I'm not showing you any pictures you can't see on the internet, but I am holding back quite a few.  THIS building is really worth the $10 cost to visit!!  The walls are lined with memorabilia, from playbills to pictures to antiques. 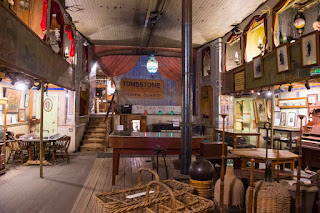 The cribs have original artwork on the front showing acrobats swinging from the ceilings.  Those acts were discontinued when the Human Fly gal fell one day and broke her neck.  These are tiny, tiny rooms with barely enough space for a cot.  The drapes were pulled when the girls entertained their customers ....... or not! 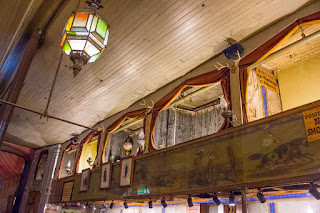 The stage isn't near as large as I imagined and the original curtain still hangs there.  Gas lights illuminated the likes of Lillian Russell (21 when she sang here), comic singer Irene Baker, opera star Carrie Delmar and others like comedians David Waters and Will Curlew who put on bawdy shows.  The grand piano made of rosewood was shipped around the horn and placed here in 1881.  It hasn't been moved since. 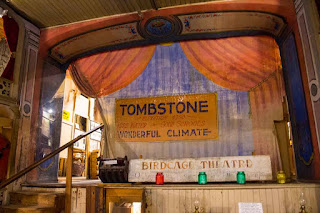 The view from the stage looking out into the audience shows just how small this place really is.  It ran 24 hours a day, 365 days a year for 11 years.  The Grand Central Mine hit water and eventually closed, unable to reach the ore below.  That began the downfall of Tombstone, which closed this theatre in 1892. 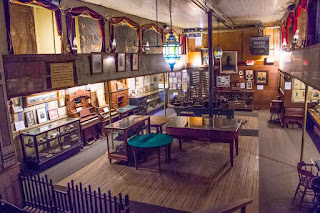 Recently they have opened the basement, showing the small bar and poker tables where the games were kept going for 8 years straight.  Wyatt Earp, Bat Masterson and Doc Holliday spent a lot of time in this basement. 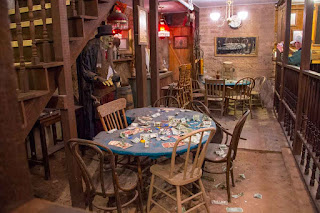 For the "special girls" there were two cribs down below, one belonging to Sarah Josephine Marcus,  Sadie Jo to her friends and customers, who was engaged to Sheriff Behan, who didn't like her occupation.  She later became acquainted with Wyatt Earp, who spent a LOT of time in this room.

They say Wyatt lived just a short 50 feet away with his common law wife Mattie, also a prostitute.  Mattie left with the Earps when Wyatt went into hiding after killing the Cowboys responsible for Morgan's death.  Eventually he ended up in San Francisco with Sadie Jo, leaving Mattie to her own devices.   Mattie returned to prostitution, but between being addicted to Laudanum for headaches and lack of business, she eventually overdosed on Laudanum and alcohol. 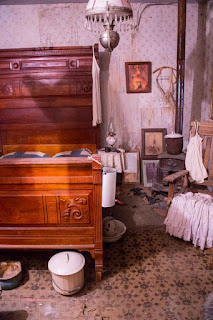 Who knows if all that is really true, but Sheriff Wyatt Earp did sign Sadie Jo's license to work in the cribs.  Everyone who wanted to be in business, had to have a City License to the tune of $7.50 or more, several of which hang in the Courthouse. If you want an amazing walk through 1880's history, definitely stop in and count the bullet holes.  Give yourself plenty of time though ... this is a museum of excellent caliber and amazing one-of-a-kind items.  You'll want to read all about it as you walk through history, just as it was left in 1892.