Sometimes you get both, even though that's NOT on your agenda.  Yesterday I wanted to go see the Indian pottery exhibit at the Arizona State Museum.   I've been looking forward to learning about all the different tribes, how they made their pottery and how it's changed over the years.

The first indication that this may not go well was my GPS.  I don't usually use it, but the museum is in downtown traffic-congested Tucson.  Trouble was, it couldn't find the address.  Uh oh!!  So I picked the one closest and figured I'd just wing it.  There has to be big signs, right?

Wrong!!  After the first trip around the four block area with not a parking spot in sight, I finally saw a tiny sign to turn right, which took me directly into a parking garage.  I grabbed a ticket and drove around ..... and around .... and finally decided to exit, since there were no spaces available.  Just as I was heading out the gate, I saw a sign that said "Pay Cashier First".  But wait ... I didn't park!!  Ok, where's the cashier?

Another drive around the garage landed me in hot water when I turned the wrong way and almost hit a car head on.   I finally found the cashier and a 10 minute parking spot so I could pay, or at least find out how to escape this maze.  It's a good thing I didn't drive around for more than 14 minutes.  My parking was free.  With the now-stamped ticket, I was able to exit the gate on the wrong street, going the wrong way.  YIKES!!!

I give up!!  I hit the GPS for home where I arrived two hours after starting out.  Strike one for Nancy!!  Undaunted, I returned to the Mission San Xavier Del Bac to take advantage of the nice cloud cover and have an Indian Taco for lunch.  That's a large paper plate under the fry bread, covered with red chili, homemade pinto beans and regular taco stuff.  For $7, you can feed a family of four!!  It was delicious, but I could only eat about a quarter of it. 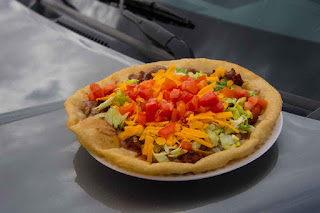 It was really crowded on this day, so I didn't go inside, just took a few photos with the clouds. 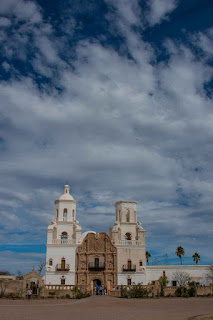 Then I walked up Martinez Hill to the East, named for Jose Maria Martinez, Lt. Colonel at the Presidio in Tubac.  After Apache Indian attacks, he was granted land here by the Indian Chief. 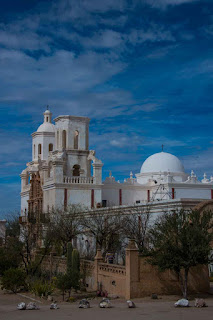 Just as I rounded the first corner, a roadrunner ran across my path.  I think that must mean good luck, because the entire time I was on the hill, there were no humans around.   I was unable to find out who is buried here.  It could be Mr. Martinez, killed in an Apache raid in 1889, or one of the Franciscan Monks who restored the mission. 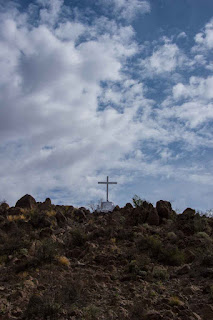 Around the first corner is a huge grotto with a statue of Mary high up in the side wall.  Erected by the Bishop of Tucson in 1908 on the fiftieth anniversary of the apparition of Mary at the Grotto of Lourdes, it's an amazing spot to sit and view the surrounding Indian lands. 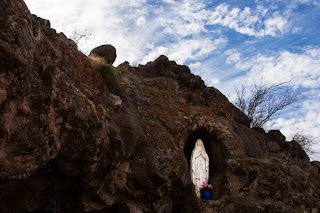 The path continues around the entire mountain, with many benches to sit on, giving you great views of the farmland.  This was certainly a WIN for today!! 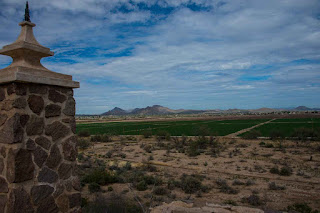 Just about sundown, I drove across the fairgrounds where I climbed up to the top of the grandstands for some nice sunset shots.  Luckily I turned around just in time to catch these beautiful pink clouds surrounding the moon. 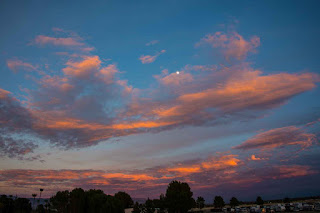 It's not quite full, but beautiful none the less.  I would have a better shot, but realized all my big lenses (and battery chargers) are over at the Chance Ranch, where I left them for safe keeping. 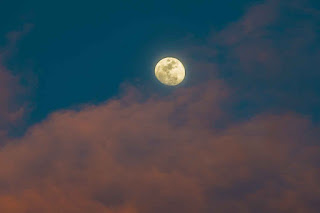 When I turned back around, I was greeted by this gorgeous sunset.  I just can't get enough of these Arizona evenings!! 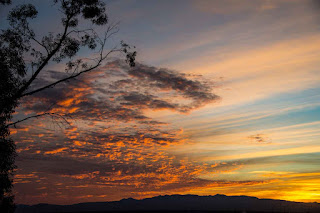 That was TWO WINS versus one loss, so I'm ahead of the game. 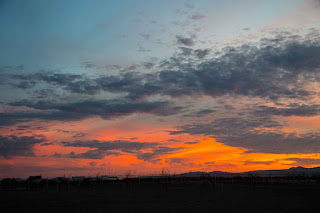 Even better, while I was on the grandstands, I located the arena where the horse jumping competition will be held this weekend.  AND the drag races are back on today.  I'm going to be a busy girl!!