You KNOW any museum with the name horse in it is going to be on my list of places to go.  At 11:00 on the dot yesterday, I was standing at the door waiting for them to open.  It being mid week and not another soul in sight, I got a personal tour by the Owner/Director.

He's been procuring items for museums for over 20 years.   Once an instructor at the University of Arizona, his passion has become Horse Soldiers, who came from all over the world to fight in the various wars here and overseas. 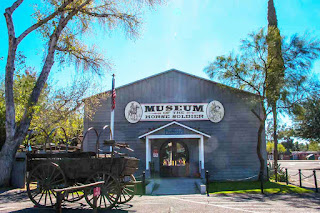 I'd really just like to have one of his horses in my front yard.  It's hard to come by old horse equipment.  Most of it didn't last long and was discarded at the dump.  Even with great care, leather products don't last as long as cotton or wool material.  This museum however, has LOTS of great items!!  These training saddles were used by the troops in the pictures as they learned to ride and fight. 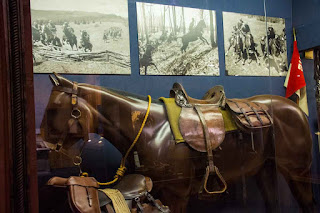 There's a uniform for just about every year of saddle built.  This is a Scouts dress uniform, as evidenced by the red and white cording.  It's hard to believe that out on the prairie or at the desert fort, men would actually get dressed up in this regalia, let alone try to ride a horse in it. 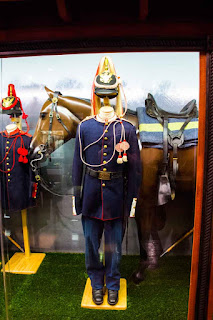 Not the greatest of pictures ... you can take all the photographs you want, but the lighting and reflection on the windows pretty much distorts the image.  This is the helmet that goes with the above uniform.  The insignia on the front denotes his occupation and status.  The crossed arrows mean he's a Scout, as well as the red and white horsetail on his head. 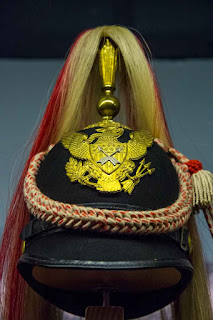 THIS is the most amazing piece of leather ever!!  You are looking at one of only THREE 1844 Ringgold saddles left in the world.  He purchased this one from a 96 year old collector who had no family, and sold off his collection to museums.  By the way, this is all purchased with private money. No government grants here!

Even more amazing, these saddles had pistol holsters mounted on each side in front.  THIS one is covered with it's original bear skin cover.   The roll on the back is his suitcase and his bedroll would lay across the holsters in front.  For each saddle, he has a bridle from the corresponding year.  There's one more like this in Kansas and one in the Smithsonian.  As a horse rider, I can tell you this would have been a VERY comfortable saddle to ride!! 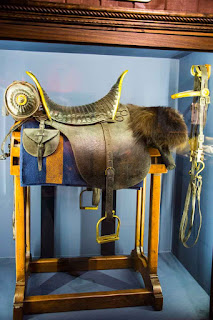 This is an 1874 McCelland saddle, not quite as comfortable.  These were only made in certain years, and he has one of each.  There's also lots of boots worn by the soldiers, and a great example of the Riderless Horse with boots turned backwards in the stirrups, a sign of the Officers last look back at his troops. 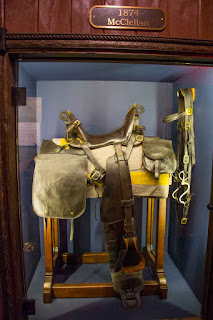 Hanging off the saddle would be all of this gear ... your sword, a knife, a pair of guns, bullets and your gloves. 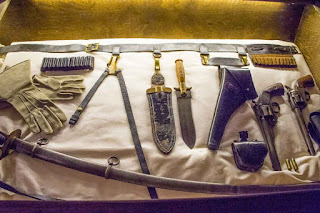 Many of the items dug up at the old Forts include bridle parts and pieces, including these conchos and buckles.  Sometimes when the leather breaks, it can be repaired.  Mostly it was just thrown away and a new bridle secured. 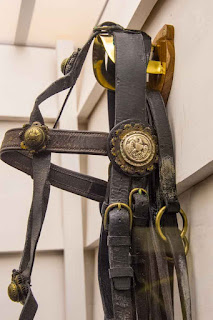 If you've got that many horses, you have to have a Veterinarian and a Horseshoer.  Although these bottles say Veterinarian on them, I would imagine these were also used by the men for fever, strains and coughs. 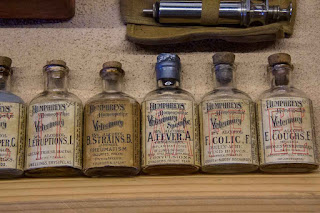 In World War I, the Mules from Mars were used extensively to move supplies.  Mars is an acronym for Merrills Mules And Replacements.  Although only open three years now, there's lots of information and interesting stories about Horse Soldiers in this museum. 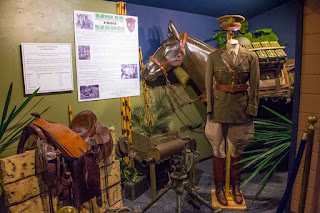 This is Frank.  He was a war horse at Gettysburg and having survived 13 battles along with his rider, Bugler Isaac Swartout, watched the surrender of General Lee. 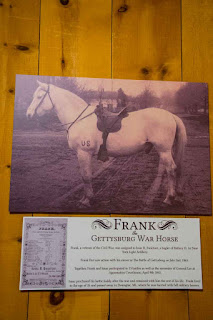 You've probably all heard about Sgt. Reckless, the pride of the Marines.  She was purchased from a young Korean boy and courageously carried men and supplies during the war.  Wounded many times, she just kept going.  Men even covered her with their flack jackets, risking their lives, since she had saved theirs so many times. 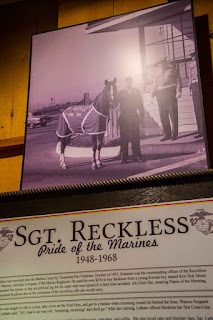 All around the museum are collections of items found at many of the forts in Arizona, including Fort Huachuca. 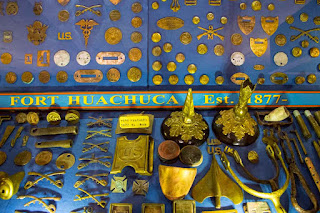 Here was an interesting piece ... Rose Vegetable Tooth Paste from Jules Rauel Perfumer, for the protection of teeth and gums.  Too cool!! 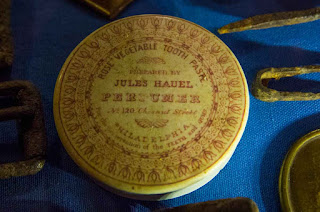 In the Civil War, many kids joined up along with their fathers.  Anyone 13 and under became drummers, not only drumming as they marched into battle, but passing messages along as they banged out a special code.  This particular drum was carried by a 9 year old!! I stopped here because I'm a horsewoman and this is my thing.  I think I've spent more hours IN a saddle than out.  The saddles and bridles were amazing to see, and it was fun to spot the repairs.  Even if this isn't your thing, there is a lot of VERY interesting history here, including many personal stories of the men and horses who used this equipment.  For $8.00, it's well worth stopping in and even nicer to support a private enterprise.

The good news today is that my AC unit came in to LaMesa RV, meaning I have to button up the rig and get over there by 11:00.  It going to be a long day sitting on the patio with the puppies.

Posted by Nancy Kissack at 6:12 AM