Guess Where I Went!!!

You got it right .... here I am back at the LaMesa RV store in Tucson.  Although it took two phone calls, I found out Wednesday afternoon that my AC unit had arrived.  That Dave Adams is a really smart guy, having me make my appointment when it was ordered.  So yesterday morning, I zipped the rig up and headed off to the repair shop. 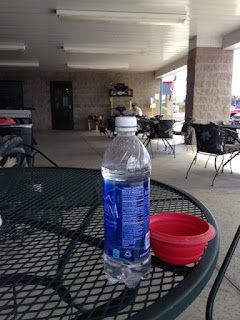 I'm so glad this business is dog friendly.  You can take your animals anywhere you want, except into the food preparation area.  When I reminded Dave about the bird biting, he wrote in BIG red letters ... BIRD BITES, so the guys wouldn't lose a finger, causing me even more delay!!

At least this time I remembered to take water for the puppies, and that expensive collapsible bowl I bought and never used, came in REAL handy.  I was pretty proud of Miss Jessie ... she only barked once at another dog and didn't bite any of the fingers of people who tried to pet her.  Good Dog!!!  Better yet, it was overcast and cloudy all day long, so not near as hot as expected. 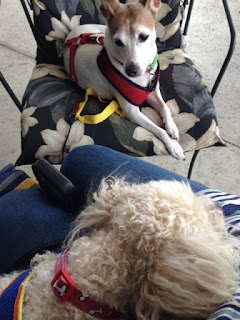 I met a couple who I'd seen there before, and we chatted for a few hours while their new-to-them rig was having the carpet cleaned due to some grease from fixing the slide that wouldn't go in.  Just kidding, they said they wanted LaMesa to make their first month's payment since they had been waiting for parts for about 10 days.  Well the Salesman jumped right on it and LaMesa paid HALF of their first payment.  Sometimes I think our smiling faces and good attitude get us more service than an angry, I'm-going-to-rip-you-apart face!!

My extended warranty paid $1500, and even though my deductible is $100, I only paid $50.  Heck, I ate that much in free food at lunch everyday day I was there!!  They were even nice enough to bring me my food again since I couldn't go inside with the puppies.

Out the door by 3:30, I drove back to the Fairgrounds.  Where I come from, when it's that cloudy, the sun is obscured and there's no sunset.  Not here!!  When I saw this, I ran outside for some more pictures. 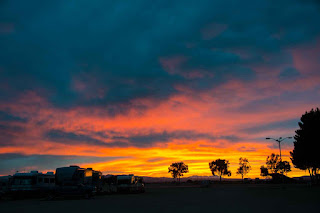 It was then that I heard the Hoo Hoo Hoooooo!!!  There's that owl I've been hearing in the trees.  As I looked up, sure enough there was one perched at the end of a big limb.  Then a SECOND Hoo!!!  It was so dark you could barely see them.   I quickly changed my camera settings and shot away. 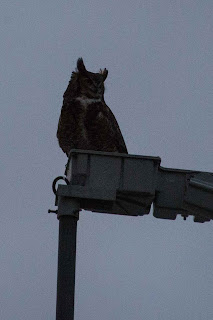 Here's what showed up when I processed them.  Two beautiful great horned owls .... TWO!!  One perched on this tree talking to the one perched on the light standard.  How cool was THAT!!!! 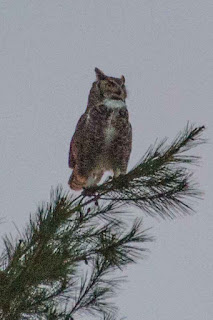 I'm so excited I can hardly stand it.  I snuck as close as I could without scaring them off.  I got pretty close since I was wearing my Indian moccasins!!  I was in stealth mode!!  Not that they cared, they were just looking for dinner.  This one spread his wings like he was going to fly off, but stayed on the light.  I probably took 100 photos.  Hey, it's digital!!  Still a little too far away and too dark to get their eyes, but at least you can see the feathers. 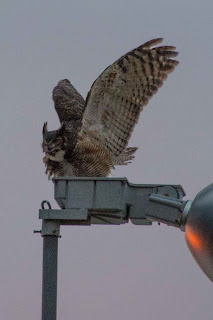 I really wanted to stay and watch them, but it was time to feed the puppies.  It's a hard job being on alert all day long, protecting Mom from those other killer dogs.  I found them both laid out on the couch asleep!!

I'm happy to say my AC works just fine, although the temperatures on the readout don't quite seem to match my handheld thermometer.  Who cares, as long as it works!!  All in all, I can't say enough good things about LaMesa RV.