One day, a very long time ago, the Army was sent on horseback to protect the farmers from the Indians close to the Mexican border.  When they set up camp, a couple of the guys discovered huge chunks of what they knew to be copper.  They quickly staked their claim, but had to travel to Tucson to record it.  Short of money, they sold their claim to some investors, who immediately began mining operations.

Thus Bisbee was born, being named after a California Judge, the biggest money man, who never set foot here.  Since all the "good" ground was saved for mining operations, the town found itself in the bottom of a very deep gully and up the side of steep cliffs. 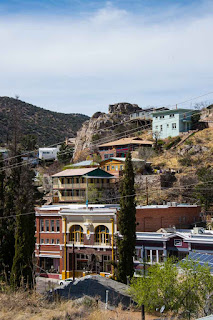 People flocked to this area, having been mostly brought by the mining companies, where no transportation existed.  These two trolleys were all that moved the masses. 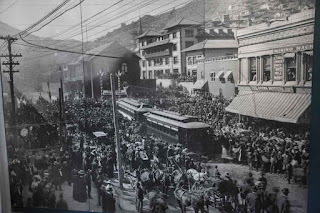 In Old Town Bisbee, some of the original buildings remain, with narrow streets barely wide enough for a wagon, let along two cars passing. 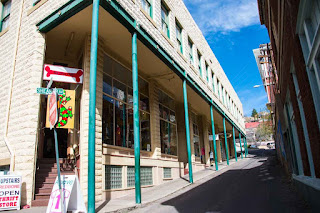 Since the Copper Queen Mine shut down in 1975, the population has dropped to practically nothing.  The downtown area has become an artsy community, followed closely by antique and thrift stores, all of which were closed. 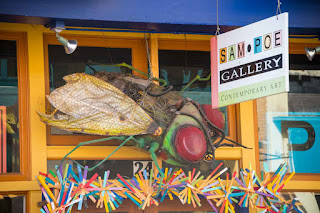 The Fair building, an original department store, even before Woolworth and Penney's, has recently become a museum, operated by the local Historical Society.  There's three stories of local history here and the docents are Bisbee residents.  They have lots of tales to tell if you have the time. 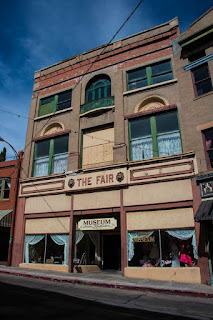 With most every house built of wood, it didn't take long for Bisbee to burn down.  Big money mines rebuilt with brick and concrete in the early 1900's, which is mostly what you see today. 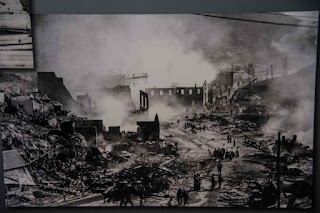 This huge building is the Copper Queen headquarters, with the mine being basically across the highway.  It's full of interesting information about mining, how it was done back in the old days and how it was accomplished until its closure.  The ladies I spoke to here have resided in Bisbee most of their lives, so they know their stuff. 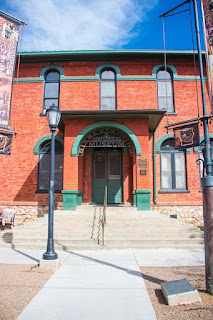 Inside in the back is the original board room, where the money men smoked cigars and drank whiskey as they counted their profits.  Major decisions were made here affecting hundreds of lives. This is a far cry from the poor miner who was dropped several hundred feet down a very small hole, to sit with a sledge hammer and bar, pounding out rock to be hauled to the surface.  Once crushed, the copper was extracted, contaminating the entire countryside with lead. 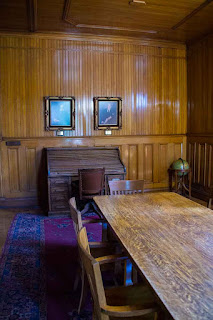 This is what they were after ... chunks of copper .... gold of another color. 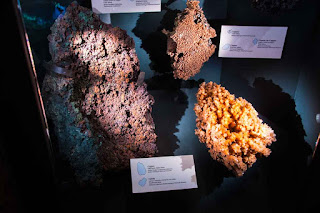 Along the way, they recovered lots of malachite and azurite, most of which was dumped in the tailings pile.  What little gold and silver was found, was processed separately.  There's still money in them thar hills, as the tailings were processed for years by gem hunters.  I was told today you can sign up for a two-bus trip (taking all your mining tools with you) that takes you to the tailings pile.  You can mine your heart out and keep anything you find.  Don't bother calling, the bus trip sells out the day before it's even offered. 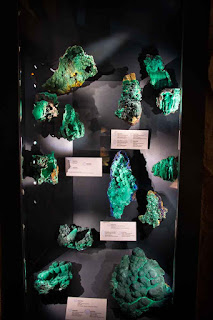 As a way to be as safe as possible, or at least know when someone was missing, each miner was assigned a brass number that he carried with him at all times when in the mine.  At the end of the day, the brass counter made sure everyone's coin was returned.  If not, everyone was called back in to find the missing man, dead or alive.  Miners became pretty perturbed when they discovered the guy had just forgotten and went to the bar before turning in his brass. 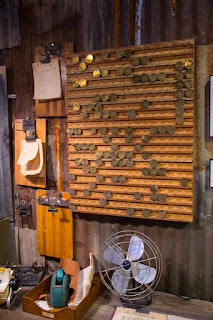 The miners made pretty good money for those days, most of which they left at the faro tables or the bar ..... or both.  Spades remain on the table, while the banker pulls cards from a "shoe".  You either win or lose depending on whether you bet the next card will match your pick on the table. 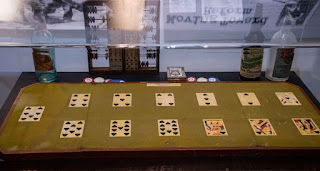 The mine owners wanted the best possible management and production for their money-making investment, so they brought hundreds of knowledgeable men from all parts of the world, including Serbia, Ireland, Italy and the Isle of Man.  That's where my family came from.  The red ribbon was worn by the President of the Manx Picnic.  They were pretty proud of their heritage!! 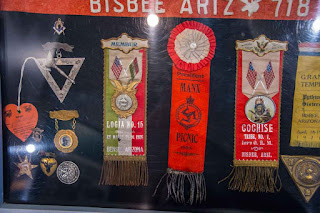 Ever wonder what happens in a rain storm when your town is built in a gully?  Yup ... it floods.  So what they did was build over and around the gully, making access pretty difficult in some places.  There's no place to park here and access is acquired by crossing the big gully and heading up the stairs.  Unfortunately, on many occasions, the gullies were smaller than the head of water going downstream, washing out many homes, which had to be rebuilt. 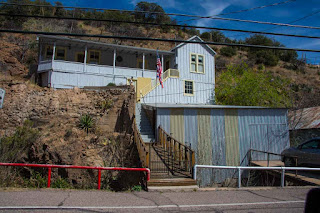 One of the poorer workers, Joseph Muheim, arrived from Switzerland in 1887, to work in his Uncle's saloon cleaning spittoons.  When his uncle died, he inherited the entire place and became the richest man in Bisbee, a town of only 800 people.  He eventually turned that into even bigger bucks, buying up property and becoming a banker. 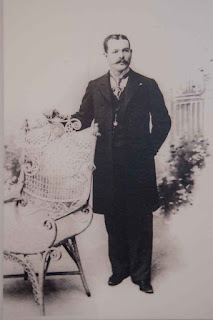 I just LOVE old houses, so when I found out his was available to tour, I tried to find it on my own.  Trouble is, the streets around here aren't much more than they were in the 1880's, although they are sort of a mix between broken concrete and asphalt.  I went up OK Street ... OH MY!!  ... a two lane curvy road only wide enough for one car, let alone all those parked here and there.

When I came upon a road maintenance crew, I'm think they could tell by the look on my face that I thought I must have made a wrong turn.  "You're not from around here, huh?"  Uh, no, and I think I'm lost.  They told me to go a few more feet and turn left ... as his hand made a distinct downward motion.  Not sure what that meant, I drove a little further and made the turn.  Still within earshot, I think they heard me say OH HELL NO!! because they came over to tell me it was okay, since I had a Jeep. 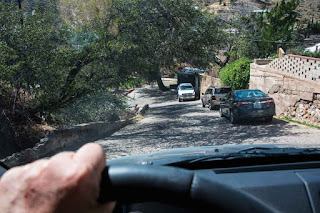 Pretty sure I was going to just fall off the hill, I made my way down to the 90 degree left hand turn, where I saw a wide spot to park ... the house is just to the right.  Unfortunately, I went a little too far and had to back up.  With one foot on the accelerator (and one close to the brake), I gave it a shot.  The tires squealed and I went nowhere!!  You've GOT to be kidding me!!!  Determined as ever, I quickly switched it to 4-wheel drive, before eeking back up to my parking spot.  I was sure when I got out, my Jeep would go careening off down the hill, so I very quietly shut the door and held my breath. 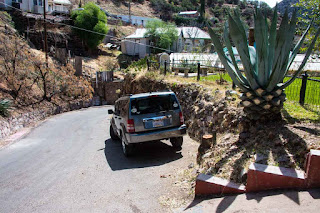 Since I didn't hear a crash as I turned away, I made it around the very small yard to the front door.  Definitely not a mansion like I imagined, but a very nice house. 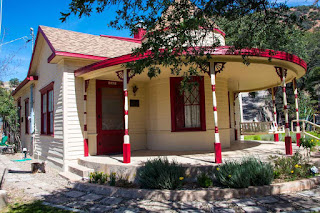 Originally this was a four room home, but as Joseph Muheim and his wife had more children, they added on and enlarged their quarters.  With a huge rock in the way out back, they made the walls at whatever angle they could when the kitchen was added.  The original tank-in-the-sky toilets remain, as does a lot of the furniture, including all the dishware and silver plated silverware. 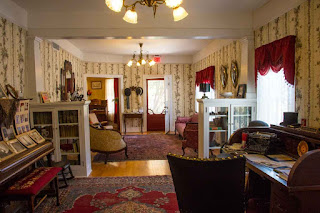 The Mrs. didn't do much ... everything, including the cooking, was relegated to the servants, who must have been in seventh heaven with this gas stove and TWO indoor bathrooms.  I spent well over two hours going through the house, just the docent and I.  She has lived in town all her life and knew all about the mines and what life was like in the "old" days.

It seems that when the mines closed, someone came along and discovered the reason lots of people were getting sick .... lead poisoning.  The town had been showered with lead from the pit mines and the smelter for years.  The road construction crew I ran into was more likely one of the mine crews going around removing the top 12 inches of dirt from everyones house and garden, replacing it with clean soil. 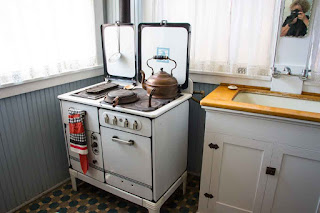 When it was finally time to leave ... I still don't really trust my AC unit to work for the puppies ... I cautiously and very gingerly got in my Jeep, held my breath as I released the brake and slowly drove to the bottom, where I intersected with a wider street.  Back in 2-wheel drive, I headed back to downtown Bisbee, admiring the little houses stuck in the hillside all along the way. 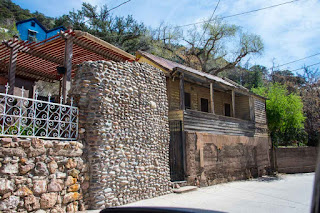 I returned to Benson without incident, where I caught up with Lynn and Dave for a dinner date.  That requires some more photos, so I'll tell you all about the good food tomorrow!!  In the meantime, I really want to return to Bisbee for some more exploring ... probably today.