Should I Stay Or Should I GO!!!

Isn't there a song with those lyrics??  That was my dilemma yesterday ... and I'm not very good at instant decisions.  I like to worry over them at least one whole day!!

After a LOVELY night in Quartzsite keeping the dogs quiet, I left early, hoping to miss the winds (and my cranky neighbor) that kick up pretty good around there.  The weather was perfect and the traffic light. 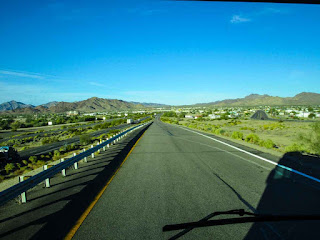 The flowers blooming alongside the road were beautiful yellow and gold.  This isn't the most exciting section of highway I've ever driven, but at least I got the camera battery charged.  Taking pictures keeps me occupied. 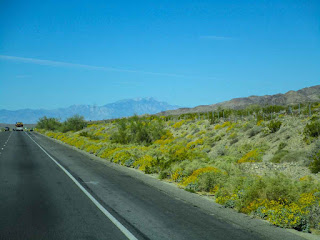 As I came into the valley headed towards Indio, I debated whether to spend the night or just keep going.  Lucky me, my phone was hanging in there as I checked the weather.  Gosh .. it's only 10:00 (I found out later, it was only 9:00 California time).  I might as well just keep on going!!  Two quilt shops would be reason to spend all day here ..... one, not so much! 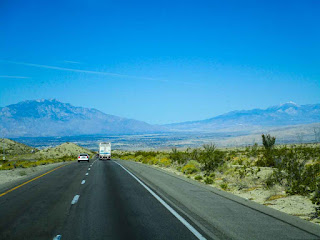 Debate over ... I kept going.  Once past Indio and Morongo, I was kind of lost.  I hadn't checked the route on my phone or even stopped for the puppies.  I finally found a rest stop open, probably one of only three in the entire state, but it was crowded and I knew I had a long five more hours of driving.  Oops ... I forgot to check my phone.   I just kept going ..... 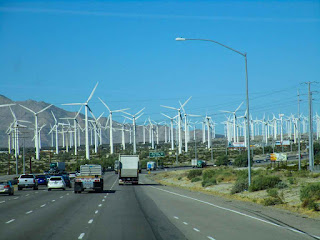 And going .... and going ... just like the energizer bunny, except THIS bunny was getting pretty tired. Suddenly it dawned on me I missed the first turnoff ... Hwy 210 up to 215.  By the time I could grab the phone and hit the right keys, my turn was behind me.  I knew there was an alternate route, so even though my phone kept saying Low Battery, I held it in my hand watching the little blue dot to make sure I made the right turn and didn't end up in Pasadena!!

It sure would make things easier if I had a navigator!!  GPS doesn't count, because she wanted me to go through LA.  I finally caught the right freeway, screamed up the hills at 45 mph and took 395 North to Hwy 58.  That's when I hit this long boring stretch to Mojave, before cruising over Tehachapi Pass with NO snow. 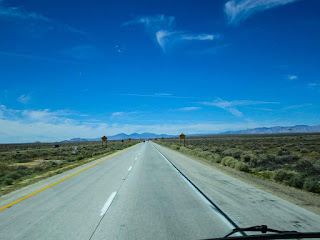 Almost down the mountain, the hills turned a rusty gold color from the flowers blooming like crazy.  Not that I had time to look ... this is a rather steep mountain! 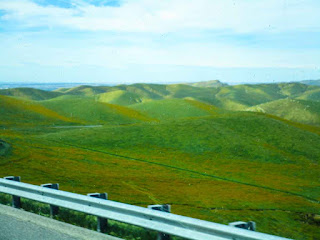 As I drove down the last hill, I could see all that smog waiting for me below.  In a few minutes I was parked at the Orange Grove RV Park outside Bakersfield.  There are still lots of oranges on the trees ... and now you can pick as many bags as you want if you are 10 feet tall. 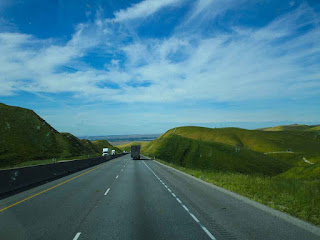 If I had the slightest inkling of sleeping in today, it was dashed by the trains heading up the hill at 4:30 (California time) ... I was awake of course.  I think I saw an ad that said California time changes this weekend, so I might as well stick with my current schedule.

Hopefully I'll be home in three hours today, with possibly a few sprinkles about the time I pull in my driveway.  I have every intention of crashing on the couch for the rest of the day, after cleaning out the freezer, moving Jonathan, opening all the drains, doing laundry, vacuuming .... a single woman's work is never done!!!