Looking up my ancestry trying to ascertain if I'm the great niece of Annie Oakley or Jesse James, I discovered a little more information about my Great Aunt Minnie.  I was astounded to find out that her REAL name is Wilhelmina Rosella, one of my grandfather's twelve siblings.  Can you imagine dealing with thirteen children in the 1880's??  My great great grandfather Daniel must have been rich beyond words!!

This beautiful Pompador doll made in Germany in the 1850's is now 166 years old.  Pretty hard to imagine, right?  Curiously, her name is Wilhelmina Rosella.  The bells in my head started dinging as I pulled out all the information I had, which happened to be hidden under her dress. 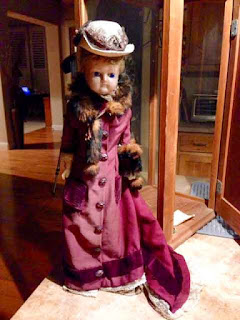 My Great Aunt Minnie, who never married, lived in Colorado and was a personal nurse to an 83 year old patient.  His younger sister owned the doll when their family moved from Germany to Denver in the 1800's.  The Gottisbagen's lived in a huge mansion with six bedrooms, six bathrooms, a music hall, a library, a "salon" and a huge kitchen and pantry, inhabited by a chef and many servants.  This is where my Great Aunt went to take care of him.  She called the young housekeeper a "scamp", up to no good ... who never really cleaned the house!

The family was so wealthy, that French seamstresses were brought to their home to make all the clothing for the mother, three daughters AND the doll.  Thus the fancy hand sewn dress with fur pieces

Upon his death, the place was closed up along with the doll.  Some time later his sister, now a Luckenbach, required nursing care, so my Great Aunt took the job. Luckily, the doll, along with many other possessions were finally delivered to Mrs. Luckenback after her brothers death.  She had two children, described as unmanageable, who would inherit the doll and probably destroy it.  Instead, she gave her to my Great Aunt for safe keeping.  I assume my Great Aunt named her after herself and she's has been in the family ever since.

In 1945 she came to my Grandmother and was then passed down to me.  In a letter (kept under her dress) written by my Great Aunt in 1968 (just before she died) about where the doll came from, she states "I'm glad Nancy will receive her, but she better not ever sell the doll, because I will come back and HAUNT her!!"  I totally believe that's true!!

The head is made of paper mache with a wax covering and real hair ... the body thin cotton, filled with straw.  She even has her own trunk with another beautiful red dress.

She's a little worse for wear as pieces deteriorate from age, even though I keep her in the glass case.  Today I'll go find her trunk and see how that's faring.  I'll also check her lineage on Ancestry.com and see if I can locate any of her original family information.

DARN!!  No Annie Oakley or Jessie James so far.