It's Pouring Rain In Arizona!!

I know you don't believe me, but BELIEVE me ... it rained buckets last night on two different occasions, even though my weather app said there was only a 10% chance.  It was a good thing though .... it settled all the dust that the gale force winds blew up starting at 5:00 pm.  Unlike where I live, they actually have WEATHER here in Arizona.

I was pretty much a lazy couch potato in the morning, but finally had to get my act together and go pick up my camera that I left at the Chance Ranch.  In order to get there, you drive by this little Catholic Church, the Shrine of Santa Rita in the Desert.  Patty's friend Pat had retrieved some  information that is very interesting, so I stopped by for some pictures. 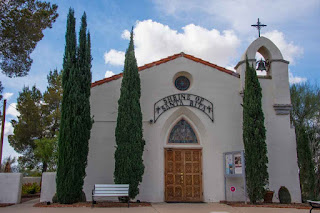 This little church was built in 1935 by Caroline Takamine Beach, in memory of her husband, Dr. Jokichi Takamine.  It is the only Catholic Church in the U.S. built in the memory of a Japanese citizen.  When her husband died in 1922, she married Charles Beach, a rancher in Vail and began plans to build a church for the 25 or so poor residents in this area to attend. 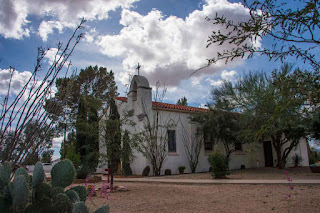 The church was built around the beautiful stained glass windows which were salvaged from the First Methodist Church in Tucson, upon their relocation.  Unfortunately I couldn't get inside ... they were closed.  If you happen to be about town in Vail, check it out.  Vail actually only has a couple of adobe buildings, so don't blink.  It was a water stop for the train on land donated by ranchers, the Vail brothers. 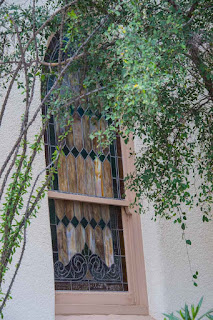 Next I took a quick drive into town to Grease Monkey for a Jeep oil change, where they recommended another $300 worth of trani oil changes, among other things, but I declined.  Wasn't I surprised however to find out they vacuumed the entire car (what they could reach anyway) and washed the windows.  For $48, I'm good for another 3,000 miles.

Since I was so close (maybe 4 miles) to Dickson's Deli and Meat, I ran over to pick up a few ugly steaks for my freezer.  I'm hoping I can barbecue them at least half as good as Dan does.

Back at the rig, I read some more about Doc and the Wyatt brothers and how the town turned on them, while I baked some horrible cookies.  Never buy the yellow packages of Nestle's cookie dough ... at least don't buy this variety.  They came out tasteless and hard as a rock!! I cleaned out some of the pictures on my computer and came across this one I forgot to post.  This is another painting by Brenda Peo.  Old Blu needed a buddy, so one similar to this ended up under my bed.  I'm not sure how that happens!!  Don't you just want to pet him on the nose?

When the wind began to pick up, I looked outside to see these beauties flying overhead.  It didn't take long before the sky was obliterated and the rig was rocking and rolling.  This morning I'll be cleaning up all the dust that settled over everything!!   One more day and I should be good to roll on down the highway. 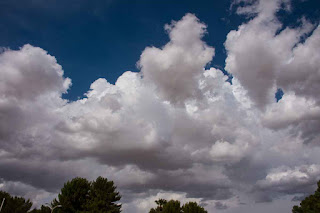 Here's another internet question for you.  These five Padia children were buried in the cemetery from 1922-25 I think, with Rita being on the left, 1923.  There were only white crosses with writing in tiny black letters before the City carved and placed the headstones.  What happened to this family? 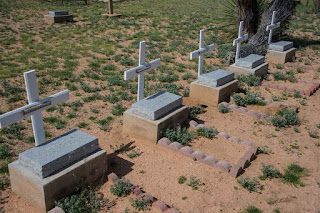 I'm actually enjoying just sitting with the puppies, reading, throwing the ball and discoing with Jonathan on occasion.  In the back of my mind however, is this little voice saying I should make just ONE more trip to the quilt store!