It's been said that a good veterinarian is worth their weight in gold.  I'm here to tell you that is true!!  Yesterday, I filled up the pockets of my Vet to the brim.  At the very least, I paid his electric bill for the next three months!!

I really can't complain, because this little guy is like my kid.  You'd do almost anything for your kids, right??  Cooper has a tendency towards bad teeth, so when it came time to have them cleaned, I went to the best Vet I'm acquainted with, which meant $$$$$$$$.

The initial estimate was a gut wrenching $560.  Unlike some vets who offer a low price, then add on things you might like to pay EXTRA for, like anesthesia and pain pills, this vet gives it all to you right up front. 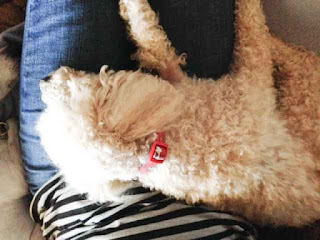 I dropped him off at 8:30 am, then ran home and tried to stay occupied so I wouldn't worry.  I have friends whose pets never returned, so I was a nervous Nelly.  At 10:30 the phone range.  OH NO!!!  My worst fears did NOT come true, as they only needed approval for another $50 to remove two bad teeth.

By the way she said, his vaccinations are past due.  Okay .... add that on, and while you're at it, can I get a prescription for a different heart worm medication?  I quit giving him the old one because it made him sick every time.  No problem, right?? 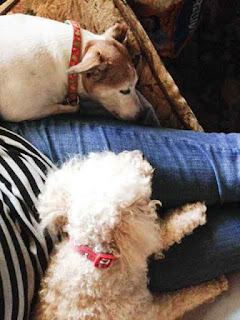 Finally a call that everything was fine and he was waking up nicely.  WHEW!!!  I was so relieved, all I could do was sit on the couch for the next five hours watching the clock.

I finally raced out the door and drove to town.  Ten minutes later I was in shock when they gave me the bill.  I asked for some oxygen, but that would cost me more, so I just bit the bullet and tossed my credit card on the counter.

We weren't even in the door at home and Cooper was going crazy looking for his ball.  Although I rolled it around for him a couple of times, he really didn't feel good.  I finally got him to sleep in my lap on the couch.

He's alive and well, so I'm a happy camper, even though I'll have to scrimp a little to pay the bill.  He's worth HIS weight in gold too, so what's a MOM to do!!

What about Miss Jessie you ask?  Well she ripped a big hole in her skin running through the rose bushes on the day I was taking my horses to a different Vet.  They had to put her out to stitch it up, so I asked them to clean her teeth at the same time.  $300 for the whole shebang!!  That Vet's pockets are lined with gold from the horses they treat!!!

I always wanted to be a Vet when I was a high school kid, but they wouldn't let females in the program.  I wasn't even allowed to take Ag classes at my local Junior college.  Maybe then I could have cleaned his teeth myself and MY pockets would be full of gold!!!  Hmmmm, but then I'd have to pay taxes!!!