The Blind Leading The Blind ...

That's what it looked like at my house last night as I tromped around through the bushes after dark following the landscape contractor, trying to get the lights to work!!  He came by early in the morning and installed the new box and all the lights came on.  I was so excited all day, thinking about how nice it would look and how much safer I would feel coming home.

By 6:00 pm when there was no sign of light, I grabbed my flashlight and headed outside, just in time to meet the contractor again.  He had come by to make adjustments to the lights, but since none were working, we wandered around in the dark checking all the connections.  Finally, I opened the control box, to find a timer that thought it was 3:00 pm.  He forgot to reset it when he replaced the control box.  As soon as I moved it around to the correct time, the lights came ablaze.  It's beautiful!!! 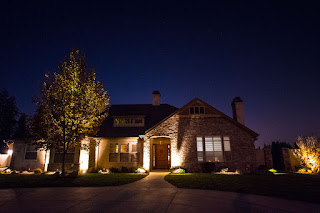 We decided it needs two more up-lights to even out the spacing and light up the dark corner, so those are on order.  I don't want to be shooting in the dark!!  One of the lights points towards this big tree, giving it a lacy appearance from the street.  VERY cool!!  I'm really glad I had this work done.  It's not only pretty, but makes me feel more comfortable. 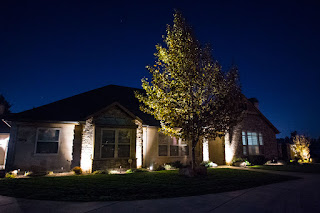 Back to the morning, breakfast wasn't as fun as usual.  In fact, it ended up being a pretty messy proposition.  I just LOVE those maple sugar instant oatmeal packets, though it's been awhile since I prepared one.  Too long apparently!  The directions said to microwave it for two minutes ... I think one would have been plenty, as most all of it ended up on the microwave plate.  Big sigh!!  I fixed another one and it was just as yummy as I remember!! 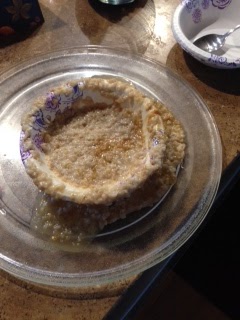 I tried to stay busy and not think about the lighting, by installing Jonathan's cage in the rig.  The first order of business was to remove the large awkward 45 pound loom down one step at a time to the sidewalk, then manhandle the oversized cage inside to the table.  Who needs to go to the gym when you've always got stuff to move!!  Miss Terry had a great idea ... put a non-slip rug underneath to keep it from moving around and protect the table.

Jonathan was having a great time shredding the towel over his house cage and screaming as I went in and out the door.  These guys can be pretty destructive, so cages must always be kept escape-proof.  They are worse than dogs when it comes to tearing up furniture!!  Yeah, just look at that innocent face!! 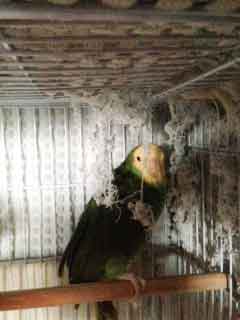 I really tried to put his cage everywhere possible so I could still have use of the table, but it was just too tall.  I used bungee cords to tie it underneath and it is very stable and totally non-slip.  No more crashing to the floor in the round-de-rounds.  If I really need the table, I can move him to the passenger seat. 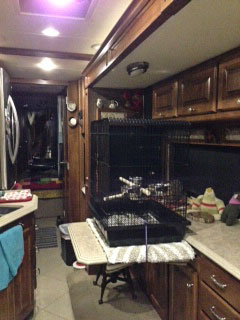 I hope if I keep looking, I'll run into a smaller cage.  One half this size would be sufficient and would fit on a countertop towards the front.  It's a load off my mind, that he has a safe place to ride in the rig.  Luck might not be on his side the next time he saunters down the aisle.  I have to say he has been a lot of company since returning home.  He talks to me constantly ... whatcha doing, pretty boy, disco Jonathan, kitty kitty kitty kitty - come on!!!  You can't help but talk back ... silly bird!!