Jonathan Has A New Friend!!

If you read Nick's Blog over at the Gypsy Journal website, you've already seen several of these pictures.  It's pretty hard for two bloggers in the same vicinity not to share images, especially when you had such a good time in the process of getting them.

Here's my baby boy Jonathan.  Not so much a baby boy nowadays at a tad over 40 years old.  I raised him from an egg, which hatched into an ugly duckling with no feathers.  Hand fed every two hours, they really DO feel like your children!

Jonathan is an entertainer ... he loves to Disco (bob up and down), do his Stevie Wonder impression (just like in a concert), dance around and generally entertain people with his chortles, whistles and "pretty boy" comments.  He is actually a SHE and falls for every good looking guy that comes in the door. 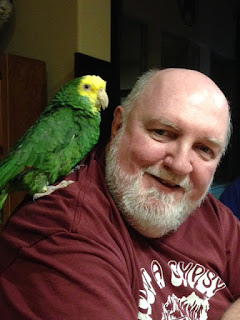 I think it's something about the voice.  As soon as I let Jonathan out, she climbed up on Nick's shoulder and began to whisper sweet nothings in his ear ... or maybe it was the other way around.  At any rate, she smothered him with kisses while Miss Terry and I looked on. 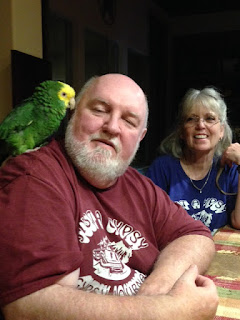 I've noticed some unusual things about Jon, so I really checked him out this morning.  I'm devastated to say it looks like he has had a wing broken.  I can't tell you how terrible I feel.  I'm the one that left him with friends WAY too long.  As far as I can tell, it has healed a little crooked, which explains some of his actions that have been worrying me.  I'll never EVER let anyone take care of him again.

On a happier note, Nick got a really cool birthday present (from himself) ... a Phantom Drone.  He flew it for the first time in my horse corral yesterday.  What a kick in the pants THAT was!!  Miss Terry and I kept our eyes on the drone the entire time, running to get out of the way when it came our direction. 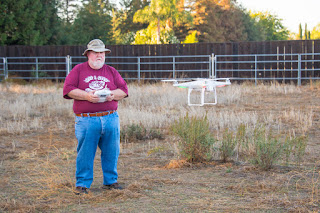 It didn't take Nick long to get the hang of it, screaming up in the sky and crashing down to earth!!  The controls are pretty touchy, and like our revolution kites, take a little getting used to. 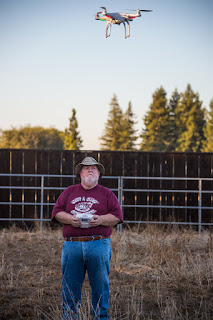 If you tell it to go forward, it tilts like you see here, and screams off ... kind of like a helicopter.  Even after a few crash landings, it flew like a charm.  This is one tough toy!!  In no time at all however, he was landing it upright and taking off like a pro. 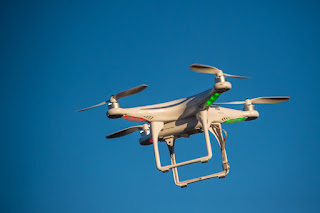 Nick says he plans on attaching a Go Pro camera for some Gypsy Journal aerial photography.  That's pretty nice to have a job that allows you to play with toys like THIS!! 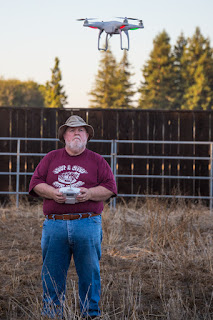 Halloween was fairly quiet until someone rang the doorbell and the dogs went wild!!  Neither Jessie nor Cooper like anyone ringing the bell ... it's even worse if you knock!!  All in all I think there were about a dozen trick-or-treaters, including a 5 year old Ariel that was the cutest thing ever!!  I'm going to have a consult with Miss Terry this morning to see how I can incorporate all this leftover candy into some kind of dessert treat!!

What did we have for dinner you wonder?  Why leftovers of course!  Isn't that what YOU serve company?  Lucky for me, Nick and Terry are very forgiving, especially when I found Tillamook Strawberry ice cream at my local store ... Nick's favorite!

Tonight's menu .... PIZZA!!  I made the dough two days ago and the sauce yesterday morning.  Yup ... this is Miss Terry's fabulous pizza recipe from her book Miss Terry's Kitchen.  You can see recipes on the website or better yet, order her book from Amazon.com.  Here's hoping I can get it baked without starting a fire in my kitchen!!