Sometimes when you don't have a honey to work on your Honey-Do list, and if you are really really lucky, your RV friends stop in for a visit and cut the list to ribbons.  Such has been the case since Terry and Nick Russell plugged their RV into my 50 amp site.  Once the garage lights were done, I couldn't think of anything else that needed repair.

But WAIT!!  Only two of the three sockets on the front porch light seem to be working.  Let's check THAT one.  Again, Nick dismantled the fixture and found one bad socket.  Might as well replace all three, so I headed off to Home Depot for parts.  This time I bombed out ... no candelabra sockets.  I was tempted to just return home, but Miss Patty Chance sitting on my shoulder, kept telling me to let them help fix things, so I drove across town to Lowes and found the parts. 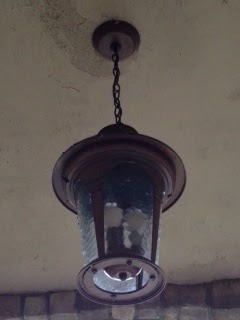 In less than fifteen minutes, Nick had the entire thing rewired and working.  How cool is that?  Any more lights not working, he asked?  Yup ... one above the bathtub.  I can't figure out how to remove the light from the ceiling in order to replace the bulb.  Miss Terry climbed up, took a screwdriver and popped it off in two seconds.  DARN they are good!!  So now, every single light fixture at my house is working!!  Hallelujah!!

To repay all their hard work and after I saw Nick's eyes light up at the mention of Miss Terry's pizza, my plan of pizza night came to fruition.  The dough had been resting in the fridge, alongside the sauce.  All we had to do was a little chopping and hacking and put it together.

Turns out it wasn't QUITE that easy.  You really need to cook the veggies first to get rid of the water or a soggy pizza will result.  It's also a good idea to pre-bake the pepperoni, which we did as the oven heated up to 500 degrees.  LOTS of pepperoni!! 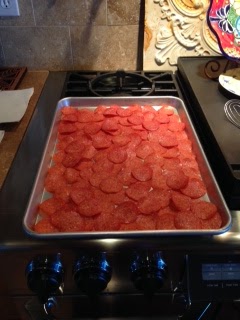 Pizza stones are a must, and should be preheated along with the oven, then for an additional 30 minutes or so.  That's what makes for a crispy crust.  I watched intently as Miss Terry put it all together. 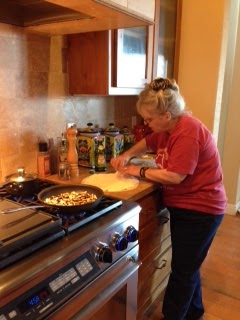 Have you ever seen anything so beautiful in your life??  If you're a pizza fanatic like I am, you'd go bananas over this one!! 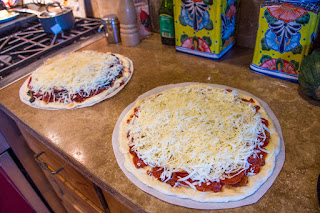 True to my cooking style, I opened the oven so Miss Terry could take them out and set off three smoke alarms in the house.  Holy moly Batman!!  How do you turn these things off when they are 14 feet in the air???   Finally, after turning on all the fans in the house and opening the back door, they quit of their own accord.   It was worth the screeching though ... look at this pizza!!! 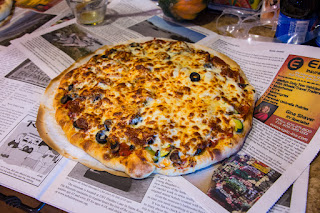 I can honestly say I've never had a pizza with so much flavor in my entire life.  It was CRAZY good!!
We even have enough leftovers for lunch today.

A nice big rain storm hit central California last night, waking up the dogs and I, and it's been pouring ever since.  I live in a very sandy area, so there are no puddles and no flooding here.  Hopefully this is just the start of a nice wet winter.

Today Terry, Nick and I will tour my RV in order to figure out a permanent place for Jonathan's cage, or at least a place where he can safely ride through the round-de-rounds and not crash to the floor.  I found an old cage at the ranch, so today we will power wash it and see if it's suitable for a bird house.  It's the perfect size, but a little rusty.  Unfortunately they don't make that type any more or I would buy Jonathan a new home.  He's such a sweetheart, he deserves the BEST!!