This is the time of year when the turkey buzzards or turkey vultures if you wish, come back to visit the neighborhood.  I'm not sure why, since it's so cold here, but maybe there's lots of frozen food laying around for them to eat from the bad drivers in the fog.  Although I haven't seen near as many as usual, there was a huge group hiding in the trees behind my house, named Buzzard's Roost after guess who!! 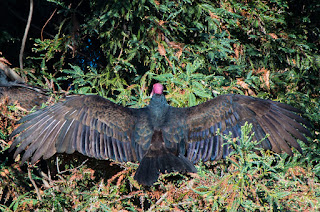 Not the prettiest face in the world ... in fact, pretty disgusting if you ask me.  It serves a purpose however ... that ugly skin keeps pieces of carrion away from their feathers, making cleanup a breeze.   They dine only on carrion which they locate by smell.  Their nostrils are huge, allowing for gases rising in the air from dead carcasses, to be located easily.  That's why you know there's something dead around if they are circling above. 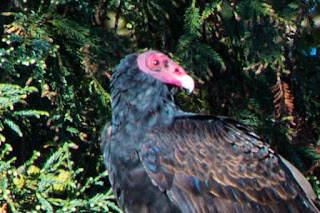 How many can you see in this picture?  Look closely ... there are a LOT!  As big and heavy as they are, they have to fight for branch space with the biggest guy winning.  In the early mornings, they spread their wings to warm up before taking flight.  Four of these guys are still sleeping with their head behind their wings, just like Jonathan. 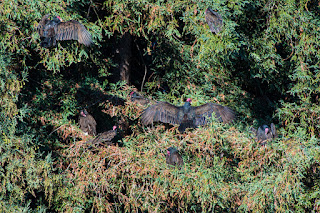 The next tree over had several more, as did every tree in the yard.  I love watching them, but am SO glad the trees are on my neighbor's property.  Can you imagine the mess?  YIKES!! 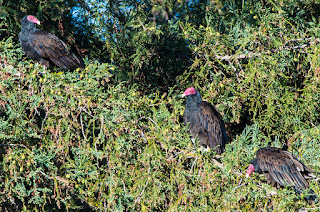 It was pretty quiet at the Magic Kingdom last night.  Surprisingly, the guards forgot to set up our table and chairs, so I had to confiscate some from the Bingo room.  You can imagine how that went over when the peasants came in to find THEIR table gone.  You'd think they OWN that specific seat!  Honestly, little do they know, for what they pay to play Bingo every week, they've probably payed for that table and chairs ten times over!!

The peasant that claimed we stole his $50, returned to claim we stole $20 instead.  That's the thing about lying .... it's hard to remember what you said last time!!  We just smiled and took his $60 for this week's games.

As hard working volunteers, we each get a turkey for Thanksgiving ... a much more plump one than those you saw above ... which were distributed last night!!  YAY for volunteering!!  I plan to smoke mine this year ... I'll let you know how that goes.

I was up early as usual, checking out the rising sun, wishing I was back in bed asleep!!  It's certainly beautiful this time of year, something I would miss if Cooper wasn't fixated on his ball at 5am!! 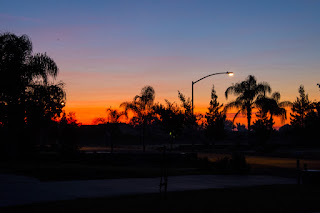 I had planned on a trip to Fresno this week to check in with Barbara and Tom Westerfield.  They are expecting a great granddaughter in a couple of weeks, which will actually be a great GREAT granddaughter.  At least I think that's correct.  We never got past grandmothers in my family.  Alas, the landscape guy called to say my lighting installation will start tomorrow morning, so I'll wait until next week.  If I put it off long enough, I can maybe, just MAYBE get to see the new baby!!

Nick Russell is still in the hospital ... seems he's having too good of a time with all those nurses, keeping his finger on the call button.  He better be careful or Miss Terry might just BREAK that finger!!  I'm sending out lots of good thoughts to all my RV friends today, wishing them a speedy recovery!!