Retail therapy ... the art of relaxation through the extensive use of a plastic card, slid through a magic device which allows you 30 days before you cry, requiring MORE retail therapy!!

I returned to Bass Pro Shop yesterday, through traffic worthy of Los Angeles.  What in the world??  Saturdays on our little piece of the world's byways are usually pretty empty.  It was slow and go the entire way, taking over an hour for a 40 minute trip.  I picked up a few things not readily available in my town, which is just about everything, then headed back home.  It's a long boring drive, during which I unfortunately remembered a Boot Barn along the way.  I rarely get this far North, so why not stop in and just LOOK! 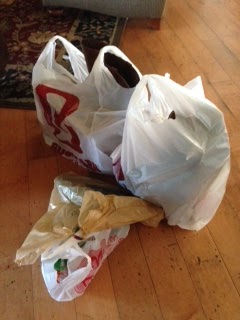 Retail therapy hit me hard, right between the eyes.  I was relaxing just fine when I discovered not one, but TWO pair of high top boots by Ariat.  It's okay I thought ... I can try them on because they NEVER fit.  Boy was I wrong.  Not only did they fit, but were perfectly comfortable!  Therapy seems to be working ... I feel REALLY good!!  So why stop now??  Their shirts NEVER fit ... but these two were again, perfect.  Topped off by boot trees (they keep your boots standing up tall instead of flopping over) and a new black purse and I was feeling mighty fine!! 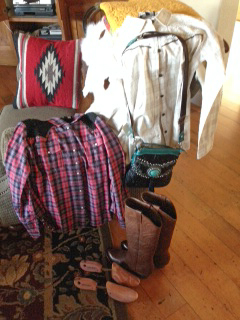 That is until I got to the checkout stand and had to pay for all that therapy!!  Yikes!!  It's okay though ... I have 30 days to come up with the cash, whereupon I'll need even MORE therapy to relieve the shock of the bank statement!

At least I was able to get my water lines wrapped at the well.  It's not a lot, to be sure, but rather awkward to get something akin to a swimming pool noodle around so many different sizes of pipe. 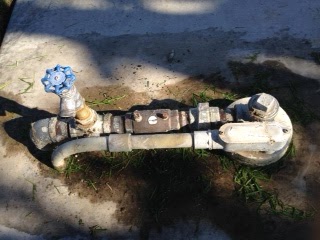 In the end, I was able to wrap the heck out of it with duck tape.  Boy that stuff is hard to work with!!  It sticks to everything you don't want it to and with the slightest touch, becomes permanently glued.  It took almost half a roll to get this done, most of which ended up in the trash can.  I think I've seen some heavy canvas-like cases around pipes.  Maybe I should check those out. 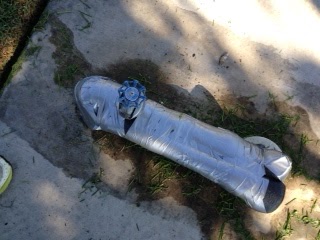 There's not much on the schedule for today, certainly not any more retail therapy.  I did note however that cage fighting is alive and well.  Holm beat Rousey ... knocked her out in fact ... bringing Rousey's winning streak to an end.  This kind of mixed martial arts fighting is brutal ... crazy in fact ... and something I don't care to watch.  What IS interesting is that everyone touted Rousey as the best fighter in the world since the beginning of time.  That made her think she was invincible.  Holm (from Albuquerque and the underdog of underdogs) ducked and dodged the bullets, biding her time, making Rousey infuriated ... which is why she lost the fight.

None of us are invincible ... we just need to keep fighting the good fight.  The same is true of our ISIS problem.  Instead of ignoring it with our prideful heads in the clouds, afraid we might offend someone, we should be paying attention and fighting the fight to put a stop to these terrorist attacks once and for all.

If I say much more, I'll need further retail therapy, which I can't afford until next month.  Have a great day RV friends!!