Back to the old drag, actually!!  Dieting sucks big time.  I really did my best not to overeat, only having one large plate of food each of two days.  One moment on the lips, forever on the hips.  That two day lip movement cost me three pounds, probably because of the cheesecake!  Of course sitting around doesn't help either, but at my age, I'm tired of running and working out with no corresponding results.  It's frustrating!!

Almost as frustrating for little Cooper is his current ball.  He's having trouble getting it to roll, can you tell?  Rarely does he chew up a ball like this.  That remaining half just doesn't want to roll very far!!  Still, we played with it for the entire day!  At least it didn't roll under the couch!! 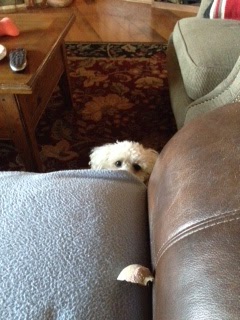 In an effort not to throw out all the leftovers, I've tried to get back on the diet, using only small paper plates.  This turkey, cranberry, dressing sandwich half was the first of many to come.  I think I have enough dressing to sink a battleship!! 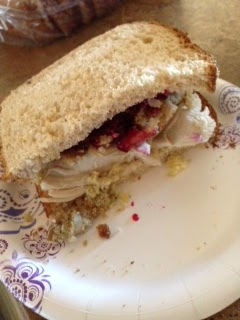 Just to get some exercise, I wandered over to the furniture store ... the only one in town ... to see what they might have in the way of a headboard for my queen bed.  My choices were to purchase a new King mattress ... $2000 (mine is 20 years old and getting saggy ... kind of like me!) ... but really, I don't want a high-in-the-sky king bed any more .. it's relegated to company,  OR I could purchase an entire queen bedroom set (using my own mattress) for well under $2000,  OR I could purchase just a headboard, which you can't, because they want you to purchase the ENTIRE set.

Decisions, decisions!  I think I got in almost two miles as I wandered around the store trying to decide what to do.  It's a beautiful set, much lower to the ground, just what I want, and with Christmas pricing, it's hard to beat.  The final decision came down to whether they could deliver it BEFORE Christmas.  So how does next Tuesday sound??  SOLD!!  Pictures to come later.

So when I got home, I began the process of weeding out existing furniture that has no heart string value.  One of the sales pitches began with "You can sell your furniture to the thrift store around the corner ... they will even come pick it up!"  I never even knew they existed ... but all the better to get rid of even MORE stuff. 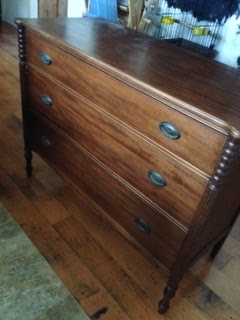 Minimal is my new word of the day, as I go through the house marking stuff to be gone.  Next up will be the closet stuffed so full of bedspreads and pillows I can't even open the door!!

Maybe a yard sale??  Oh bite your tongue Nancy .... yard sales are a BIG hassle and you really don't want to go there!!  I wonder who I might talk into helping me??  It's too cold.  Maybe in the Spring?  The light bulb goes on ........ stop it Nancy, you're talking to yourself again!!

Posted by Nancy Kissack at 7:19 AM