It's always something different at the Magic Kingdom of Bingo, and last night was no exception.  I'm a slow starter on Tuesdays since I don't have to get all snazzy until noon time.  Cooper is quite the snuggle bug in the mornings, so we just hung out on the couch and played potato. 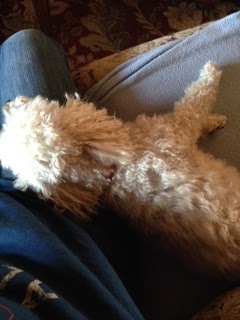 As I made the rounds of the house later, I took a few pictures of the things I want to get rid of ... and there's quite a few items.  I have two coffee tables, three chairs, a fainting couch and another queen bed.  I'll keep the king bed for the time being ... might even chop the legs off to lower it, although that may not be enough.  I tried putting steps up for Jessie ... even covered them with treats ... but she's an old dog that doesn't want to learn any new tricks.  She would still want to jump down, which at her age isn't a good idea.

Really, I'd love to put an ad on Craig's List or in the local paper, but I've heard too many horror stories about people who come to your door and I've probably watched too many cop shows!  I doubt they would buy anything when confronted with a gun as I opened the door.

I did sell this chair last night to the Castle Lawyer however.  This is the too-large recliner I bought for the rig.  I made her a deal she couldn't refuse ... so that's ONE down!! 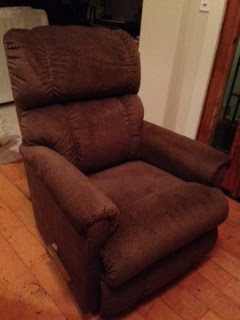 It was a slow night in Bingoland ... the third week of the month the peasants are usually low on money, paying for everything with nickles, dimes and never the correct amount of pennies.  Our Elks Lodge has a Boy Scout Troop who wanted to have a canned food drive for the local Food Bank as part of their activities.  What better way than to ask the peasants to bring two cans of food in return for one free bingo card.  I have to say I'm pretty proud of our group of players, who brought box after box of canned goods instead of the required two.

Can you believe it?  There was no fighting, no arguing and no cheating (that I know of)!  This small troop of Boy Scouts left with more stuff than they could carry, including 14 canned hams.  You should have seen the smiles on their faces!!  There were eight totally excited kids who vowed to gather even more next year!!  Now THAT was a unique experience in the Kingdom!!

Instead of the human variety of teddy bear, Cooper and I spent the last hour of the day snuggling again.  I don't know what I'd do without these little roommates.

I got the laugh of the year this morning when I read the comments on yesterday's blog.  Apparently I need a Russian husband who I can ply with lots of vodka so he doesn't mind my cooking,  and who can help me around the house.  A 90-day fiancé ... THAT's what I need!!  At the end of 90 days, I'll just ship him home!!!

Today I have to brave the supermarket lines ... I'm going really early ... to pick up a few last minute items for my turkey dinner.  Another storm is expected over Thanksgiving, which is just fine with me!  I'll get even more puppy snuggle time while I brush up on my Russian language skills.