LEFTOVERS ......  What in the world do I do with all this leftover turkey and dressing, not to mention the three quarts of green bean casserole.  After perusing the internet for recipes, I finally decided on Pioneer Woman's turkey tetrazzini.   There were rave reviews and it didn't involve cream, so I gathered the ingredients and went to town.

It took almost an hour to get it put together because I had to keep running to the television to watch the Raiders football game.   Since the recipe sounded like enough to feed an army, I cut it in half.  When it was all said and done, I had enough to feed a family of eight.  RATS!!  MORE LEFTOVERS!!

It came out okay ... not as tasty as I expected ... but it's an inexpensive meal that will last me for two weeks at least.  Maybe I should have used more wine ......

This guy came to visit again, causing the local birds to dive bomb him, squawking and screeching enough to raise the dead.  I could hear the commotion clear inside the house!  I wonder if hawks like cornbread stuffing?? 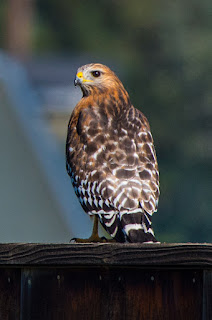 The second I stepped outside, I stepped back in.  With no clouds and no El Nino on the horizon, it was a chilly 31 degrees under my patio, making the outside a frozen 29 degrees.  I should be in Arizona!!  Even the puppies didn't want to wander across the lawn!!  My nose was even frozen in spite of the fireplace. 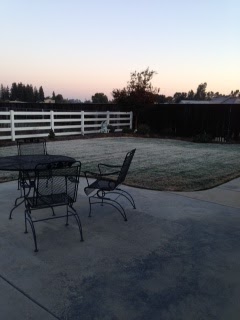 I tested my acting skills all day long .... switching between being a couch potatoe and a bump on a log.  I put the final touches on this small quilt, wrapping it up for my quilter.  Won't she be surprised when I drop off SIX at her house ... or is it seven.  I've really lost track!! 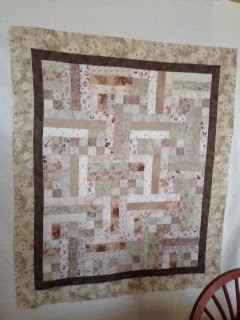 I know everyone isn't into football ... especially the ladies ... but yesterday's game between the Patriots and the Broncos in the snow storm was one of the best I've seen in a long time.  With practically everyone hurt, the Patriots tied the score in the last few seconds ... overtime.

It looked so cold on the field that I turned up MY fire to warm them up.  In the end, with the legendary Payton Manning out, Brock Osweiler threw an amazing touchdown to win the game.  The catches these guys make are beyond comprehension .... with the fingertips ... one handed!!  I really don't care who wins, I just like to watch the cute guys in their tight pants!!!

Back to the leftovers ... I pawned the green beans off on my neighbor and now only have four quarts of cornbread stuffing to dispose of.  I'm pretty sure the turkey vultures will clean it up if I dump it in the corral.  I discovered they have been roosting in a pistachio field and then in my corral ... on the ground!!

I know this because Jessie required another bath!!  I finally used my detective skills to follow her to the crime scene.  I'm pretty sure she won't do that again ... my screaming and wildly waving arms sent her back to the house shivering in her boots!!  Hey ... if you saw what she rolled in, you would do the same!!!  Her punishment was another bath ... poor baby!!

Now lets see ... who can I dump (I mean donate) this turkey tetrazzini casserole to??

Posted by Nancy Kissack at 6:57 AM