My computer awoke this morning to a large advertisement for CLEAR 4G Internet, but that's the only page I can access.  I guess they declared war and shut me down.  It's too bad I just purchased a new router two months ago.  When I clicked on CONTINUE, it sent me to the Sprint Store to purchase their equipment.  I suppose that's one way to get rid of unlimited customers.

So from now on I'll be using my Verizon MiFi for internet service, at home and on the road.  It was rather a waste of money to pay for home service and be gone for 7 or 8 months a year anyway.  Now if I can only remember to take it with me!!

Back to my wiring dilemmas ... I sure wish the speaker control had come in while Nick and Terry were still here.  I'm totally confused by these five little wires. 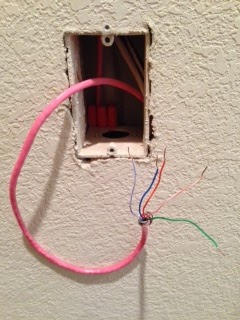 They are supposed to plug in to these, which plug in to the wall switch.  L+ L- R- R+ ... what does THAT mean??  I called Crutchfield's support and got a wiring tech who said he couldn't tell me what to do unless he checked the back of the receiver.  When I checked the receiver, I found 8 wires, none of them color coded like the above, and all MUCH heavier weight. 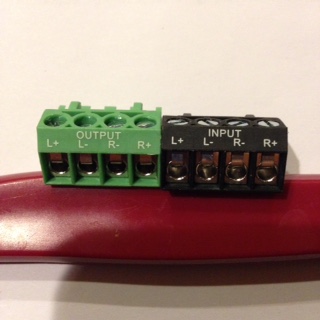 I figured the best way to find out what goes to what was to take another switch out of the wall and check THOSE connections.  (Big sigh) As you can sort of see, the wires are all much heavier, there are two sets, and they aren't the same colors.  These wires DO match the configuration on the back of the receiver however and the speakers connected to this switch work.  I uncovered one more switch to find two green wires connected to R- on each of the above and two white wires connected to R+.  Again, much heavier gauge.  What to do ... what to do!! 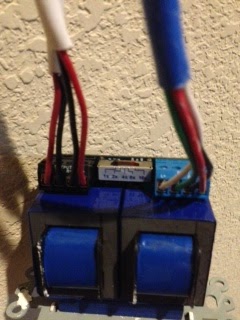 I stared at the five little wires for thirty minutes before putting all my tools away.  I guess I'll just put the switch in the wall not connected to anything.  At least I no longer have holes in my ceiling!!  Maybe someone in RV Land can tell me which wires to hook to which little plastic gizzy ... that's electrical talk!!

Good news on the laundry front however ... the sad little lone sock now has a mate!!  Seriously, I do ONE load of wash and a sock disappears.  I could probably get in on the newest fashion trend ... wearing two different colored socks.  It's all the rage in running nowadays!! 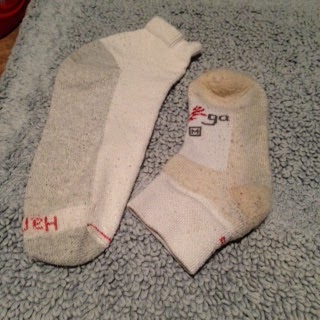 I'm off to Modesto on a shopping spree today.  Since I'm one of their "valued" customers, along with 100,000 other people, I received a 25% off everything I purchase coupon.  Who can pass that up???