Are you kidding me?  I'm still in California, right?  I'm pretty sure this isn't Kansas or Oklahoma, but as I sat watching the Denver Broncos get beat, I heard that awful warning noise come across both my television and my phone.  That's crazy ... there must be some mistake.  Sure enough, a tornado was headed right for me.  The next 45 minutes were going to be exciting, to say the least.

The sunrise might have given us some kind of warning.  As I was sitting at my computer, that beautiful pink/orange light flooded my living room, so I ran outside with my camera and shot this.  Funny, the roosters were crowing, but rather quietly. 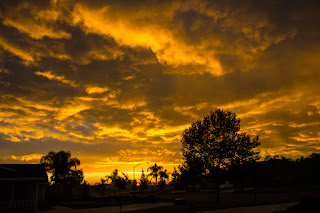 When I heard the warning, for an instant I thought about where I would go if it actually hit my house.  My second thought was if there was anything outside that needed to be moved or tied down.  What I DID however, was grab my camera and head outside.  The first thing I noticed was that all the turkey vultures that cruise my back yard had disappeared.  Uh oh .....

Although it looks like a black and white image, this is actually color.  It was crazy dark, with one layer of clouds moving very fast to the North, while the layer just above it moved very fast to the South. 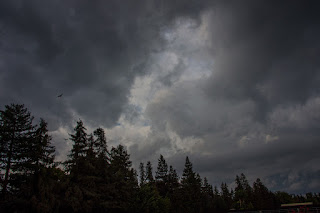 As it moved from both directions, it showed patches of blue sky here and there with a long black edge about a mile away.  I unhooked Jon's heater from my tripod and got set up for some lightning shots, close to the back door in case I needed to run inside. 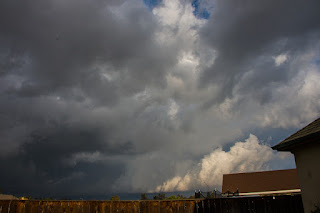 Any time now ....... although the winds picked up a little at the neighbor's house, it was dead quiet over me.  Nothing ... not even a breeze.  Apparently I was just on the outside edge of the tornado cell.  Two houses down there was blue sky. 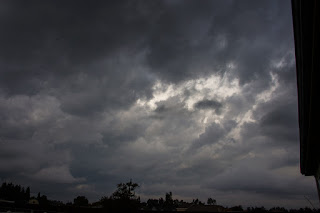 I dodged a bullet as the tornado touched down twenty miles North of me.  This picture is from a friend of a friend whose fence and roof were damaged as it rolled over their house, but thankfully all their pets and family were safe. 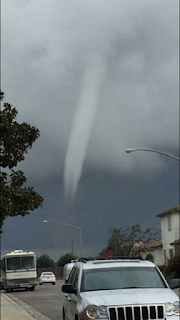 There actually have been tornados in California just South of me in years past.  I distinctly remember seeing a 2x4 stuck through a palm tree, but usually they are not really strong.  At least you won't see the devastation you see back East.  Nevertheless, it's pretty nerve racking for us Californians!!

Thirty minutes later, the sky full of puffy white clouds began to clear up.  No rain, no hail, no lightning and no amazing pictures. 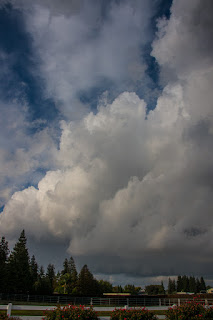 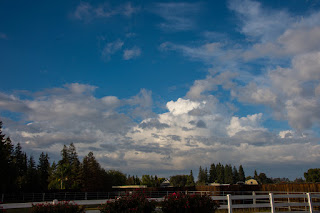 When the turkey vultures returned to cruise the air currents, I knew the cell had passed me by completely. 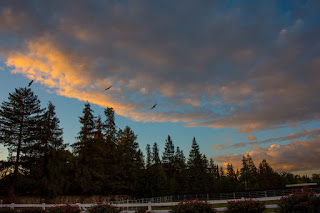 The winds have picked up this morning so much so that it's hard to close the door.  I think I'm in for a cold windy day ..... or maybe a little more Retail Therapy!!

I have a quick request this morning.  Most everyone reads either his blog or his newspaper The Gypsy Journal ...  friend Nick Russell is in the hospital for a few days in Southern California.  Please everyone send your prayers his way for a speedy recovery.