Weeding Out The House ...

There's been a gorgeous moon the last few nights.  I had every intention of sitting outside with my camera and tripod to get some great images of the stars, but the moon was so bright, there were no stars visible.  Okay then, we'll shoot the moon!!  I think the full moon will show itself tonight, but I'll be at the Elks Magic Kingdom around 7:00, the best time to photograph it.  Maybe Wednesday night! 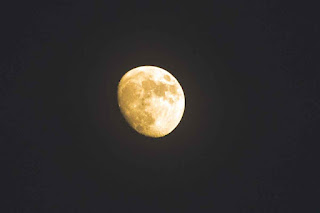 Early yesterday morning, I noticed Jessie sitting on the back of my recliner, on point, not moving a muscle.  When I stepped outside, I discovered why.  I had a new visitor to the back yard, one I've never seen before and one who obviously doesn't know the rules.  She was on point on the fence, not taking her eyes off something in the grass below.  I snapped this picture just before she jumped down.  I hope she doesn't make a habit of this, since Jessie doesn't allow kitties in HER territory!!  That's the rule!!! 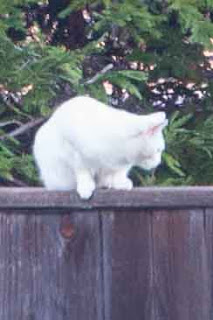 The rest of the entire day was spent moving furniture.  I have WAY too much and need to donate several pieces.  Twenty years ago, this bed was awesome ... you need a ladder to get into it and I'm pretty sure just the footboard alone weighs over 200 pounds.  Luckily, I can still climb that high at night, but it's a different story for little Jessie, who just turned 11 years old.  She's fallen a couple of times jumping up, which scares me.  Much as I love the bed, I decided to put it in the guest bedroom and find something lower to the ground. 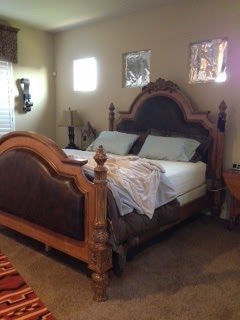 I got it apart with no problem and used those plastic things under the feet to move the footboard, but as you can see, the headboard didn't go far.  I dismantled the guest bed and set it up here, in spite of the cheesy frame that came apart the first time Jessie and I tested it.  Mighty puny looking if you ask me.  I'm not sure this queen bed will be big enough for all three of us!!  Cooper thinks it's great though ..... he has twice the amount of room to chase his ball around!! 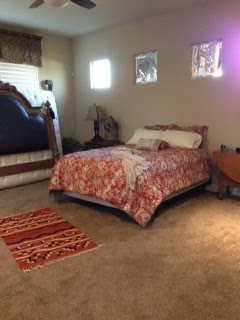 I'm hoping to recruit a couple of guys from Elks tonight, to come and help me move the rest.  I have a large television cabinet, a recliner and a couple of small end tables to donate before I have enough room to set up the big bed.  I figure if I weed out all but the necessities, there will be a lot less to move when the time comes.  That's a pretty tall order in my house, but I'm up for the challenge!!