Lucky for me, it wasn't a KITCHEN fire, but a nice cozy fireplace fire.  The nighttime temperatures have been dipping quite low around here, making me wonder why in the world I would want to move to Oregon where it's MUCH colder and wetter!!  At 38 degrees last night, it was time for my first fire of the season.  This is my main source of heat in the house, much less expensive than running the two big heaters.  You would think the dogs would love sitting on the warm floor, but they would rather be glued to my hips, becoming my second source of heat. 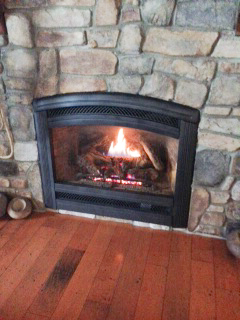 My project of the day was to fix the alarm system.  It wasn't as easy as I thought to get the battery changed.  I knew approximately where it was located, but it took some doing to get into the location, where I faced a locked cabinet.  With no alternative in sight, I called the Alarm Service for help, who told me where to go for the key.  When I finally opened the panel, I was shocked at the number of wires looking like a horrible rats nest!  I was afraid to touch anything for fear I might knock one loose. 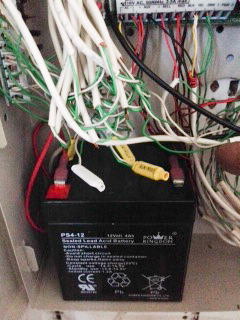 I took a picture of the battery and went on-line to see where I might pick one up.  After an hour, I gave up.  There seemed to be nothing in the world like this one.  I again called the Alarm Service who are now on a first name basis, and Alex said they would have to order one.  An hour later however, he called back to say they had one in stock that was larger, would last longer and cost $33.00.  There was that instant where I thought they were charging too much, since ones similar to mine were only $15, but I wasn't about to go without my alarm, so I raced over to Castle Air Force Base to pick it up.

Installation was a snap ... just like your car battery, red goes to red, etc.  I had to smush a huge bundle of wires out of the way to make room for the new battery that was twice the size.  With the door finally locked, I hid the key, closed everything up and crawled to safety.  YAY for me!!  The service light on the panel was gone!!  My house is again safe and secure!!  Too bad it isn't that easy to change the batteries on my rig!!

Today's project ... insulate all the water pipes and faucets outside that might break if we get a hard freeze.  I'm hoping El Nino will take care of that problem this year.  With that much warm rain, freezing pipes shouldn't be a problem.

I had an awesome visitor yesterday that allowed me to try out my new camera lens.  I'll post those pics tomorrow!