Dating and Turkeys ... Or Dating Turkeys!!

If anyone cooking Thanksgiving Dinner has a rock hard turkey shivering in the freezer, it's time to take it out.  In the OLD days, we did this the day before and left it in the sink overnight.  Now, in modern times they say that is a no-no.  You should let it defrost in the refrigerator, where mine sits as we speak.

There were a couple of years that I forgot and had to use a hammer and chisel to get the giblets out of the cavity.  They really don't cook very evenly either, if not thoroughly thawed.  This baby, my gift from Bingo, will be smothered in spices inside and out, then cooked in my smoker.  There's going to be a LOT of turkey for just one person!! 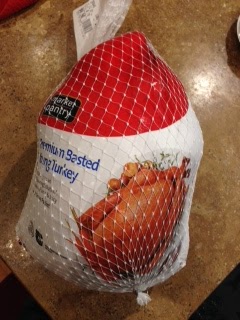 Speaking of turkeys .... several of my acquaintances have suggested I try on-line dating.  I even know a couple of women that have had success.  I just can't get myself to do it, mostly because I can't write a description of myself, and I figure when they find out what a good cook I am ... well you get the picture.    Oh I've looked at all the sites alright, but funny ... the same guys are on there for years.  Still, it's fun to see who's available.  Most of the guys my age are looking for 30-50 year old models, no game-playing, no drugs and no drama, but please have plenty of money!!

I was hoping one day I would find Tom Selleck or maybe Robert Redford in the list picked JUST for me .... but so far it's been a bust.  There are many more turkeys than prize winners.  Fellas ... don't take a picture of your boots, or your dog, or the mountain behind you or your belly as I saw this morning.  Women want to see your face!!  Those that take real close-up pictures next to the concrete wall are probably in prison and need not apply!!

Farmers Only would be the natural place for me to look ... at least we would have something in common, right?  Finally, my dream cowboy appeared real close to home, I'm talking 30 miles away.  Good looking, owns a small ranch, loves horses and dogs, traveling, country music and walks on the beach.  I think they all subscribe to walks on the beach.

Anyway, THIS just might be the guy I can spend the rest of my life with, traveling around the country in my RV and riding the back country on his horses.  We have SO much in common!!  Except for one minor incident ..........

He was just arrested for kidnapping, terrorist threats, battery, rape and attempted murder of a local woman he found on Farmers Only.  Yup .... right here in River City ... one of probably hundreds of predators hanging out on dating websites.  I'll still check out the site from time to time .... hoping Tom's handsome face will magically appear ... but in the meantime, I'll remain single, thank you.  That was a little too close to home!!