Looks Can Be Deceiving ...

What a nice lazy day yesterday.  That's what I wanted to start the blog out with, but it didn't exactly turn out that way.  It started off with a retail store return.  When I first ran into a store with the name Dress Barn, it was in San Francisco.  Sheeesh!!  I'd NEVER shop in a store with the name BARN in it.  Never say NEVER, because at this point in time, it's the only half way decent store around to buy clothes.  Pretty sad, I know!

After awhile, I realized the name BARN really did fit in with my lifestyle and over the years, I've purchased several blouses there.  I decided to wear one recently purchased shirt to the Magic Kingdom.  I wasn't there ten minutes when three different ladies came up and pointed out the sewing that had come undone on the front.  Instead of fixing it myself, I returned it to the Barn, explaining I had already worn it.  Believe it or not, they put a new tag on it and put it back on the rack!!  If you shop there, be sure to check under the arms before you buy ... looks can be deceiving!!  After all, it's a BARN!!

I'm still baking quick breads, adding to my supply, although this time I chose the small oven.  This was a batch of cranberry nut bread.  My kitchen skills, or lack of, came into play when the recipe called for a big loaf pan and 55 minutes of baking.  I know these little pans won't take that long, but HOW long? 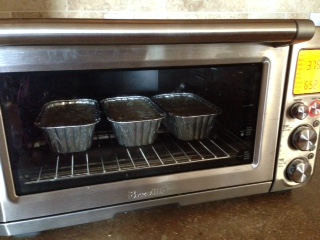 They came out nicely, along with a couple of Starbucks lemon loaves, but again, looks can be deceiving.  I tested every one with a toothpick and it came out clean as a whistle.  They looked done ... and tested done ... therefore they must BE done.  WRONG!!  When I took them out of the pans, the bottoms were a soggy mess, definitely NOT done!!  I know this is a no-no, but I put them back in the oven for another 15 minutes, which helped all but one.  Don't tell anyone, but THAT one went in the microwave.  It came out a cooked soggy mess.  I guess that one will be mine to enjoy!! 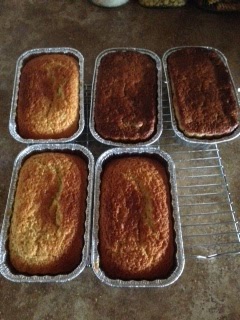 Yes, looks can be deceiving.  These yummy looking little nuggets aren't candy at all, but the ear plugs I finally found that work relatively well to keep the trains quieted at night.  I've had two lovely nights of sleep, making it hard to get out of bed in the morning.  Jessie thinks these are yummy looking too. She thought they were CANDY or at least doggie treats, and downed two before I could chase her off the bedroom side table. 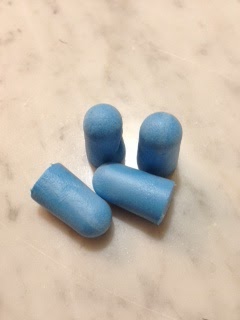 Looks are STILL deceiving here .... she looks all clean and pretty, even though she's guarding her toy, but once I sat down on the couch ... MY OH MY!!!  Miss Jessie .... you smell REALLY bad!  What in the world did you get in to??  It suddenly dawned on me ... the turkey vultures occasionally drop big juicy presents from the sky into my yard.  What dog wouldn't go roll in something that delicious in order to mask their smell when on a safari hunt for kitties in the back yard?  Well this one DID and she reeked!  BATH TIME!! 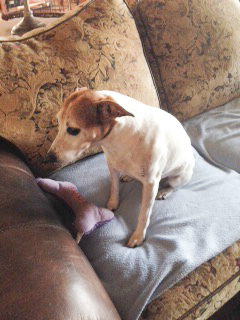 Once all clean and smelling of Johnson No Tears shampoo, we settled in for some snuggle time as a reward for not jumping out of the sink.  She HATES getting wet!!

The lighting guys are supposed to show up today and install security lighting around the house.  Then it's time to go retrieve that purse from the OTHER barn store ..... Boot Barn.  I just can't seem to get out of the barns this week!!