What in the world do you cook for dinner when the best cook in the West is staying at your house?  THAT is the question of the day.  I'm kind of a one trick pony and we had that two days in a row.

Here's a picture of the garlic bread we had the other night.  I TOLD you it turned green!  Really, that's not mold ... it's garlic!!  There just seems to be a gremlin sitting on my shoulder. 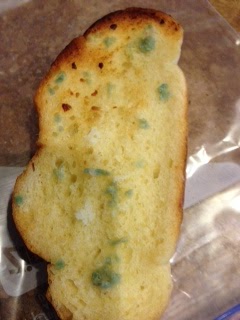 While I pondered the dinner situation, I unpacked the speakers I ordered and climbed up the ladder to install them.  It took awhile to figure out I needed to turn the screw so the plastic piece would hook on the ring in the ceiling.  Trying to hold the speaker with one hand while flattening the end of the wires with the other and pressing down the button to open the hole to receive the wire ... I really needed another hand!! 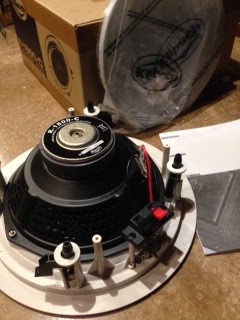 I finally climbed up another step where my head was smashed against the ceiling and held the speaker with my arm, leaving my hands free ... kind of.  After several tries, I succeeded in getting the wires connected, but couldn't let go of the speaker.  These things are really heavy.  I finally got it up against the ceiling where I held it in place with my head and one hand, using the screwdriver to tighten the connections.  SUCCESS!!! 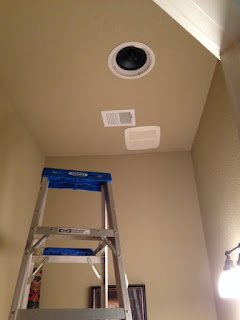 It took me fifteen minutes to figure out how to tune my receiver to music and make it go throughout the house.  Uh Oh .... I don't hear anything coming out of the speakers.  Every other room seemed to work as I moved the wall sliders up and down, making it louder or softer.  I know NOTHING about this kind of stuff, but I'm hoping since the slider on the wall nearest these is missing, that it must be connected before they will work.

Back on the internet, I ordered what I hope I can install in the wall, attaching it to the six available wires ... and have music from ALL my speakers.  Not that I ever listen to music in the house ... I don't.  Even if I never get them to work, at least I don't have holes in my ceiling that people always point to!!

My dinner dilemma was dispelled when Miss Terry said Nick wanted to take us to Applebees.  Thank the heavens for small favors!!  As I have said in the past, our claim to fame in these two small towns I live near is Applebees.  This is the best restaurant around ... second best is Colonel Sanders!!  Costco, if you count lunch.

They were pretty crowded, packed to the gills in fact, but it wasn't too long before we received our food.  I ordered the All Day Brunch Burger, since I've never had a burger with a fried egg on it.  What a novel idea ... it was DELISH!!  WAY too big for me, so I brought half of it home, along with most of the sweet potato fries.  In fact, we ALL had delicious burgers! 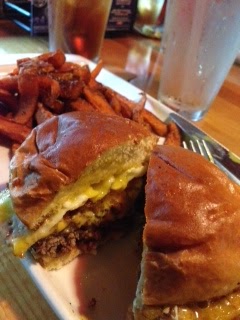 The most exciting part of the day was when we drove in the driveway to find my garage lights brilliantly blinding us!!  I programmed them in the morning for dusk to dawn and they WORKED!!  I think I should turn them off for the rest of Nick and Terry's visit however.  They look like a helicopter spotlight on their rig and will probably make sleeping difficult!

It's my favorite time of the year ... HALLOWEEN!!!  I usually decorate the place to look like a graveyard, which is loads of fun.  This year, the thought of cleaning it all up and packing the stuff away, just didn't sound like lots of laughs.  At any rate, I hope you enjoy the trick-or-treaters at your house!!  I'm ready with a big bowl of candy!!