Let There Be Light!!

This light fixture dangling from my patio made me nervous.  I know nothing about electricity, other than it can shock you badly, so to see this hanging around, ramps up my blood pressure.  Since I'm in the process of switching my household lights to LED and was a couple short, I figured to find a replacement for this at Home Depot.

I stood in the aisle for at least 20 minutes, looking at all the possibilities, when I noticed they had one hanging like mine.  Eureka!!  I discovered I could actually just replace the white part, not the whole light.  It looked like the socket was easily removed from the unit without disconnecting any wires.  After all, it's the brackets on the white can that broke.  Maybe I can do this!!! 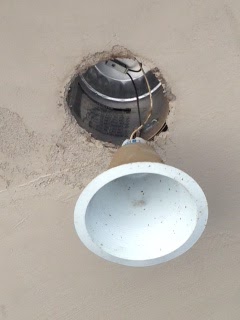 The hangars weren't exactly the same, but I figured if I shoved it up into the can, it would hold.  For $7.00, it was worth a shot. 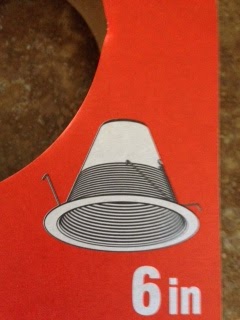 It was easy to unclip the socket from the top of the old one and reattach it to the new.  I can't believe I'm actually doing this!!!  I'm fixing a LIGHT!!! 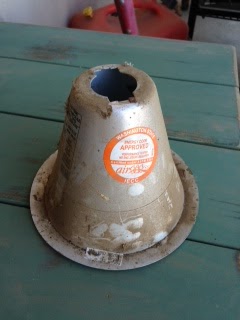 It wasn't as easy as I thought to get it to stay up in the can ... the little arms probably aren't in the perfect position, but it stayed up when I let go!!!   It even stayed when I screwed the LED bulb in.  I hid behind the door as I flipped the switch ... and VOILA!!  Let there be light!  It worked!!  I was so excited I did a little celebration dance!! 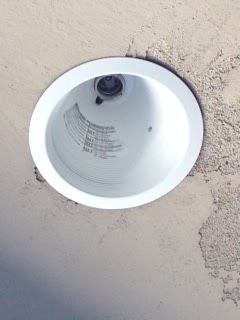 With my tallest ladder, which still isn't really tall enough for me, I hung on to the walls and cabinets while installing LED lights in the kitchen.  The number of lights in this house is ridiculous, to be sure!!  You can see that the one in the middle is still an old CFL light, not putting out near as much light as the other three.  The living room is even worse with seven lights and five speakers.  Crazy, right?? 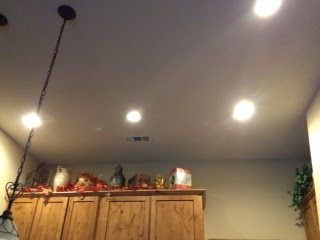 I'm only replacing lights in the areas I use most, since these run about $8.50 each.  Yes, I'm taking every single one with me when I move!!!  With LED's, I can actually turn my lights on and see what I'm doing.  All this time I've been sitting in the dark because I didn't want a $200 PGE bill!  It's pretty much the beginning of my billing cycle, so I'm anxious to see if there's any difference in the usage.

My attempt to fix the garage lights failed miserably.  They can all be set as dusk-to-dawn or motion detectors.  Out of four like this one, one stayed on all the time and one worked with the motion detector.  At Home Depot, I picked up three little socket things with dusk to dawn detectors ... just screw them in the socket, then add a bulb like normal.  I thought maybe the detectors went bad in the light fixture.  I guess I did something wrong, because now only ONE light works on the motion detector part, and my entire garage area is pitch black!!  Geez Louise!!!  I need to take a course in electricity! 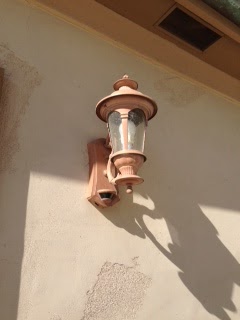 In case you were wondering about landscape lighting, this is the total amount of light at the front of my house at night.  Not the best for security, right??  Hopefully that will be fixed with some new installations by the landscape guy. 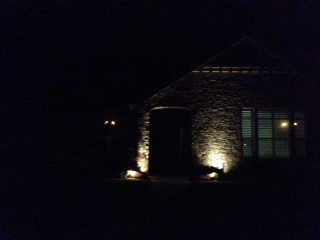 I'm hoping Terry and Nick Russell will be able to stop in on their way to Arizona this winter.  Nick says he DOES know electricity and can maybe rewire/repair and otherwise fix my garage lights.  I offered a 50 amp hookup with water and told Terry I'd go one better, the laundry will be open 24/7 with no quarters required. It sure would be nice to see them again before they head off into the sunset of Arizona.

It was a lovely 57 degrees this morning with highs in the 70's ... MY kind of weather, just in time for Magic Kingdom night.

Posted by Nancy Kissack at 7:29 AM