The full moon conjures up images of witches, howling wolfmen and E.T., along with a huge group of bingo players.  It's good luck of course!  Although it was night before last, that doesn't make it any less powerful.  Add to that it's the first of the month, meaning payday, and we will be bombarded with peasants tonight.  It's okay, it's all for a very good cause.  Last week it was the Relay for Life.  This week Children's Hospital in Fresno and next week the burn center.

So I couldn't let the night go by without taking a few moon pictures. 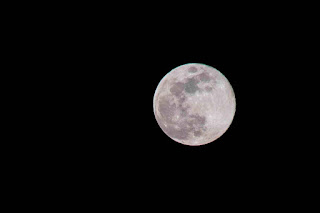 First thing in the morning, Miss Jessie went to get her stitches out.  Half her front leg had staples making it look like a zipper.  Once home, she slept on the couch for several hours.  It didn't take long for her to recover, since at exactly 3:00 pm she was up and begging for food.

I'd show you a picture, but it's still pretty gnarly looking.  This morning she is limping less on her OTHER front leg, so hopefully we're on the mend.  The night on the couch wasn't bad at all.  In fact, it may just be more comfortable than my bed!!  Weirdly, it seems quieter, probably because Jessie isn't going in and out the bedroom doggie door. 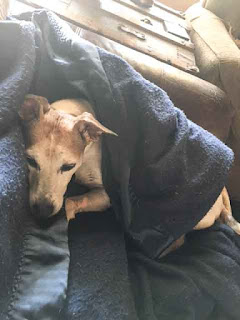 The luck filled full moon did bring some wonderful news to my house.  My accountant called to say I'm getting a TAX REFUND!  Can you believe it?  I've paid through the nose for so long I didn't even know what a refund was!!

Of course it's all because of the Arizona Rental.  As much as I could have a blast spending it, that windfall will stay in the bank as a cushion against further taxes.  I learned that lesson the hard way.

One small piece of bad luck snuck through the moon's influence however.  The o-rings/washers missing from my Delta faucets.  I have an entire house full of faucets with no washers.  That means water squirts out over the thingy you screw on that contains the screen.

It's called an aerator.  I've spent hours scanning the internet AND local hardware stores to no avail.  I finally called Delta who said they don't make washers ... they only make aerators with washers, meaning they are going to stick their hand deep in my pocket for $20 each.  Are you kidding me?

That's $120 for 20 cents worth of washers.  Sweet man that he was, he finally said he would send me one for free to see if it worked.  If it did, he would sell me the rest for half price.  I gave him my Post Office box number.  Oh no .... we HAVE to have a physical address.

Another long winded explanation of the mail fiasco followed, whereupon he said "no problem ... we ship UPS right to your door".  Okay then!!  Send it out!!

But wait!!  You are in California, and we can't ship these to California because you have rules about how much water is allowed to come out of the faucet.  WHAT????????  Yup ... it's true.

He finally found the correct part and the sale was made.  I waited patiently until I decided to check the tracking information.  Four days into the process, UPS transferred the tiny part to the U. S. Post Office.  That means it will be rejected due to incorrect address.

You would think they could just stick it in my box, right?  But NO ... they will send it back, probably in about three weeks, with a note telling Delta the CORRECT address, which they won't mail to because it's a P. O. Box.

So tonight I'm going to beg like I've never begged before to get someone from the Elks to come help me install a mail box at my house.  Remember the neighbor knocked it down?  So much trouble over a tiny 20 cent washer!!!  But then it IS a full moon!!!