Some Rain Must Fall

It's time again for Nancy to put on her manly gear ... ranch levis and boots.  There's MAN work to be done around here.  Unfortunately, I'm not like most men who can eat anything they want and not gain an ounce, or just THINK about dieting and have the weight fall off. 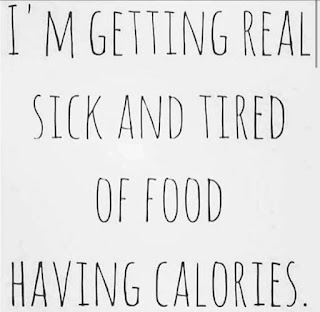 Into everyone's life some rain must fall, and I guess it's going to sprinkle on my diet forever.  In spite of all my efforts, I'm gaining back some of the ten pounds I lost.  In an attempt to keep the Doctor happy, I'm running two miles every other day, giving me sore muscles every OTHER day.

Once I get over the initial shock of gasping for air and feeling like I'm going to collapse in the middle of the road, there is a fifteen minute period of euphoria when I feel like I did something good.  That's when the coughing fits begin that clear my lungs of all the smog I breath here in the Valley.  Sounds like fun, right?

This guy keeps me going however.  No matter how much rain falls in his life, he's on my roof every single morning chirping away as loud as he can.  I'm not sure if he's looking for a lady friend or just designating his territory, but he never fails to show up at 4:30 am.   Rather a bad picture since it was still dark out. 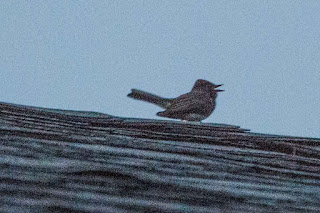 Last night about 2:00 am there was a huge boom that woke up the dogs and I.  I was sure an airplane had crashed next door or maybe a train had blown up.  CRAZY loud!!  Just as I tried to get back to sleep, my totally closed up bedroom lit up like a Christmas tree!  That's when the rains came.

YIKES!!  We never have that kind of lightning storm around here.  Slight chance of thunderstorms they said and yet the rain falls like me dumping out a bad batch of soup in the cemetery.  It's pouring!!!  The good news is that it will help my brown patchy lawn. 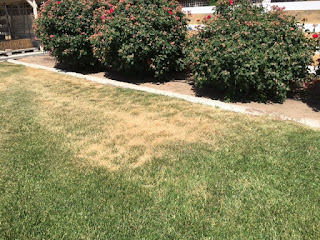 Since the gardeners aren't going to repair anything, I decided to do it myself.  I grabbed a shovel and tried to dig up and tear out half of a huge bush that was blocking the sprinklers path.

My sore muscles didn't help much, but I did make a nice big mess accomplishing half the task.  Maybe when the rains quit, it will be softer digging.  On to the sprinklers.

You probably can't see it here very well, but several of the heads are tilted way to one side, making for brown spots like the above picture.  I don't know how I thought I was going to fix it, but I dug it up just the same. 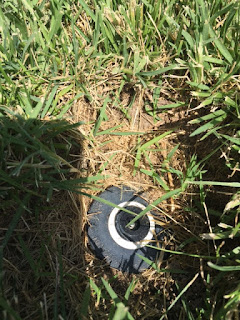 Come to find out, they are rather flexible (??), so I straightened it up and filled the dirt back in.  Gee, I seem to be much better at fixing sprinklers than I am cooking!!  I have three more to repair. 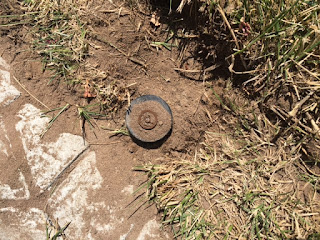 When the mowers and blowers came by yesterday, they saw my hard work and apologized for not fixing it themselves.  Yeah right!  I gave him two sprinkler heads for the front yard, which he installed digging up one and straightening it like I did, before testing for coverage.  I was spying on him out the window the whole time.  I'm hoping they work.

To repay myself for all that hard work, I baked some cookies.  Hmmmmmm, maybe that's what's wrong with my diet.  Anyway, chocolate chip walnut morsels of overcooked deliciousness.  I baked them in the big oven, which obviously doesn't have very even temperature.  More rain in my future when I call the repairman. 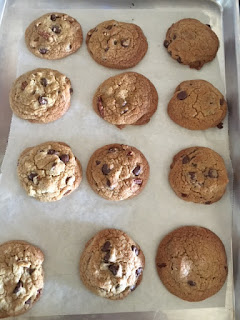 Just a note ... Miss Jessie has been very sick the last few days, but seems to be turning the corner.  That's rain in my bathroom every day that I'm pretty tired of cleaning up.  Cooper also seems to be on the mend.  I keep thinking it's the food.   Much as I'm missing out on an RV Rally up north, I'm glad I made the decision to cancel and stay home with the puppies.  It would have been much worse to be on the road with two sick dogs.

My hand?  It's doing VERY well and I'm back to hand sewing, just not for long sessions like before.  There will be a little sprinkle of rain in YOUR life if you read my blog, because I've got four quilts in the works to show you.

One is a sampler quilt, something I've never tried before.  One block a week for seven weeks comes to my Facebook page with all the instructions.  It's a free pattern online from National Quilter's Circle.  Now all I need is fabric!  A trip to the fabric store will definitely make the rain go away!!