I think I've spoken about Apache Frank (Red Feather) before.  He's a five foot tall 135 pound World War II veteran who showed up at the VFW and was adopted by our Elks Lodge.  Prince Charming from the Magic Kingdom makes sure he's taken care of and pays all his dues, since his income is ridiculously small ... inflation and all that, I suppose.

Born in Mexico, his family came to the U.S. to escape the Indian Wars.  He lived in and around Fort Huachuca, doing odd jobs like feeding the calvary's horses until he turned 17.  That's when he joined the Army and was sent to New Guinea and the Solomon Islands.

You never see Frank without an Indian headband underneath his ball cap and a big smile on his face.  His favorite drink is Corona, of course, and his favorite saying Ya Te Hey, a Navajo greeting meaning it is well, can be heard clear across the room.

Over the last year or so, we discovered he was wounded several times, but never received his Purple Heart.  Since he joins us every Tuesday night, we have been picking his brain for information.

It seems while on his way to New Guinea, he was sidetracked in Pearl Harbor.  They stuck him on one of those big guns and he proceeded to shoot planes from the sky.   About that time he received his draft notice in the mail, thus some of his history was lost to the Army. 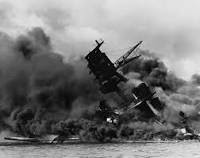 As we sat at the table talking, he recounted battles and the men who commanded them, along with specific dates, which we were able to corroborate instantly by checking on the internet.  Every single name and date was correct.  Amazing that someone 98 years old could remember all that stuff!!

He did whatever he was told to do, from being a tail gunner (having never flown in an airplane before) to being a boat captain in the Amphibian Fleet (no experience whatsoever).  There was plenty of hand to hand combat in between, where he received several bayonet wounds.  Lots of it he didn't really want to remember, so we skipped around that part.

His brother was with Ira Hayes on Iwo Jima when they raised the flag in the iconic picture, but was soon killed in action over the next few days.

In the end, we hope he will get a trip to Washington DC in order to receive his Purple Heart.  At least that's what we are shooting for.  By the way, he is also a part of the Veterans Military Funeral organization (made up of mostly Elks members) and he plays taps at every funeral ... on his trumpet.  He's an amazing guy!!