In spite of my best efforts, sleeping on the couch with the puppies hasn't been my greatest idea.  It's only out of necessity that I require a lower-to-the-ground bed.  A couple days ago, just before the stitches came out, Jessie Belle jumped off the couch and hurt her OTHER front leg.  She's been limping around ever since.  There's no way I could keep her from jumping off my much higher bed.  I'm here to say the couch is much improved over the floor, however.

I've tried all kinds of steps, including my big ottoman.  If she's going to jump, she could use that.  But NO ..... she goes through all kinds of contortions to go around everything I put up.  Here we were yesterday, watching the baseball game, just before I fell asleep.  Attached at the hip!! 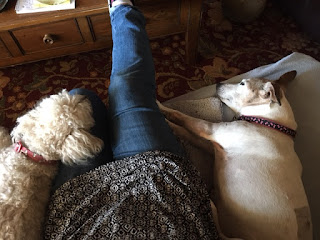 She's definitely on the mend.  This is her four inch long zipper leg, minus the zipper staples.  It's looking MUCH better and has shrunk up considerably.  YAY for shrinkage! 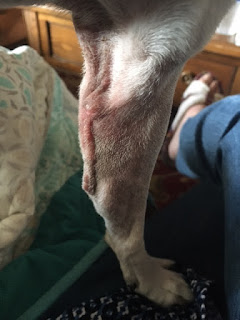 My breakfast, on the other hand, could use a little LESS shrinkage.  I mean really, this is a sad state of affairs.  I grabbed a package of pre-cooked bacon, but when I got home, it had turned into this.  Microwave-in-a-package bacon.

It took two minutes to shrink these nice slices into miniature pieces less than half the original size.  I probably should have bought the real thing, but I just didn't feel like dealing with the bacon grease mess.

In the old days, we had a can on the stove for grease.  Mom and I used it almost every day in cooking fried potatoes, fried meat and fried vegetables.  When the world discovered frying was bad for you, the can went bye-bye.  I LOVE bacon, but not the resulting mess, even when using a sheet pan in the oven.  THIS is a LOT of shrinkage!  It was also mighty tasty!!! 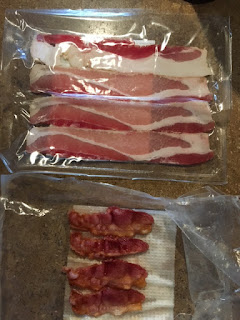 Before it got too warm outside, I began the daunting task of shrinking everything inside the belly of the beast in order to fit two big tables in for the next RV rally.  It may look like there is tons of storage space underneath my rig, but looks can be deceiving.  The bad news is that it's all necessary stuff.

I had two big containers holding sewer hoses and extension cords, along with jack pads and a few 2x6's for leveling.  All that had to be moved and shrunk down to fit elsewhere.  The big box of Indio Rally stuff went in the garage, along with my dutch ovens.  The tables still didn't fit.  Too bad I can't shrink THESE down!! 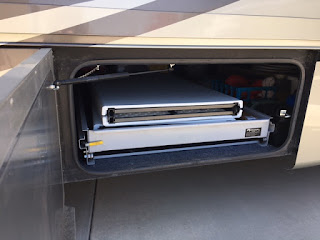 There is one other compartment they fit into, but only if you angle them and wrangle them in.  This will be the last time Nancy takes the tables with her.  I'll be heading to Northern California before too long.

In the meantime, I'm trying to shrink the size of my back yard lawn in order to lower the gardening bill and the electrical bill for my well that waters it.  It's not looking good unless I do most of the work myself.  It's going to cost twice as much to take it out as it did to put it in.  That's definitely expansion.  Similar to my weight ... it seems expansion is SO much easier than shrinkage!!