Drop One, Pick Up Four

Sounds like my knitting, right?  I have the same addiction to yarn as I do fabric.  I can crochet anything, but all the good patterns are made for knitting.  I tried, believe me I did.  Barbara and Tom Westerfield tried to help me all the way to Bangor Maine and back.

Barbara is a pro who can whip out a beautiful sweater in the two hours it takes them to go down the road in their RV to the next stop.  Try as I might, I always had troubles.  I couldn't seem to count right and I was always dropping stitches.  Tom would ask how I was doing and I would lament my slowness.

The next day he would ask again, and I would have to admit I had ripped it out four times and started over.  I don't think I EVER finished a pattern.  Which is why I decided to stick with sewing quilts.  At least I don't have to rip those out quite as often!!

I'm pretty sure by the time I was done, there were fifteen quilts at Ann's house waiting for batting and her magic machine.  When she called to say come pick up four, I had one more to drop off, thanks to you readers for finding my mistakes.

Here's the first one you may remember from when I was in Arizona.  Get your sunglasses out!! 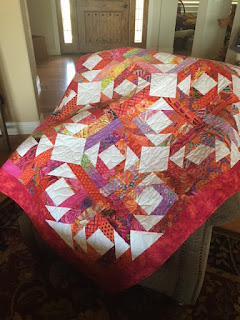 Here's the backing for it.  Pretty wild and crazy, right?  I hand stitched the binding all day long to get this one done. 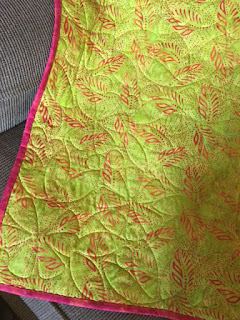 It's always fun to put something wild on the back of a quilt ... something unexpected when you turn it over.  This one hits the mark!! 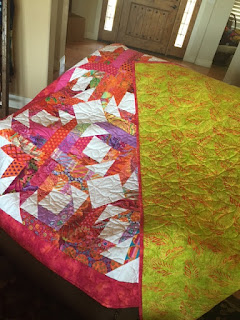 Next up for binding, another one from Arizona.  It's the same pattern as the one above, just different colors.  I was having trouble finding backing when Ann suggested this one she had in her stash.  Now there's something I would NEVER have picked up.  Today I'll head to the store for binding material.  Somehow I used up two pieces I shouldn't have. 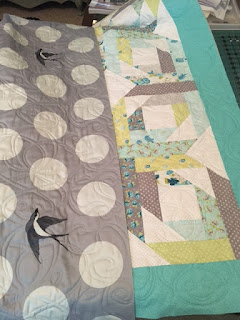 The sky was particularly weird as I headed out to the Doctor yesterday.  The good news is that I'm still alive, a plus in my book.  Even better, my cholesterol is 156 ... much improved from the previous 300.  I have to give it up to the Nutrisystem diet which I stayed on for four months after taking Lipitor for five.

Basically, they take away most all the fat and carbs, leaving you with healthy meat and vegetables.  Boring for sure, but it seems to have worked, not to mention it's about $100 a month CHEAPER than me going to the grocery store.

Unfortunately, I'm going to die of triglycerides, whatever those are.  More exercise he said.  Good grief, I thought when I got this close to the 70 year mark I could just sit back and enjoy life.  Exercise is too much like WORK!! 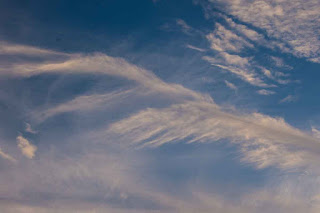 That's also when he asked about all these other tests.  Really?  You just said I was healthy and you want me to take more tests?  Is this a trick question?  Bone density, circulation, etc, etc.  I ran half and full marathons (13-26 miles) from the time I was 35 till I reached 62.  I'm pretty sure my circulation is good.  I'm all for preventative medicine, but let's check back in six months or a year.

I guess I shouldn't eat those ribs I bought after all.