It's Memorial Day ... when the neighborhood kids play outside in their pool, screaming at the top of their lungs listening to WAY too loud mariachi music.  It's fun.  Reminds me of when we would gather up all four of us and head out to Lake Yosemite, when it was free to enter, for a picnic by the lake.  There was no music but lots of mosquitos and ants.

We were pretty quiet as we sat on our blanket on the ground and ate peanut butter and jelly sandwiches with a little sand on the side.  My how times have changed.  I hope you remember those who have made this life possible for us today ... those who lost their lives in the fight for freedom.  Please remember the Fallen and thank a Veteran today. 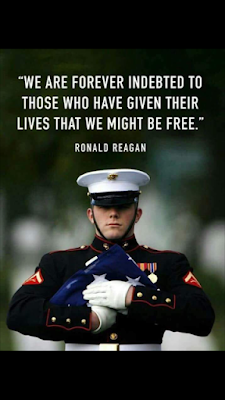 I spent the morning on the patio drinking my phony coffee and enjoying this little section of garden that has blooming things.  It's been gorgeously cool every morning as I listen to my bird buddy on the roof.  Yup ... he's still chirping away! 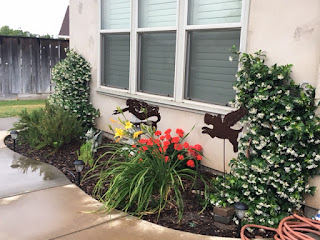 I'm not sure if these are day lilies or not, but they have decided to bloom in profusion (something you don't see in my garden much) and totally brightened up my day.  I think they have been helped by the sun and the lovely 70 degree temperatures. 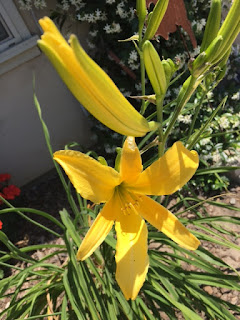 Too bad the sun also revealed the mountains of dust on my furniture.  I've put it off long enough ... time to get out the monster I drag around the floor sucking up everything in sight.  Anyone know why they make the cords so short?  I'm constantly looking for outlets.

As I braved the numerous sticky spider webs that caused much more exercise than I needed (I go crazy when I feel them on my face), I removed the remnants of two balls Cooper had destroyed.  With the longest handle I could find, I also sucked up several spiders.

I don't know where they come from since I spray my house inside and out on a regular basis.  Finally done to the point the bin couldn't hold another spider, I went to empty the contents into the kitchen garbage can.

That's when the REAL dance began!  Those darn spiders started climbing out of the can faster than I could whack them!  How could they possibly survive?  I danced around the jungle fighting for my life.  Lucky for me, they didn't survive the fly swatter!  Good grief they are fast!!  I'm always amazed at the amount of dirt that can accumulate in a house with only one person and two small dogs.

Feeling squeaky clean, I spent time with the puppies on the couch while stitching the binding on this quilt.  I think this is number 4 of 12 I took to the quilter.  I'm sure I could purchase my own machine with what it's cost me, but then I'd have to have the creativity to invent designs to quilt.  That's not going to happen. 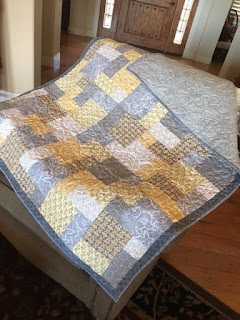 I spent the last couple hours of the day going through some of the post card collection I have from Florence and her mother.  You will be surprised by them I think.  Some are pretty racey for the day.  Over 110 years old, they are fascinating to see and read.  Many are from the Isle of Man where she was born and her family lived before emigrating to the U.S.

That's when Cooper disappeared.  Just as I was heading to bed, I couldn't find him.  I went outside to call and call, but he didn't come.  OH NO!!!  Where's my kid?  I finally found him cowering in the horse corral way out back.

Apparently he saw a kitty and decided to chase it through the big corrals full of foxtails.  Now here's something I can grow REALLY well!!  When I picked him up, I couldn't believe he was covered from head to tail and I mean COVERED!

Poor baby was jumping around like crazy as each one stuck him in his tender skin.  He's kind of a wuss when it comes to that.  Over an hour later I was finally able to get all of them out of his way too thick curly long hair.  Luckily they missed his eyes and toes.  I see a haircut in his future. 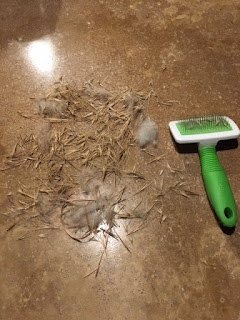 Today I'm going to work on a new project.  The National Quilter's Circle has put out a pattern with videos for a sampler quilt (one block a week), something I never thought I was capable of doing.  Turns out they are easier than they look.  I'll tell you all about it later.  The horse shears are calling Cooper's name!