It Was A Two Bagger

I tried to get to bed really early, since an early morning rising was called for.  The Elks RV Park was holding it's monthly $7 breakfast at the facility not far from my home.  The puppies weren't sure why we were going to bed when it was still light outside, but they complied.  I couldn't wait to wake THEM up in the morning.

As the alarm went off with something that sounded like Deaf Leopard, I hit the button just in time to be tackled with wet puppy kisses.  Yuck!!!  After my normal feeding-them-first duties, I noticed my hand was not too sore, but again swelling up.

It was a one bagger morning as the frozen peas took it down nicely.  Just before heading out the door, I put the brace back on.

What a perfect day for breakfast outside on the patio.  I was greeted by the usual crew already hard at work.  There's nothing like a fun morning cooking with these guys.  Not that I cook.  They pretty much know my skills, so I'm relegated to pouring orange juice and dishing up fresh fruit.

The best job I have is being the taste tester for the sausage.  We have quality control down to a science!!  I was pretty shocked to see two pans of leftover hash browns from Mother's Day, but was assured they had been frozen.  I stuffed them in the oven and sent up a little prayer that when I taste tested them, I didn't get sick.

At least these guys are respectful of a woman's taste and smell ... when the fumes of gas came wafting on the breeze, I asked them to check the ovens, one of which needed to be relit.  Amazingly, the potatoes came out fine.  Not that I ate any, I passed on those babies.  It was the Krusteaz pancakes I was after.

Definitely not on my diet, but boy howdy they are mighty tasty swimming in syrup.  Maybe it's the syrup, but tasty just the same. 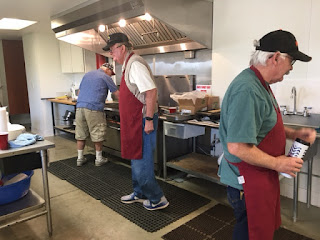 After a big cleanup five hours later (making sure they threw out any remaining potatoes and the butter that was outdated by four months), I was home with a throbbing hand.  I got out a second bag of peas, making it a two bagger day, but what helped the most was this beauty ... caramel and pretzels .... be still my heart!!  I ate the whole thing and completely forgot about my hand! 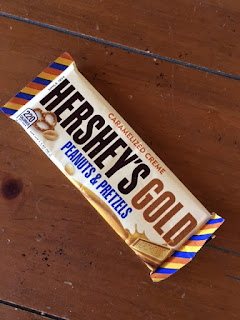 When dinner time came around, I wasn't in the least bit hungry.  Those pancakes stuck around for a long time.  The head of cauliflower in the fridge would not last long however, so I chopped it up to try out a new recipe.

I mixed up panko bread crumbs with parmesan cheese and some spices to lay underneath the pieces, then baked it for 20 minutes. The picture in the recipe didn't look anything like this.  In spite of the oil spread all over the paper, the cheese stuck to everything except the cauliflower.

It might have tasted okay with a half cup of salt and pepper.  It hasn't hit the cemetery YET, but it's VERY close.  Don't try this one ... it's awful! 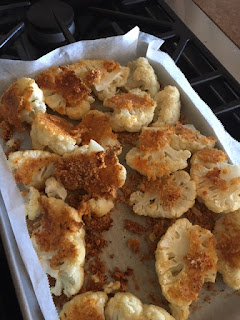 I spent the rest of the night on the couch watching baseball with my hand perched on the back of the couch.  Nurse Patty said I need to keep it above my heart.  Apparently it worked, because this morning it doesn't hurt and I can actually type!!  I really need it to heal up so I can install my new mailbox.

With my friend coming from Sacramento tonight, I really need to vacuum and clean house.  I DO however, have the perfect excuse ... my poor hand is in a brace.  I knew it would come in handy!!