A Typical Day Of Baking

With an RV Rally coming up, I have been looking for easier recipes to make for our dinners.  I found three to test drive yesterday.  First up ... Key Lime Pie.  I've made REAL key lime pie in the past and this is NOT it.  But it's quick and requires no baking.

I'm always a little leery around zesting implements, but managed to get three limes done without any blood.  Kudos to me!!  The rest is just whipping together sweetened condensed milk, cream and cream cheese along with a little lime juice. 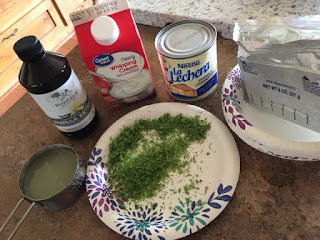 But first ... we must make the crust.  Has anyone purchased graham crackers recently?  Did you notice the crackers themselves have magically shrunk but the price has stayed the same?  So has the box.  Seriously, they are giving us three quarters the product in the same size box for the same amount of money.  Where it used to take one sleeve to make a crust, it took TWO this time. 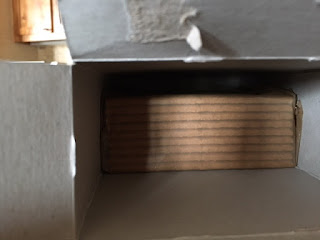 Mixed together with butter and pressed into my pan, I was on a roll.  I did discover one small detail later.  The recipe forgot the sugar in the pie crust and it really needs it. 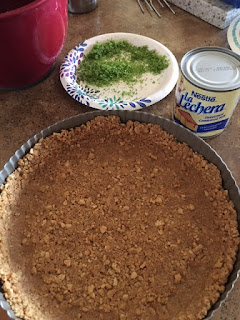 Five minutes later it was all whipped up and ready for the fridge.  Give it five hours or better yet, overnight.  I couldn't wait that long to taste it.  Not bad ... not bad at all, once I was able to get it out of the pan using two knives and a spatula!  It's actually quite tasty ... a hit in my book.  I'll crush the crackers before I go, keeping them in a zip lock bag.  This will be a quick and easy dessert.

NOT to cemetery.  It's a keeper! 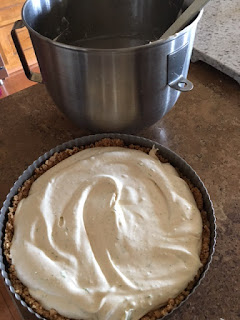 This picture just before I cut a big slice. 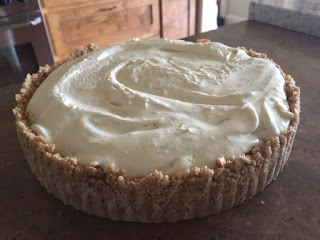 You've probably all seen the recipe on Facebook for lemon zucchini bread.  It looks amazing and would be a great addition to the continental breakfast.

You'll be shocked to know I didn't grate any extra protein into the bowl.  I think that's a first for me.  This recipe calls for olive oil.  I'm not a fan, but since I didn't have the almond milk, I figured I better keep to the recipe as much as possible.

By the way, pay no mind to that big piece of cheese stuck inside the grater that my dishwasher didn't wash out.  I finally got it clean by stabbing it with a knife until it said uncle. 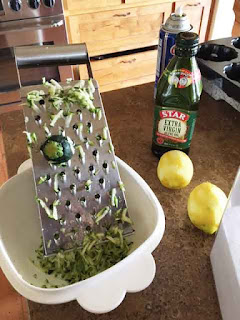 I wasn't quite so lucky with the lemon zest, requiring two bandaids before I was done. 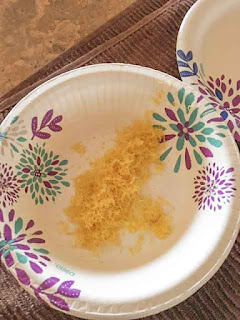 You don't even need a mixer for this recipe .... just a whisk and a stir.  I thought to try my rarely used mini bundt pan.  THAT was a big mistake.  Once the holes were all filled, I discovered it didn't fit in my Breville countertop oven.  Luckily ... and I was lucky that day ... when I took the rack out, the edges of the pan fit perfectly into the grooves.  Almost anyway, it took a little forcing.

Forty five minutes later they were done to perfection.  It took two screwdrivers and a long knife to get  the pan out of the oven.  Another thin knife and fifteen minutes of prying and banging on the counter resulted in six beautiful little cakes, except for the one that half stuck in the pan. 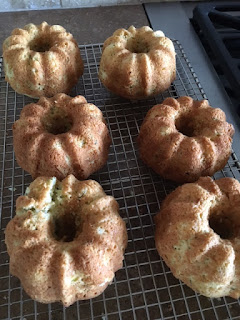 As I turned around to put the empty pan in the sink, I discovered a paper bowl on the counter.  Yup ... the one with the lemon zest in it!  Oh good grief!!  I forgot to fold in the lemon zest.  It will be okay, I told myself.  I'll put the zest in the frosting drizzle instead.

As the yucky pan soaked in the sink ... I was NOT looking forward to washing that mess ... I cut one cake in half and took a big bite.  In two seconds it was on the floor, mostly because I missed the trash can when I spit it out.

Heavens to Betsy!!!  The olive oil must have been WAY past the date.  That was the most horrible rancid tasting piece of cake EVER.  The lemon zest would not have helped, even if I DID remember to put it in!!!

TO CEMETERY WITH A CAPITAL C! 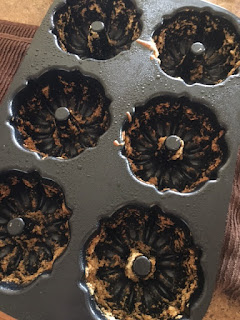 To add insult to injury, it took me almost thirty minutes to get this pan washed.  In spite of all the oil and flower I put in the wells, that stuff stuck like glue!!

It was just a typical day of baking in my kitchen.  I've got one more recipe to try out ... a chocolate no-bake cream pie.  I think I'll wait a couple of days until my fingers heal up.